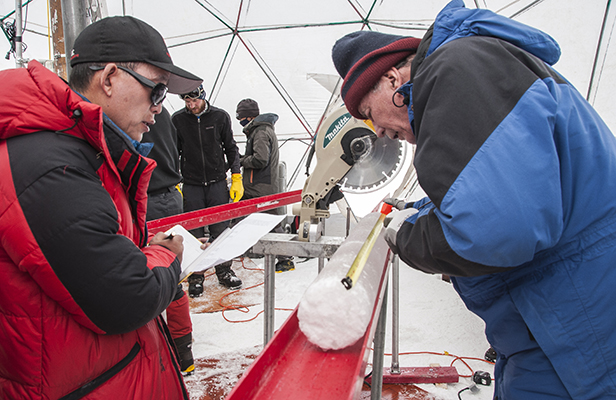 Team leaders Lonnie Thompson, BPCRC and School of Earth Sciences, and Yao Tandong, Chinese Academy of Sciences, are processing an ice core freshly drilled from the Guliya ice cap in northwestern Tibet during a joint U.S. – Chinese expedition in 2015 (see story below).

The Byrd Polar and Climate Research Center (BPCRC) is internationally recognized as a premier polar and alpine research center with a rapidly expanding focus on global climate change and environmental issues. This excellence stems from the innovation, dedication and commitment of its scientists, staff and students and strong connections to relevant academic departments.

The Center is named in honor of Admiral Richard E. Byrd, America’s most famous polar explorer.

The Byrd Polar and Climate Research Center houses one of the most impressive “libraries” of Earth’s climate history and the third largest archive of prehistoric ice core samples in the world.

Retrieving a Long Climate History From the Guliya Ice Cap

A joint U.S. – China field expedition of around 60 participants from 5 countries recovered 5 ice cores, 4 to bedrock, from the Guliya ice cap in northwestern Tibet. Cores were recovered from a large plateau at around 20,400 ft. and the summit at around 22,000 ft. This ice cap is expected to contain ice older than 500,000 years and thereby provide the longest ice core-derived climate history recovered outside the Polar Regions. The project is jointly funded by the U.S. National Science Foundation and the Chinese National Academy of Sciences (CAS) and is a major project of the CAS Third Pole Environment Program which just opened its first satellite office in the Western Hemisphere at Ohio State’s BPCRC.

To enhance understanding and appreciation of the Earth sciences for learners of all ages, initiatives include: 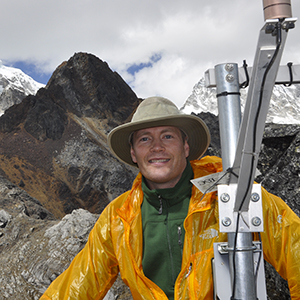 Lonnie Thompson, professor of Earth Sciences and glaciologist, has led over 65 expeditions to ice caps and glaciers on five continents, retrieving ice cores that contain a diary of past climate conditions around the globe for tens of thousands of years.

Bryan Mark (above), professor of Geography and climatologist, leads interdisciplinary geographic research that traces glacier and hydroclimatic changes to better understand the processes and impacts of climate change on different time scales in mountains and other sensitive regions around the world.

Ian Howat, associate professor of Earth Sciences and glaciologist, leads efforts to map rapid changes in the Arctic and Antarctic to improve our understanding of how ice sheets that are major contributors to sea level rise are likely to respond to future climate changes.

Ellen Mosley-Thompson, professor of Geography and atmospheric scientist, extracts high resolution ice core records whose chemical and physical properties reveal past climate variability and teleconnections between the Polar Regions and the Tropics.

Geography is a unique discipline that integrates knowledge across the social and natural sciences to provide robust ways of understanding our world. The geography minor is intended to accommodate the interests and the needs of students from a variety of areas who want to develop a coherent educational program from the courses offered. (GEOG-MN)

With this minor, students will have critical knowledge and hands-on experience to participate successfully in many public, private and international career opportunities such as government research, homeland security, environmental consulting, oil and natural gas exploration & production, international business, precious and industrial mineral exploration, mining, and processing, and more.

Graduate work in Geography Atmospheric Science with specialties in Environment and Society, Atmospheric and Climatic Studies, GIS and Spatial Analysis, Urban and Regional, and Global Studies. The program is a leader in placement of tenure-track faculty in significant positions both in the U.S. and internationally. (MA, PhD)

The graduate program examines global and environmental change, geological sciences, earth and planetary dynamics, geodesy, and geospatial sciences. By entering our graduate programs, you will become a part of one of the nation's premier research universities. (MS, PhD)