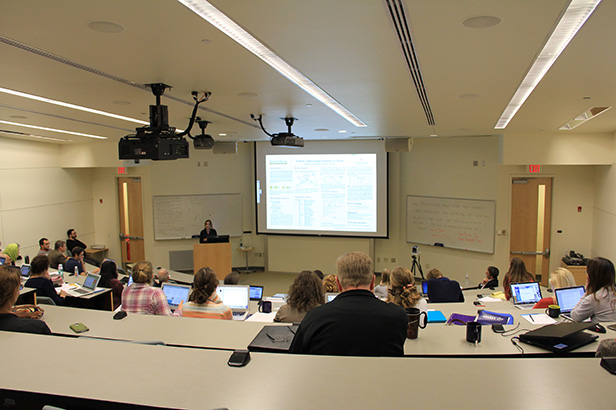 The Ohio State University Mathematical Biosciences Institute (MBI) was established in 2002, with a National Science Foundation (NSF) grant, to maximize opportunities for the mathematical sciences to accelerate progress in the biosciences. MBI is one of only eight mathematical institutes around the country and the only one dedicated to the study of the intersection of math and biology.

Our MBI scholars tackle problems and make discoveries that push the envelope for what can be done to make real progress in the biological and biomedical sciences.

This program introduces students to exciting new areas of mathematical biology, involves them in collaborative research with their peers and faculty mentors, and increases their interest in mathematical biology. The program consists of three parts – a one week program at MBI, an eight week research experience at one of seven partner institutions and a one-week conference at MBI.

MBI funding supports the work of 15-20 postdoctoral fellows annually, including:

In addition to the many Ohio State faculty members who participate in MBI, 10 to 15 faculty visitors are in residence at MBI at any one time. Each year, approximately 800 visitors attend special MBI workshops.

MBI offers emphasis programs (either annual or semester in length), current topic workshops, educational programs, and sponsored research projects in all areas of bioscience where participation of the mathematical sciences is expected to lead to important progress.

2018 SPRING SEMESTER: INFECTIOUS DISEASES: DATA, MODELING, DECISIONS
The effectiveness of improved sanitation, antibiotics and vaccination programs created a confidence in the 1960s that infectious diseases would soon be eliminated. As a result, chronic diseases such as cardiovascular disease and cancer started to receive more attention in the United States and industrialized countries. But infectious diseases have persisted and continue to be a major cause of suffering and mortality both in developing and industrialized countries. As infectious disease agents adapt and evolve, new infectious diseases have emerged (HIV in 1981, hepatitis C in 1989, hepatitis E in 1990, SARS in 2002, novel H1N1 influenza strain in 2009) and some existing diseases have recently reemerged (Zika). Antibiotic-resistant strains of tuberculosis, pneumonia and gonorrhea are becoming a major concern in many parts of the world. Malaria, dengue and yellow fever have reemerged and are spreading into new regions as climate changes occur. Diseases such as plague, cholera and hemorrhagic fevers (Ebola, Lassa, Marburg, etc.) continue to erupt and occasionally reach dangerous thresholds of global pandemics, with the 2014 Ebola outbreak originating in West Africa providing a recent example.

2018 FALL SEMESTER: ANALYZING MACRO AND MICRO POPULATION MODELS
This emphasis program will look at problems in modeling micro- and macro- populations in biological studies. From DNA molecules and viruses to humans the collective behavior of individual components gives rise to the overall dynamics of the biological system. The program will explore mathematical, statistical and biological perspectives on analyzing data from such systems and on construction of predictive models of behavior.

The Department of Statistics encompasses areas ranging from the development of methodology for data acquisition and analysis to the science of decision making under uncertainty. The emphasis in the department is to maintain innovative excellence in research that is targeted to the development of statistical methodology motivated by providing solutions to real-world problems. (MAS, MS, PhD)

The graduate program in Molecular Genetics gives graduate students the opportunity to develop their knowledge and skills in molecular biology at one of the premier research institutions in the country. Our faculty use diverse model systems to explore questions of fundamental interest to basic biology and human disease. (PhD)

Ohio State offers training in virtually every aspect of modern microbiology. Our PhD program in microbiology offers an individualized approach to graduate study in one of the nation's largest teaching and research institutions. You will actively participate in planning your graduate program while working with colleagues from around the world while pursuing your PhD. (PhD)

The Department of Mathematics offers programs of study that lead both to PhD and MMS degrees. The graduate curriculum includes courses starting at the preparatory master's level leading up to advanced research topics courses in all major areas of mathematics. Students can pursue a master’s degree in Mathematical Biology or Mathematics for Educators. (MMS, PhD)