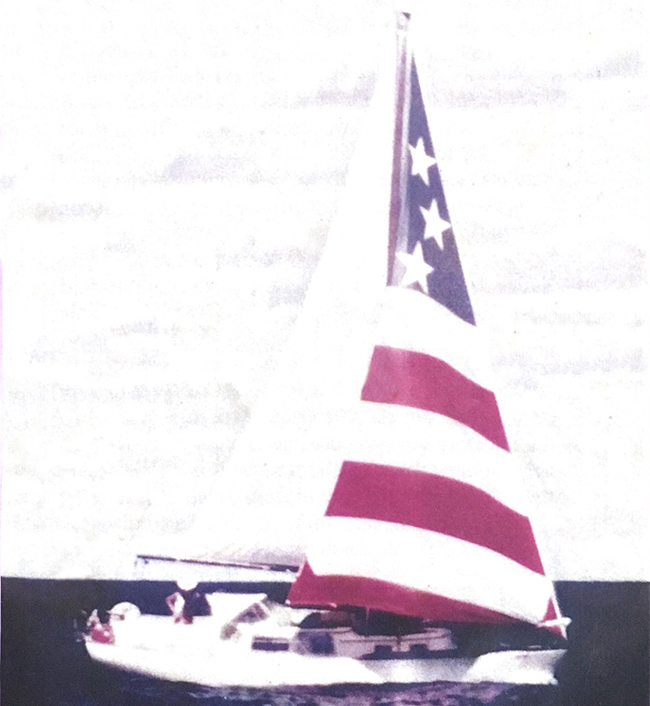 The Folly III, the 30-foot yacht Eleanor Gobrecht and her partner, Suzanne, used to sail around the Pacific Ocean.

For Eleanor Gobrecht MS ’52, life has always been about the journey — not necessarily the destination. That mindset was etched into Eleanor’s soul during her time at Ohio State and has led her to epic adventures the world over. Between sailing across the South Pacific, teaching English in Japan and cruising through the western United States in a motorhome, Eleanor has always been on the move.

Now, at 89 years old, Eleanor — who lives in Scottsdale, Arizona — continues to enjoy life and reminisce on her experiences. And though she graduated from Ohio State with a master’s degree in theater arts 67 years ago, the impact the university had on her still resonates.

My experience at Ohio State was one of the contributors to the fact that I am open to everybody,” she said. “I’m wanting to know as many people as I can and understand them.”

Eleanor moved with her family from Pennsylvania to Columbiana, Ohio, when she was a child. She attended Heidelberg College in Tiffin, where she planned to study music. The college’s band, however, was inadequate, so Eleanor chose instead to study theater.

After earning her undergraduate degree at Heidelberg, Eleanor attended Ohio State, where she graduated with her master’s degree in 1952. The university offered her an exciting theater arts program with professors such as McDowell, McGaw and Hallauer, with whom she student-directed Beggar on Horseback.

Her year at Ohio State was made even better when her sister, Esther, enrolled as a journalism major. The sisters shared housing and a few of the same classes. Esther earned her master’s degree at Ohio State as well, going on to a successful career teaching advanced high school English in Southern California. Her death in 1987 made Eleanor even more grateful for their year together at Ohio State.

After Ohio State, Eleanor went to the University of Arizona to teach and help with theater productions. She moved on to UCLA in 1954 and Glendale College in 1956. In 1963, she earned her PhD in communication with an emphasis on drama and speech from the University of Southern California.

“When I got my degree, I met a colleague, a woman named Suzanne,” Eleanor said. “She was also in what they call the soft side of the science; she was in English literature. But she was an accomplished sailor. She said, 'I want you to try and sail with me.' And I said, 'Well, I’ve never done that.’”

Nevertheless, Suzanne convinced Eleanor to sail with her and a grad student to Catalina Island, about 22 miles offshore from Los Angeles.

“It was a very small boat — nothing to hang on to but the shrouds and the side,” Eleanor said. “Suzanne said, ‘All you have to do is hang on when I say we’re coming about because the boat is going to shift drastically.’”

The boat raced west through the sea as Eleanor gazed at dolphins playing in the waves. She was so transfixed that she didn’t hear Suzanne’s warning. The vessel lurched, and Eleanor went overboard.

“They were such good sailors, they came right beside me,” Eleanor said. “They picked me up like a wet puppy, put me on the cockpit floor. I looked up and here’s these two anxious, worried faces looking at me. I let out a big laugh and said, ‘That’s the best thing that ever happened to me.’ And Suzanne said, ‘Well, you’re going to be my crew, you’re going to sail the boat with me and I’m going to get you a full set of sailing lessons for your birthday.’”

While the pair taught in the greater Los Angeles area — Eleanor at El Camino College and Suzanne at Long Beach State — they continued to explore the ocean, making longer and longer voyages as they became more adept at sailing. They would roam up the coast to San Francisco and down the coast to Mexico.

In 1969, the pair — along with Eleanor’s siamese cat and Suzanne’s poodle — embarked on their first major expedition in Eleanor’s 30-foot sloop dubbed Folly III. They sailed to Puerto Vallarta, Mexico, before trekking west to the Hawaiian Islands. They made their way to San Francisco before returning to Los Angeles to go back to work. The entire journey took about a year and covered approximately 7,500 miles.

For the next 10 years, that was how Eleanor and Suzanne lived — teaching at their respective universities and taking leaves of absences to cut through the ocean seeking new adventures. Their next long journey took them to islands dotting the South Pacific, starting at the Galapagos Islands and venturing southwest to French Polynesia, Tahiti, Bora Bora, Tonga and Fiji.

When Eleanor arrived in Fiji, a letter from her university was waiting. “They said I had to either come back or quit,” she said.

Eleanor chose to resign. It was a life-changing decision giving up the creative and tenured post she had at El Camino. She opted to step down in favor of the voyage and proceeded to New Zealand, knowing that the universe would always have something good for her to do.

After a five-month stay in New Zealand, the pair sailed up to American Samoa before anchoring the Folly III, boarding a plane and heading back to the United States, where Suzanne taught and Eleanor found work elsewhere. Another year later, they flew back to their vessel and ventured farther into the Western Pacific to New Caledonia, the Torres Strait Islands, the Solomon Islands, the New Hebrides and Papua New Guinea. 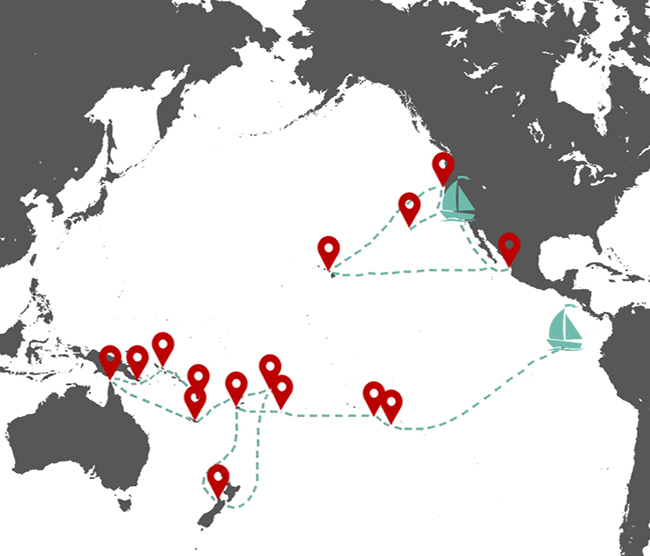 A map with some of the various locales Gobrecht visited during her sailing excursions.

That ended up being their final journey together.

“That was the end of the line,” Eleanor said. “Both our fathers were not doing well. When we set out, we didn’t really have a destination. We’d go until we didn’t want to go anymore, and I think at this point we thought we should go back.”

For nine years, Eleanor taught English in Japan, returning stateside in 1994. She bought a motorhome and tow car to explore the United States. For the following 10 years, she enjoyed her life as a work camper in parks on the Oregon, California and Texas coasts with only a small cockapoo dog named Bingo to accompany her.

Today, Eleanor spends her time attending concerts, going to plays, giving lectures and telling her stories. Recently, she was a featured storyteller as part of the Arizona Storytellers Project. The time she spent at Ohio State, she says, fueled her passion for life and adventure.