How Arts and Sciences encourages interdisciplinarity 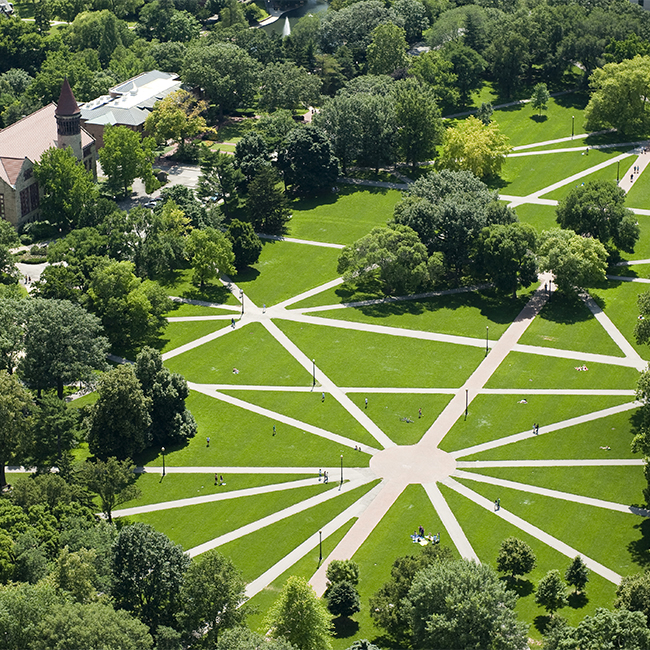 So, it makes sense that Arts and Sciences encourages innovation when it comes to teaching and learning. In 2014, the college started challenging faculty to develop interdisciplinary, team-taught courses. The idea is to take strengths of the college’s wide-ranging academics to shed light on subjects from a variety of perspectives. Disciplines ranging from history to biology to political science to geography naturally converge with each other, and the college endeavors to identify and examine those intersections to best equip its students as they enter a diverse and dynamic world.

“I don’t think the world comes packaged with disciplinary problems,” said professor of philosophy Justin D’Arms. “It confronts us with things that require thinking in a bunch of different ways.”

“We hope to have students appreciate nuance — that things aren’t simple,” said Jesse Kwiek, associate professor of microbiology. “If you start changing your perspective, you start seeing things differently.”

While Arts and Sciences offers a vast range of courses that break down traditional disciplinary barriers, three in particular highlight the breadth and depth of the college’s academic offerings:

HIV: From Microbiology to Macrohistory

It’s best to view a topic as expansive and nuanced as HIV through multiple lenses. The course, “HIV: From Microbiology to Macrohistory,” does just that.

The class is co-taught each spring by Associate Professors Jesse Kwiek of microbiology and Thomas McDow of history. The course follows not just the global and historical expansion of HIV, but also its evolution at the molecular level.

“We thought we could put a really interesting course together using HIV as an organizational framework to think about the intersection of sciences and the humanities,” McDow said. “It comes from history, which is my field, and microbiology, which is [Kwiek’s] field. But along the way, it also helps us think about ethical issues, public health, power, equality and empathy.”

McDow approaches the course from an archival perspective, delving into global historical accounts of the HIV epidemic. By studying the social, economic and political conditions of different regions of the world over the years, students explore how the virus’s path has been influenced through time. Kwiek examines the physical progression of HIV and analyzes the trail of its existence and evolution through a microbiological context. How does the HIV microbe cause disease? What is the virus-host interaction? Why isn’t there an effective vaccine for the virus? Questions like these are asked and discussed. 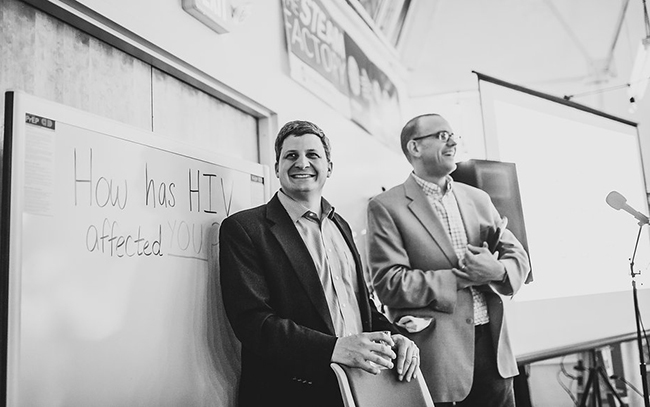 Associate professors Jesse Kwiek (left) of microbiology and Thomas McDow of history at the STEAM Factory for an event that concludes their co-taught course on HIV. Photo courtesy Paul Woo, Wandering Woo Photography

McDow and Kwiek combine their two approaches, which interconnect seamlessly over the course of their lectures. Both professors work in tandem to present their material harmoniously.

“We both go to every single class,” Kwiek said. “When he’s talking about history, I’ll chime in about the microbiological side and vice versa. … Our goal is not to make it half microbiology and half history. It really was to mix them together and use the tools from both disciplines to get a deeper understanding of the epidemic.”

The course concludes with students conducting a group presentation at the STEAM Factory, Ohio State’s grassroots collaboration facilitator based in Columbus’ Franklinton neighborhood. The event attracts representatives from local health organizations such as the Ohio Department of Health, Columbus Public Health and Equitas Health.

“The students have all really bought into the concept,” said Zach Reau ’11, HIV Prevention Program manager at the Ohio Department of Health. Reau, an alumnus of the sociology department, has spoken to the class its past two iterations. Though he couldn’t speak on behalf of the Ohio Department of Health, the course’s value and its impacts on students were evident to him. “It gives me hope for the future that we have a bunch more folks going out into the world who are future leaders that really understand in a lot of different nuanced ways how HIV transmission occurs and what those drivers are and how it impacts people’s lives.”

The list of health disparities between black and white America is a troubling one.

On average, white Americans live four years longer than black Americans. Infant mortality rates are twice as high in black babies than in white babies. Black women are three to four times more likely to die from pregnancy-related complications than white women. Black Americans are twice as likely to develop diabetes as their white counterparts.

Racial health disparities have long been an issue for Dr. Quinn Capers, a cardiologist at the Wexner Medical Center and associate dean for admissions in the College of Medicine. After watching a black man and a white man receive different treatment for the same ailment when he was a resident trainee at an academic medical center in Atlanta, Capers was fueled with a desire to raise awareness of such inequalities. In fall 2018, he co-taught an undergraduate course around the topic called “Race and Medicine.” The class is housed in the Department of African American and African Studies (AAAS) and is co-taught by AAAS postdoc Eric Herschthal, a historian and journalist whose areas of expertise include race, slavery and medicine. 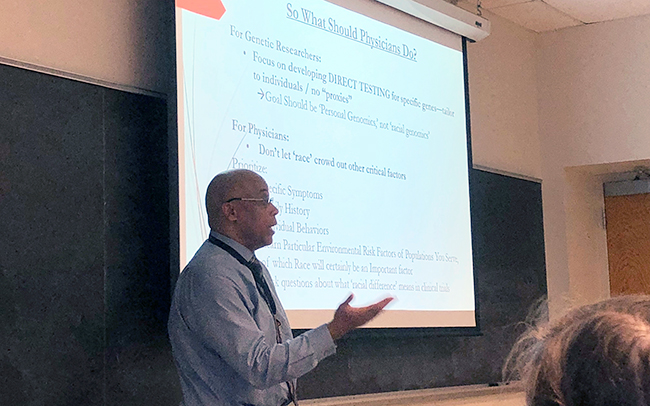 Dr. Quinn Capers presents on racial health disparities for the course he co-taught, “Race and Medicine."

“Having Dr. Herschthal involved really allows us to talk about not just contemporary healthcare disparities, which I consider my expertise, but he really allows us to go back and see kind of where this started,” Capers said. “I think interdisciplinary education can be really helpful in cementing a concept. We can talk about how the health care system treats [African Americans] today, but we’ve got this incredible historical component. I think that’s an incredible one-two punch.”

“Race and Medicine” examines the ways in which black and white Americans receive health care differently, explores their historical background and root causes, and discusses potential solutions to these inequities. Students learn about the history of medical mistreatment of black Americans, how implicit bias influences medical treatment of African Americans, the connections between race and genetics and how systemic racism perpetrates racial health disparities.

Capers and Herschthal agree that while the course’s subject matter is vital for students entering medical school, it is just as important for students who have career interests ranging from journalism to law to economics.

As the understanding of genetics continues to grow, so too does the list of the field’s ethical and legal ramifications.

How do genetics influence human traits such as aggression or altruism, and how does that affect our responsibility for our behavior? How does one’s genotype impact gender or sexuality? What are the boundaries of genetic privacy, and how can genetic information be shared?

These kinds of questions will be explored by Professors Susan Cole of molecular genetics and Justin D’Arms of philosophy in the new course, “Genes and Society.”

“Genetics is a science that has exploded and is continuing to explode in a lot of ways,” Cole said. “And ethics is about how to be human. So, I think we’re making that connection between the science that we do and questions about how we should treat each other as individuals and within society.”

Cole devised the course as a way to confront the growing interest she had in the ethical dilemmas surrounding genetics as she taught courses on the subject. She began collaborating with D’Arms, who had always been interested in exploring the roles genetics and technology play in behavior and morality.

The two professors connected in spring 2018 and worked on the curriculum and course proposal over the following summer. The class was approved February 2019 and is scheduled to begin spring 2020.

The course will shed light on classical and modern genetics while highlighting the inherent social and ethical issues. Students will start by discussing genetics and how an individual’s genome influences their characteristics. Once a general knowledge of genetics is established, the course will pivot to examining the philosophical questions that accompany genetic inheritance.

“We’re going to have ‘genetics boot camp’ and ‘ethics boot camp’ so all the students have vocabulary in common,” Cole said. “Then, I think we hope to run this as a discussion and active-learning based course where Justin and I are both there all the time.”

The course will have no prerequisites and is intended to appeal to students with interests in a variety of disciplines, not only philosophy and genetics. Cole and D’Arms hope students who complete the course will understand that science and humanities don’t have to be mutually exclusive. Science informs many aspects of society, and ethical thinking must inform the practice and the impact of science.

“I would like our students to emerge from the course with a sense that they have a responsibility to think about these questions,” D’Arms said. “And I would like them to feel that they have the facts and the tools to do that thinking productively.” 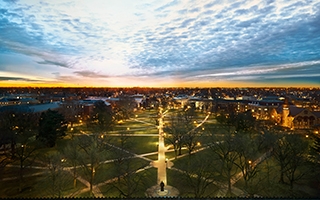