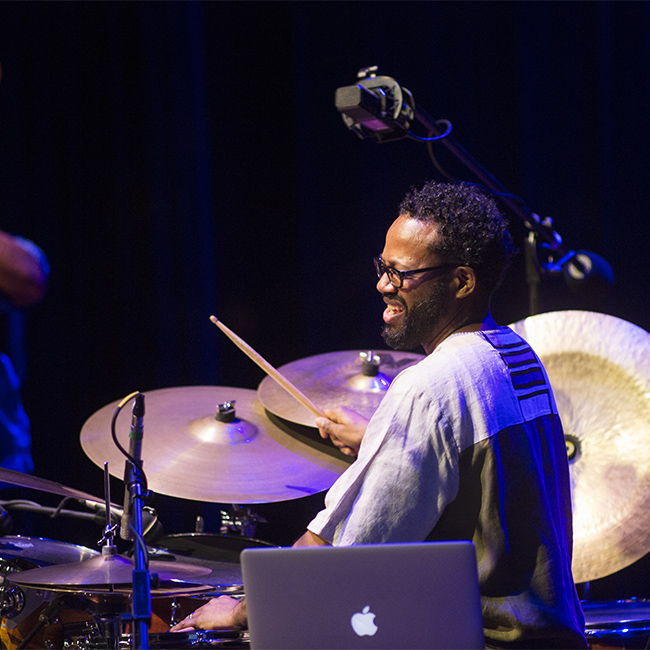 Mark Lomax performs at the premiere of 400: An Afrikan Epic | Photo by Maddie McGarvey

With 2019 being the 400th anniversary of the start of the Transatlantic slave trade, composer, educator, musician and activist Mark Lomax ’07, MM ’10, DMA ’10 knew he had to do something that would tell this story. That impulse became 400: An Afrikan Epic, an ambitious 12-album cycle.

“I found that no one I knew was thinking about ways to tell this important story, so I decided to compose, record and release 12 albums that give artistic snapshots of the past, present and future of Africa and the diaspora with respect to accept and heal from the impact of slavery and colonization,” Lomax said.

The cycle, which was completed with assistance from a Wexner Center for the Arts Artist Residency Award, was released to great acclaim (All About Jazz called it “essential”) and to a sold-out world premiere in Columbus’ legendary Lincoln Theatre.

And that was just the start.

The three-time Ohio State graduate — he received his bachelor’s, master’s and doctoral degrees from the School of Music — was also recognized by Columbus City Council for his work, received a Congressional Recognition from Rep. Joyce Beatty (OH-03) and was honored with an Individual Artist Award at the Ohio Governor’s Awards for the Arts, an honor given to an “Ohio artist whose work has made a significant impact on his or her discipline locally, statewide, regionally, or nationally.” He also returned to the School of Music to teach a course on African American musical traditions.

For the lifelong musician, it was a year of receiving due recognition as a major artist, pushing boundaries and creating ambitious and powerful work.

Was there a particular class at Ohio State that really impacted you?

A class with Linda James Myers (professor, Department of African American and African Studies) changed my life! Her book, Understanding an Afrocentric Worldview: An Introduction to Optimal Psychology, gave me the framework and language that undergirds my work to this day.

What did it mean to you to receive a Wexner Center residency award?

As a student, I found refuge and inspiration at the Wex. Academically, school was easy, but it was much more difficult socially. The Wex offered a space where I could reflect on contemporary masterpieces, center myself and envision myself among the great artists of the world. The inspiration drawn from my experiences with the art at the Wex helped me find the strength to push through and finish each degree, so being recognized as a resident artist is extremely special. The support the Wex gave allowed me to experiment and theorize. 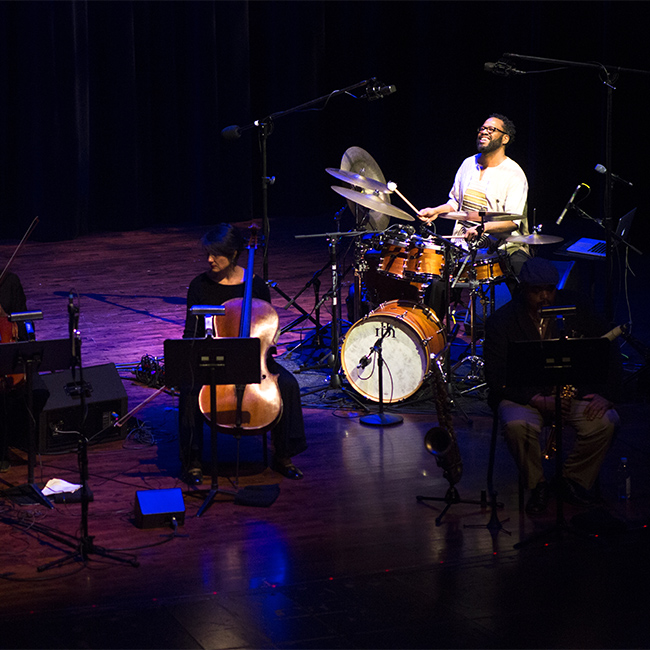 Can you tell us about your class on African American Musical Traditions?

It’s an overview of the history of music in America.

For example, you take a song like “Say it Loud — I’m Black and I’m Proud” and you tell the story of how it brought communities together. It gives the piece more meaning. Anybody can hear the drums and may not be able to describe it technically, but we can ask why is the drummer doing that? Or why is the vocalist doing that?

Anybody from Sam Cooke to Whitney to Marvin to Aretha to Louis to Coltrane, you ask why did they play the way they play and give it more context.

I’m asking students to do active listening: What do you hear? What do you think? Why are you listening? Actively engaging with art, regardless of its form, is a skill that is being lost because of ease of use and access.

What are the origins of 400: An Afrikan Epic? What is the story you want to tell?

2019 marks the 400th commemoration of the Ma’afa (great tragedy), which is a Kiswahili word used to represent the trans-Atlantic slave trade and the arrival of the first enslaved Africans in North America.

The institution of slavery negatively impacted all who participated directly and indirectly. Descendants of enslaved peoples continue to suffer from epigenetic changes as a result of ongoing trauma. Those who descend from people who financed, captured, owned, oversaw, lynched, raped, beat and otherwise oppressed and benefited from profits gained from 246 years of forced labor and an additional hundred years of the Jim Crow-style American culture, have also been negatively impacted, though in ways that aren’t always obvious.

400: An Afrikan Epic seeks to celebrate the beauty, strength and resilience of a people who, against all odds, continue to create culture where there is none and thrive in parts of the country and world where others couldn’t survive. The work also seeks to establish productive dialogue between those who have lived with the trauma of slavery and colonization and those who have been socialized to believe in, and benefit from the institutions and systems built to perpetuate the inhumane values that birthed the practices. 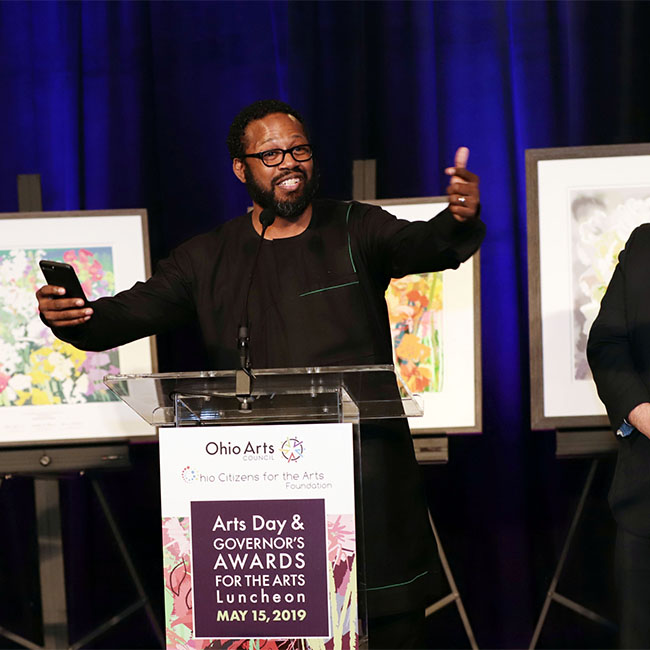 400 is also a product of collaboration—can you tell me a bit about the collaborative process for you?

I’ll be working with seven ensembles across the 12 recordings. I’m excited to be working with Olev Viero and the Greater Columbus Community Orchestra (Uhuru); the Columbus-based cello quartet UCelli (4 Women); an Atlanta-based Afrikan drum ensemble Ngoma Lungundu (First Ankcestor); my Urban Art Ensemble (Ma’afa); trio with saxophonist Edwin Bayard and bassist Dean Hulett (Ankh & the Tree of Life, Up South); my quartet, which adds pianist William Menefield to the trio (Song of the Dogon, The Coming, Songs of the Orisha, Tales of the Black Experience); The Ogún Meji Duo (Spirits of the Egungun); and some solo work (Afrika United).

We are also curating a website featuring the work of 400 artists from Africa and the diaspora. This is an effort to elevate black artistic excellence beyond popular culture. I hope this site will become a starting point for anyone interested in learning about art and culture and how we are telling our stories through our work.

It was an experience on the whole that changes you, and you literally manifest something out of nothing. It changed me. I’m not sure what that means yet, but I appreciate it and I’m looking forward to process what that means and what will come of it.

An overview of 400: An Afrikan Epic

From thousands of years of history on the African continent to the trans-Atlantic slave trade to a journey into the optimistic future of the African diaspora, Lomax’s 12-album cycle is a deep and wide-ranging epic.

Here’s a look at each album in the cycle.
Listen to samples and read more about the project.

Alkebulan: The Beginning of Us

Afro-Futurism: The Return to Uhuru 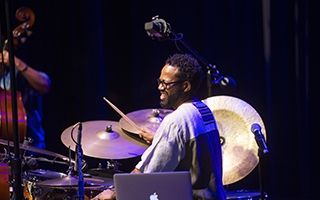