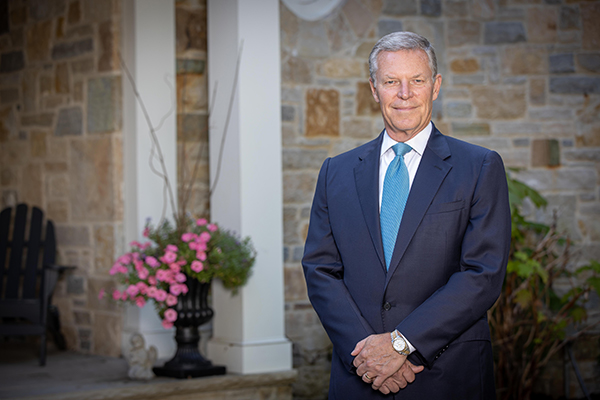 As the retired chairman and CEO of paint giant Sherwin-Williams, Chris Connor ’78 takes pride in his Midwestern upbringing and his liberal arts education at Ohio State — and believes others in the business world should take note, too. And they are.

As Connor knows from visiting the business students that he and his wife, Sara ’80, support in an experience learning program in Nepal and India, Ohio State is recognized around the world. He even found a little shop in India selling Brutus Buckeye figurines.

Hailing from Akron, Ohio, Connor arrived at Ohio State in 1974, initially starting on a pre-medicine track before declaring a major in sociology.

“I just realized that when I was taking the liberal arts classes, that those were the books that I just could not wait to crack open,” Connor said.

He graduated with his sociology degree in 1978, and perhaps unexpectedly, it turned out be particularly useful as he started his career in advertising first at an agency before moving to Sherwin-Williams.

“Sociology is the study of the mass movement of society — what causes groups of people to act and interact,” said Connor, “[For example] to get groups of people to buy your bucket of paint as opposed to your competitors’ or to take advantage of your company’s goods and services.”

While Connor steadily climbed his way to the top of management, it was never the goal in his mind in his day-to-day work. He focused instead on mastering the job at hand, earning the respect and trust of colleagues along the way.

“I wasn’t the brightest financial guy in the company. I didn’t have the academic background. I wasn’t the best chemist that could formulate amazing paint products,” he said. “What I was, though, was the kid with the liberal arts background who knew a lot about communicating and leading and encouraging people to come together for a cause more important than themselves.”

When it comes to recruiting graduating seniors for positions at Sherwin-Williams, Connor and his team actively look for that spark, curiosity and leadership over academic performance alone.

“I looked for the kid who did not have all the answers, but knew how to learn, think and ask good questions,” he said. “I’ve found over the years that students with liberal arts degree have a much stronger ability to soar in complex environments.”

In addition to degree alone, Connor says that meaningful experiences on a resume make an impact on employers like him.

“When doing interviews, I always go to the bottom of the resume — to those experiences that really create this nuance of who you are as a person,” he said.

Today, those experiences may be education abroad experiences supported by generous donors like the Connors, or they may be a job or volunteer experience that demonstrates hard work and grit.

Along with that well-rounded education, Connor credits his Midwestern work ethic to his success.

“[Recruiters say] we are moldable, coachable. We’re curious people who can step in and learn quickly how to embrace new directions. I’ve always thought that was a compliment.”

And what better place for recruiters than Ohio State? “Every year, 12,000 new, fresh, bright young talented people are showing up on our campus to change the world,” Connor said. “The odds are in our favor, and others are taking note.”