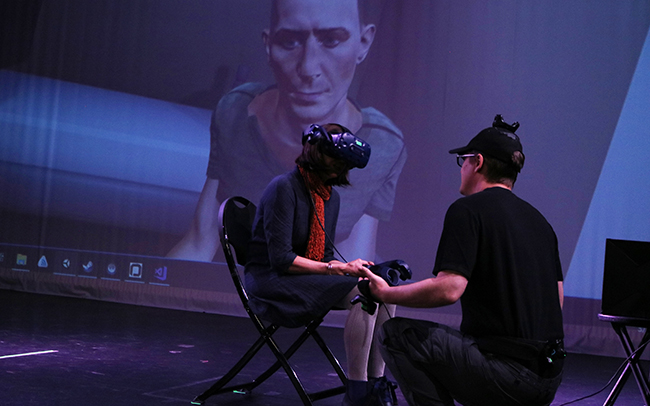 Alex Oliszewski, right, associate professor of theatre and ACCAD, virtually performs the role of a person caring for someone with dementia.

The scene is chaos. You’re standing on a subway platform. A bomb has just exploded, the ground is charred, people lie injured in front of you and it’s your job to assess the victims.

Except you’re not actually standing on a subway platform, a bomb hasn’t exploded and everybody around you is fine.

That’s the power of virtual reality, a growing technology that has the ability to substitute a user’s physical reality with a digital one.

Users don a special headset that replaces their field of view with a computer-generated display and allows them to move in a virtual 3D space and observe the world in real time. Depending on the virtual reality application, users can also use handheld controllers to interact with objects and avatars in their virtual environments. From replicating an emergency scenario to train first responders in the aftermath of an explosion to allowing caregivers the opportunity to walk in the shoes of someone suffering from dementia, VR has a seemingly unlimited potential to enrich learning, training, storytelling and entertainment. 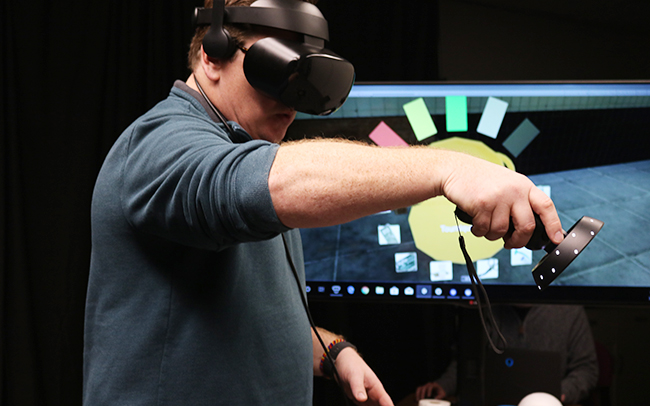 Triaging victims of a virtual disaster.

At the Advanced Computing Center for the Arts and Design (ACCAD), researchers from a variety of academic backgrounds are helping lead the effort to push this new medium forward in an exciting, dynamic and pedagogically engaging way.

“We want to use this technology as the powerful tool that it is for meaningful human pursuits and the pursuit of knowledge,” said Vita Berezina-Blackburn, an animation and motion capture specialist at ACCAD. “It is wonderful to have an opportunity to do it in a multidisciplinary setting like ACCAD.”

“This is why I want to be at Ohio State and why I want to be at ACCAD,” said Professor Maria Palazzi, Ohio Eminent Scholar in the Department of Design and former director of ACCAD. “Everything is based on collaboration in the sense that it requires different kinds of disciplinary knowledge.”

Two virtual reality projects currently under development at ACCAD — in collaboration with the Ohio State Wexner Medical Center — leverage the technology’s ability to train medical personnel and first responders without a fear of real-world consequences.

The first project, which is funded by the Agency for Healthcare Research and Quality and the National Institutes of Health, is a training simulation that drops emergency response personnel into a scene in which the user is tasked with triaging victims of an explosion.

The user must identify uninjured bystanders and use voice commands to get them away from the blast zone. The user is then able to walk or teleport to each victim and use tools in a virtual triage bag to apply the appropriate lifesaving treatment. Lastly, users identify each victim with a color tag that indicates further treatment needs. 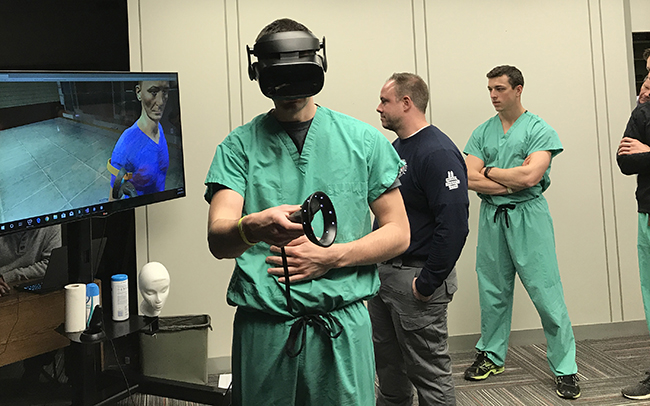 The virtual training program is tailored after real-world disaster preparedness training emergency personnel go through, often including volunteers, emergency vehicles such as ambulances and fire engines, fake injuries and actors to create an immersive training scenario.

Setting up real-world training simulations, however, takes time and resources, and because of the expense and the amount of parties involved, performing live mass-causality incidents regularly is difficult.

“Once a VR scenario is built, it is easy to replicate the experience as well as vary the conditions so that emergency medical personnel can train in it over and over again,” Palazzi said.

The second project — which is a collaboration with faculty and staff in the College of Social Work and includes funding from the Ohio Department of Medicaid through the Medicaid Technical Assistance and Policy Program (MEDTAPP) for the statewide Medicaid Equity Simulation Project — provides insight into the struggles of both caregivers and loved ones suffering from dementia.

Dreama Cleaver was an MFA student in design and studying at ACCAD when she had the role-playing idea after experiencing struggles as caregiver for her mother, who had dementia. She was inspired to create this scenario when she felt physicians didn’t understand the nuanced dynamics of her and her mother’s relationship, and the project is meant to promote empathy and understanding among those who work with people living with dementia and their caregivers.

Cleaver and staff at ACCAD developed an immersive theatrical virtual reality experience in which two people interact in the same digital space. One person is an actor who plays the role of caregiver, while the other is a volunteer whose experiences mimic the experiences of someone with dementia. The experience highlights the effects of short-term memory loss as well as time and place disorientation, which are common dementia symptoms that are difficult to simulate through other forms of dementia care training.

Though the VR project doesn’t necessarily capture what it feels like to have dementia, it presents the user with experiences that may induce confusion, anxiety and reduced concentration — symptoms common in people living with dementia.

“When you progressively experience the lack of control over your environment, you start reacting in a way in which you begin to relate to people living with dementia.” Berezina-Blackburn said. “Users in the experience get frustrated or anxious or withdrawn, and it’s a completely understandable human reaction. That ability to somewhat demystify that aspect of dementia and make it more understandable and human ... that feels really powerful.”

The next generation of VR creators

Every technological breakthrough has humble beginnings, and virtual reality is no different. Two graduate students at ACCAD are at VR’s forefront, and their respective projects are laying the foundation for its future.

Tori Campbell is an MFA student in the Department of Design and a graduate research assistant at ACCAD under the supervision of Berezina-Blackburn.

Campbell’s project, “Designing for Narrative Performance in Virtual Reality,” is a new way to engage participants in historical narratives as a way of building understanding. In this case, Campbell is using a part of the story of Ruby Bridges, the first African American child to desegregate the all-white William Frantz Elementary School in New Orleans.

On Nov. 14, 1960, Ruby — escorted by her mother and four U.S. marshals — walked to school. On her way, she passed crowds of people yelling slurs at her, throwing things and chanting that they didn’t want the school to desegregate.

Campbell’s project — which she co-created with design MFA student Abigail Ayers — transports users to the civil rights era and leads them down the path Ruby walked. After donning the headset, the wearer finds themselves sitting in a car with Ruby’s mother and a pair of federal marshals. The car parks, and the user can see and hear the throngs of protesters outside. On the walk into the school, a voiceover supplied by the real Ruby Bridges recounts her thoughts about that fateful day. 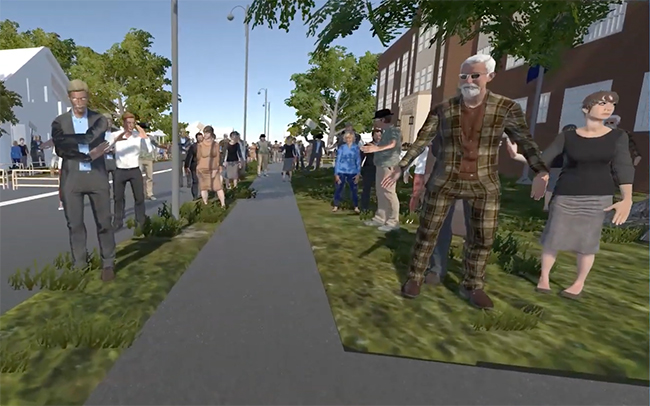 A screenshot from "Designing for Narrative Performance in Virtual Reality."

Though it’s impossible to convey exactly how Ruby felt during her harrowing journey to school that day, the experience is a way of telling her story from an immersive new perspective.

“You’re not going to feel exactly like Ruby Bridges,” Campbell said. “But it can enable you to participate in a similar experience and help to induce empathy and perspective taking.”

Kevin Bruggeman’s approach to virtual reality has less to do with storytelling, but the story behind his inspiration for his project is worth telling.

Bruggeman, who is pursuing an MFA in the Department of Design, developed a way to experience mindfulness-based stress reduction (MSBR) in virtual reality after his mother was diagnosed with cancer. He helped her through the ordeal, but there was little he could do to ease the stresses and anxieties that accompanied her chemotherapy. His mom eventually beat cancer, but Bruggeman never shook his desire to help others facing similar anxiety-inducing conditions.

That’s when he created The Hiatus System, a virtual reality application designed to promote meditation, mindfulness and relaxation.

After a user puts on a VR headset and loads The Hiatus System, they find themselves in front of a temple designed by Bruggeman, who was influenced heavily by several temples in Kyoto, Japan. Once the user is comfortable with their new virtual environment, they start a guided meditation process based on MBSR. During the guided meditation, the user sees two circles that expand and contract. One is a breathing guide, and the other swells and shrinks in real time to the user’s breathing, which is monitored by a belt worn around their stomach. The user is meant to sync the two circles, which promote breath awareness and mindfulness by encouraging controlled, intentional breathing.

When a user experiences The Hiatus System, two circles that indicate breathing will appear in front of them.

“It’s all based on noticing your own breath, noticing the thoughts that run through your head,” Bruggeman said. “It’s about getting you out of that aspect of worrying about past things or future things and just being in the moment of what you’re doing.”

One of Campbell’s favorite films is Waking Sleeping Beauty, a documentary about Walt Disney Animation Studios during the 1980s and 1990s.

The documentary focuses on the studio’s transition from traditional, two-dimensional animation to blending traditional and computer animation together. Campbell draws parallels between that technological breakthrough in animation and the work she’s doing now at ACCAD.

Virtual reality is a relatively new venture — an exciting journey into an unknown technological frontier. Campbell compares the timeline of its progression to how listening to music has evolved over the years.

“It’s like how you had a cassette player, then a CD player, and now you have a smartphone or iPod,” she said. “They’re going to look back, and I’m going to be the cassette player. It’s still so fresh.”

“It’s uncharted waters still,” said Kyoung Swearingen, an assistant professor of design. “There are a lot of things that still need to be explored and experimented with.”

The Medicaid Equity Simulation Project is funded by the Ohio Department of Medicaid and administered by the Ohio Colleges of Medicine Government Resource Center. The views expressed in this publication are solely those of the authors and do not represent the views of the state of Ohio or federal Medicaid programs. 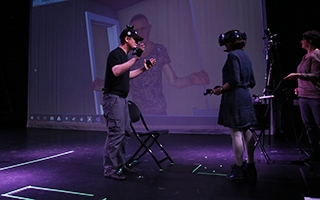