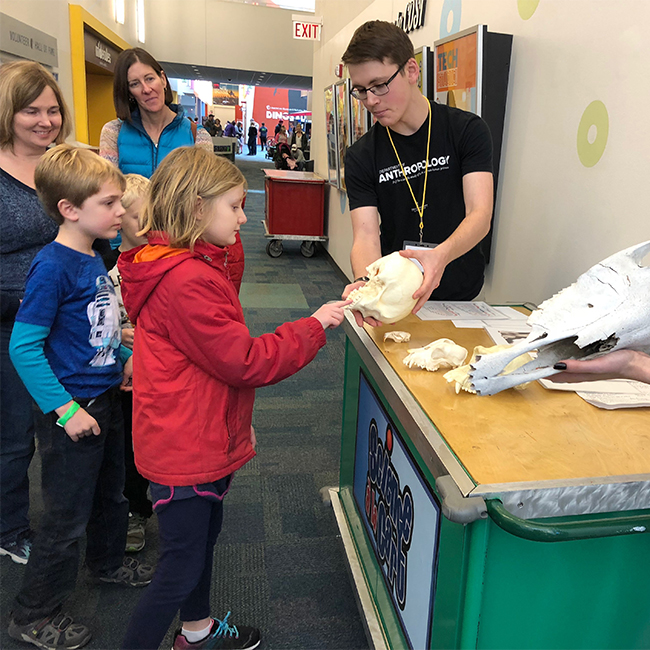 One outreach project included students hosting interactive carts at COSI, where APOP members engaged with children and their parents and led them through mini-exhibits about physical anthropology, bioculturalism and archaeology.

It’s called APOP, and it’s gaining support not just at Ohio State, but also in the greater Columbus community.

APOP stands for the Anthropology Public Outreach Program. Created in November 2016, APOP began rolling out projects in January 2018 with the objective of increasing understanding of humanity, promoting cultural awareness and exploring what makes humans, well, human.

“The goal is to make sure we are allowing people to make their conclusions by building perspective,” said APOP program director Mark Hubbe, an associate professor of anthropology. “So every single activity we do — it doesn’t matter what the topic is about — you have an enlarged perspective of what humanity is.”

In 2016, several white nationalist, anti-diversity propaganda flyers were posted around the Ohio State campus. This caught the attention of a number of faculty, graduate students and undergraduates in the Department of Anthropology.

“You still have people with very extreme ideas,” Hubbe said. “So we had a meeting organized by the graduate students to see what we could do as a department, to do our part, to change the situation. There was a lack of information, a lack of education, about human diversity and about social inequality.”

Thus, APOP was born. But it would take some time before the program really got off the ground.

“That’s when we started inviting the undergrads to help us,” said Emma Lagan, a PhD student in anthropology. “We really wanted to give them some experience in designing and writing. Each one of them wrote a proposal saying, ‘This is what the point of it’s going to be, this is how we’re going to teach, this is how it’s going to be interactive.’”

So the APOP team spent the year deciding what kind of projects they wanted to pursue, how best to create a sustainable program and designed three pilot programs to kick things off.

The first project consisted of a resource database aimed at helping K-12 teachers integrate anthropology into their classrooms. The second was geared toward Ohio State undergraduates, who participated in small workshops that use football fandom to illustrate points about diversity and human behavior. The third project introduced interactive carts at COSI, the hands-on science center in Columbus. The mini-exhibits run by anthropology students included two archaeology carts, three physical anthropology carts and one biocultural cart.

“It’s nice to feel like you’re actually familiar with the material because you can teach it back,” said Kimberly Whitman, who graduated with her bachelor’s degree in anthropology in 2018. “Half of all learning is being able to tell other people about what you’ve been learning.”

APOP’s popularity spawned more projects and collaborations during the 2018-2019 year. The program participated in COSI’s Columbus Science Festival in May, implemented an outreach program that introduced human evolution classes to Columbus middle schoolers and introduced a lecture series at local libraries in which faculty presented on their research. APOP also began curating a “Fossil of the Month” display in Smith Laboratory that showcases fossils related to human evolution and runs the A Story of Us podcast, which wrapped its third season and reached 100,000 listens in May 2019. The group also began crowdfunding efforts to support an exhibit at COSI designed to explore human evolution in a way that is understandable for visitors of all ages and backgrounds.

While APOP has engaged many in the community over a short period of time, the impact of the program is also felt within the department.

“It’s really helped people collaborate a lot more and know each other,” said graduate student Leigh Oldershaw. “Before APOP started, there really wasn’t that much opportunity to really get to know faculty members you didn’t work really closely with or undergrads you hadn’t had in your class.”

APOP is always looking for more volunteers, and the program is a great way for students, faculty and staff to get plugged into the world they’re a part of — to make a difference.

“It’s been a learning and rewarding experience for every one of us involved,” Hubbe said. “APOP and its different activities are helping change our view of the world.”

To keep tabs on APOP’s events or to donate, visit u.osu.edu/apop. 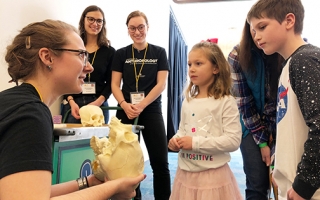