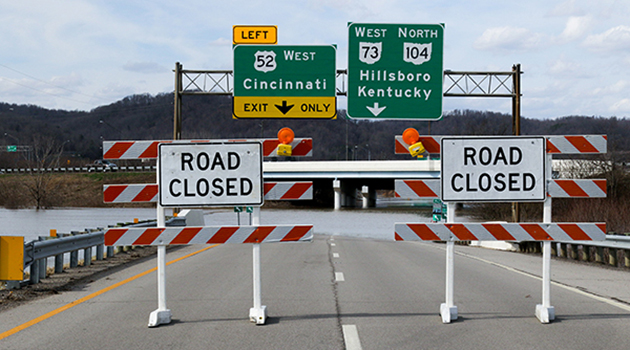 Climate change is often depicted with broad, faraway examples: glaciers melting and 70-degree days in the Arctic, endangered species dwindling in Asia and Africa,  and coastal flooding in places like Florida and Louisiana.

But back home in Ohio, the effects of climate change are being felt in ways you might notice more than you realize.

Impacts in the Buckeye State can be general, from longer drought periods to changes in farming seasons. The impacts can also be surprisingly specific.

“What does climate change mean for Ohio? Well, for me, it means putting bigger gutters on my house,” said  Bryan Mark, a professor in the  Department of Geography  who also serves as Ohio’s state climatologist. “I moved about four years ago, and the roof was in pretty good condition, but it was pretty clear to me within the first couple rainfalls that our gutters were inadequate.”

Mark is the third state climatologist of Ohio, taking over for Jeff Rogers in 2015. The position is unfunded and was not quite in Mark’s wheelhouse when it was offered to him, but instead of declining, he saw the offer as a chance to refocus.

“Here in Ohio we’re facing some pretty stark, reality-changing environmental nudges through climate change that are really important for us to get our heads around,” Mark said. “So I saw this as an opportunity to redo this as an office.”

Instead of being a single position, the state climatologist now resides within the  State Climate Office of Ohio  (SCOO), which is based at Ohio State.

Aaron Wilson, a senior research associate at the Byrd Polar and Climate Research Center and OSU Extension who is also part of SCOO, points to many examples of climate change’s current impacts in Ohio.

Your daily commute has likely been affected. Just last summer and once again in March, central Ohio dealt with flooding on Interstate 71  that closed road. Flooding also caused road closures recently in Licking and Green counties.

Recognizing weaknesses in existing infrastructure, the Ohio Department of Transportation (ODOT) put together an  Infrastructure Resiliency Plan  in 2016, a 120-page document dedicated to showing ODOT’s vulnerabilities to climate change and extreme weather events.

“We’ve got infrastructure that’s based on past historical precipitation that’s not well-suited for the types of precipitation events we’re seeing now and expect into the future,” Wilson said.

Less snowfall is another noticeable impact. Mark, who has lived in the state for 15 years, has only taken his children sledding a handful of times. He’s noticed a huge increase in tick populations in forested areas. Tick  and other  insect populations that prefer warmer climates  are blooming in Ohio, and with them comes more instances of sicknesses like malaria and Lyme disease.

The seasonal redistribution of rainfall could be problematic as well. Ohio is experiencing more rain in the fall, winter and spring and less in the summer, causing drought-like summer conditions that impact growing crops. Extra rain in the spring and fall means less time to plant and harvest crops as well.

And while climate change can often be thought of as causing 100-degree days more often — which isn’t the case here in Ohio — the real impact, Wilson said, is in the increased low temperatures overnight. Instead of temperatures cooling off when the sun goes down, Ohio is seeing many more days where the low never drops below 80. Especially in the center of Columbus, where temperatures can get as high as 24 degrees warmer than locations along Interstate 270, that means huge increases in electric bills and possibly overworked cooling systems.

“Climate change is very personal,” Wilson said. “If you’re in California, you’re worried about wildfires. We don’t often see wildfires that much here. So, when we see it on the news we tend to have a disconnect.

“What do we care about sea levels rising? Well, how do farmers get their crops out of the country? How do we trade? … And these are minor problems to people who are grappling with ‘How do I cool off my home?’”

Understanding the personal impacts of climate change also helps Mark discuss the subject with others. In conversations about climate change, having a connection with people makes them more receptive to what is viewed by some as a political issue.

Mark recalls a talk he gave about climate change at his church, and one skeptic in the group heard him out because of the relationship they had.

“It’s not evidence that is going to shift them; it’s more trust in the figures that are saying things,” Mark said. “He sat through the talk, was engaged. That sort of engagement only happens through being neighborly. I like to try to relate to an audience, share as best I can from common grounds.”

Mark, who teaches courses at Ohio State on climate change, has seen a noticeable increase in his students’ concern. He always has students take a survey before the semester begins, and one question asks how concerned about climate change students are on a scale of 1 to 5. When he first started teaching the class, the average answer was about a 3. In the last few years, that average has jumped to 5.

At Ohio State, Mark says, students have amazing opportunities to engage in research that could impact Ohio’s climate change readiness. Research at Ohio State is currently being conducted on topics ranging from how climate change influences Ohio’s grape and maple syrup production to disease transmission from crop pests. Projects are also being completed that look at various “heat islands” around campus, determining where at Ohio State is hotter or colder and how that impacts student population on campus.

“This is a massive place, and it’s amazing to tap into that depth of expertise,” Mark said. “It can be daunting, but as a student there’s a great opportunity to take advantage of that.” 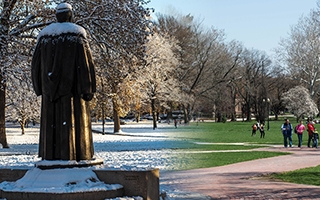