How the arts and humanities are confronting climate change 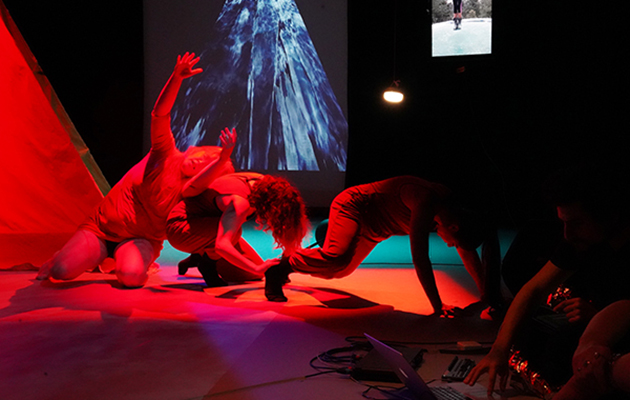 A performance of Climate Gathering at The Movement Lab at Barnard College in New York City in January 2020. Photo credit Guy Delancey.

A dancer’s performance ritual confronting the anguish and fear of a planetary emergency. A multimedia art exhibition exploring the significance of plants’ carbon sequestration during the Anthropocene period. An English professor uncovering links between storytelling and climate change. These are some of the experts within the College of Arts and Sciences applying their arts and humanities intellect to a growing global crisis.

Climate change as a discipline is no longer confined to the scientific arena.

People outside the sciences are expressing complicated feelings about climate change, attaching narrative and emotion to the science, and aesthetically amplifying environmental realities, allowing audiences a more accessible, identifiable connection to global warming.

Narrative matters,” said Jason Cervenec, education and outreach director at the Byrd Polar Climate and Research Center. “Just getting more scientists in and sharing more information isn’t actually going to work. You need trusted emissaries and compelling stories, and that’s probably going to come from the arts and the humanities.”

Through collaborative initiatives such as the Livable Futures network — a project created by faculty with support from the Global Arts + Humanities Discovery Theme — artists, scholars and activists are dissecting climate change and its impacts in bold, new ways.

There was a time when Norah Zuniga Shaw turned away from climate change. She didn’t want to deal with it and felt powerless against its ominous, overwhelming magnitude.

“I was just scared,” said Zuniga Shaw, a professor in the Department of Dance and the Advanced Computing Center for the Arts and Design (ACCAD). “I was denying it, essentially.”

Then, about five years ago, she decided to confront her climate anxieties, asking herself how she could act by applying her artistic expertise.

With her collaborators, she started creating and offering regular performance rituals, Climate Gathering, integrating audience participation, live sound and dance in a multimedia environment that includes a research tent on loan from Byrd Polar. The project seeks to empower participants, allowing them to engage with climate change and the grief, fear and anger associated with it. 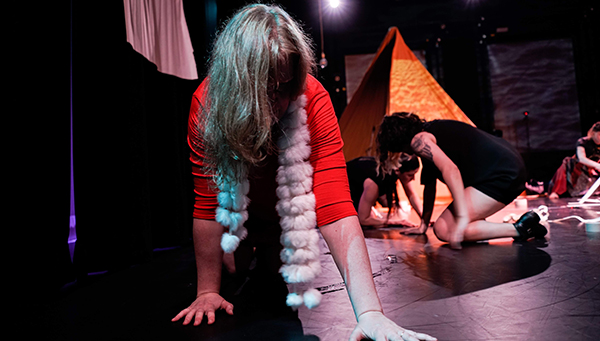 Norah Zuniga Shaw, a professor in the Department of Dance and the Advanced Computing Center for the Arts and Design, during a performance of Climate Gathering. Photo credit Heather Taylor.

“Audiences report that it helps them reflect and feel and open up to an issue that usually is just overwhelming and makes us feel disempowered," Zuniga Shaw said. "With this project, we’re turning toward the issue and helping people commune and connect with themselves and each other. They find meaningful intention and feel their way into action.”

Climate Gathering is part of a larger collaboration for Livable Futures that Zuniga Shaw co-founded with support from the Global Arts and Humanities Discovery Themes. The on-campus performances are held at ACCAD's Motion Lab. Future performances were scheduled to take place at Ohio State and within the Columbus community. Due to the COVID-19 pandemic, however, Zuniga Shaw and her team will offer online and social distancing versions.

“In 2020 we performed these climate rituals with communities in New York and Melbourne,” she said. “Now in response to COVID-19, the Climate Gatherings have become Performance Rituals for Livable Futures, making connections between pandemics and the climate emergency and helping respond to uncertainty.”

Each performance ritual is conducted for 10-20 people the artists call a “wisdom circle.” Zuniga Shaw’s haunting movements and fragmented chants are influenced by the participants — who in turn are influenced by her. This symbiotic relationship elicits a spontaneity that amplifies Climate Gathering’s relevance and catharses in a dynamic piece.

“Another thing we need in addition to (the science) is a way to confront (climate change) as a reality, and that’s where I think the arts can play a significant role,” Zuniga Shaw said. “The performance work we’re doing is bringing (climate change) to the scale of people’s bodies and lives and actually doing something together. I think that amplifies the dialogue and gets people more mobilized.”

One project Amy Youngs helped develop last fall semester focused on the micro level, allowing participants to assume the role of a carbon dioxide molecule inside a plant cell and demonstrating the importance of carbon sequestration.

It was called, “Un-becoming Carbon: Traveling in Intercellular Space.” Youngs, an associate professor in the Department of Art, oversaw the collaborative art installation in a class she co-taught with molecular genetics professor Iris Meier. The interdisciplinary course, “Aspects of Art and Technology,” is offered every year and combines art, science and the environment, giving students opportunities to tackle creative projects using scientific and artistic methods.

While Youngs co-taught the course, she was one of many collaborators who took “Un-becoming Carbon” from the seed of an idea to a fully grown reality. Everyone in the class — Youngs, Meier, 12 undergraduate students and three graduate students — contributed their unique backgrounds and expertise to put their own original stamp on a one-of-a-kind piece.

“Un-becoming Carbon” opened as the visitor entered a doorway into a leaf’s cellular space, where items imitating the leaf’s interior dangled from the ceiling and lined the floor. From there, the viewer donned a virtual reality headset to accompany a carbon particle as it’s absorbed into a plant, where photosynthesis uses it to produce energy and oxygen. 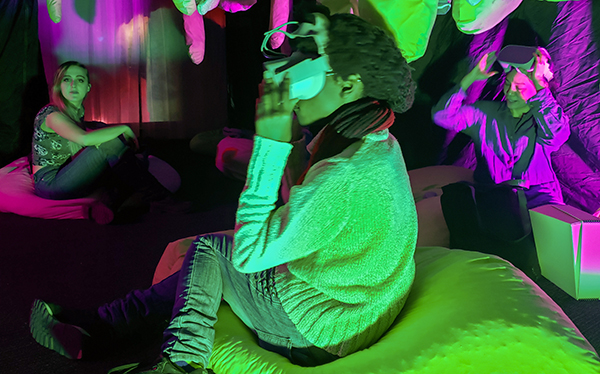 The entire experience expressed the vital role plants play on Earth and how much humans rely on them. As carbon emissions grow worldwide, that responsibility becomes increasingly important.

“We’re breathing in what the plants are breathing out,” Youngs said. “There’s this wonderful sense of connection that we don’t often think about. … The work I’m doing tries to open us up to caring about things beyond just the human world. Part of our problem with climate change and the Anthropocene (period) stem from a disrespect we have of all things nonhuman.”

For Brickman, whose mediums include installation art, sculpture and video, the goal of her work isn’t necessarily to teach. There’s no concrete lesson to take away. The aim is to create a visual experience. If that sparks a desire to learn more, all the better.

Bringing people into these spaces is really about opening up a conversation,” she said. “To have an open-ended discussion about the reality of a changing climate.”

FROM DATA TO NARRATIVE

How do data and science play roles in those conversations and storytelling? It’s a question associate professor of English Thomas Davis is exploring.

Last spring, Davis led the English course “Methods for the Study of Literature,” which examined storytelling and how our close analysis of texts relates to our understanding of the world. In this particular class, Davis and his students applied those principles and lessons to climate change.

“We have an enormous amount of data and knowledge about something like climate change and yet we still don’t act on it,” he said. “That problem isn’t just a question for the sciences. It’s a question for the humanities. Those kinds of problems underscore the need for multidisciplinary approaches.”

That issue is on the forefront of Cervenec’s mind, too. As Byrd Polar’s education and outreach director, he develops outreach programs and initiatives introducing climate science to schools and organizations throughout central Ohio. He came to Davis’ class last semester to discuss the challenges he faces when connecting storytelling to science and elaborate on why it’s important.

“Science only tells you what is likely to be or what is,” Cervenec told Davis’ students. “It doesn’t actually take the next step of a moral, ethical decision of what you should do about it, and that’s a challenge that a lot of scientists really are worried about.”

A screenshot from a Virtual Ice Tour of Ohio State researchers' expedition to a glacier in Peru.

Cervenec has overseen and helped guide many of Byrd Polar’s endeavors attaching narrative to science. A visual communication design student intern uses data to create compelling, informative graphs in ways audiences can understand. The center has developed an interactive virtual exploration tool, the Virtual Ice Explorer, that helps visualize researchers’ expeditions to locations around the globe. Its web application, the Fluid Earth Viewer, allows viewers to visualize Earth’s current and past conditions — from wind speed to temperature to precipitation.

These are just some examples of Byrd Polar making science more accessible for a broader community. The opportunities to distill the data in ways more audiences can understand are growing, and Byrd Polar is always thinking of how to leverage the power of narrative to make those connections.

Some of the foremost climate experts call the College of Arts and Sciences their home. From creating more robust models to better predict climate change to studying how the crisis impacts Ohio, researchers are pushing the boundaries of science to answer a growing array of questions.

But artists, creators and storytellers are imperative to help complete the picture and shift from knowledge to action.

Said Davis: “We’re going to need to think very carefully about the kind of language we use, … what kind of concepts we have to invent (and deploy) and what kind of narratives we’re going to tell to get people to collectively think about how to create a better, more livable world.” 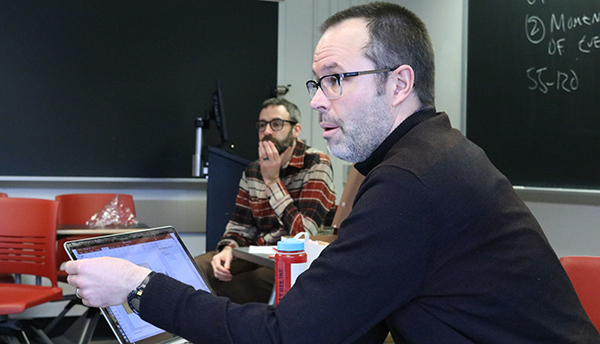 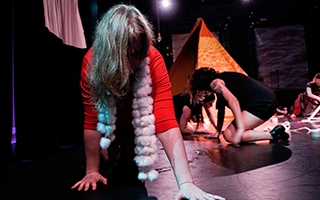