On the front lines of COVID-19 vaccine research 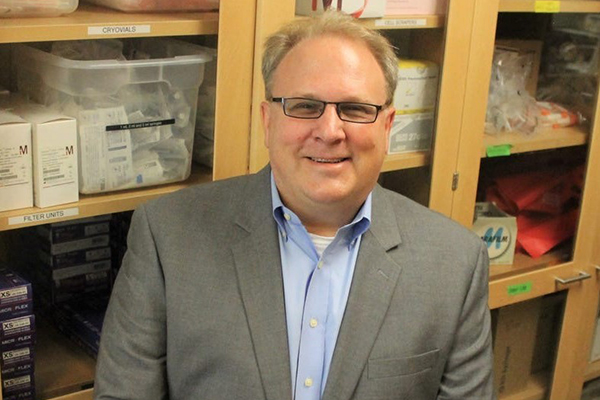 Thirty years after graduating from Ohio State with a degree in chemistry, Raymond Goodrich is leading a team that is fighting the coronavirus.

As executive director of the Infectious Disease Research Center (IDRC) at Colorado State University, Goodrich oversees a giant facility that is working feverishly to develop a vaccine for the pandemic. A facility that specializes in joining scientists with private sector corporations, the IDRC houses research facilities, biocontainment labs and a not-for-profit manufacturing arm. This allows the IDRC to take part in every step of vaccine development, which it is currently doing for COVID-19.

Before his role at the IDRC, Goodrich developed products to prevent disease transmission during blood transfusions that have been used nationwide since the early 2000s. Now, some of those products are fueling the IDRC’s race against the coronavirus.

“I always had this idea of being a professor at a university working on infectious diseases, and I got that opportunity here,” Goodrich said. “It’s been a wonderful experience to be able to work with colleagues, students and the staff (at Colorado State) to be able to apply our knowledge in the fight against human and animal disease, and to apply that knowledge on behalf of the public.”

Despite living two time zones away, Goodrich remains loyal to Ohio State as an adjunct professor in the Department of Chemistry and Biochemistry, and he still finds time once a year to return for a Buckeye football game. He and his wife,  Laura, have also been generous donors to the university and  established a scholarship for chemistry and biochemistry undergraduates in 2011.

Below is an interview with Goodrich on his current work to fight the coronavirus and a reflection back on his time at Ohio State. The interview, conducted in March, has been condensed and edited for clarity.

How has your research at the IDRC shifted toward fighting COVID-19?
We had already been doing work looking at the ability to use [blood transfusion sanitization technology] for treating blood products to see if we could use it to generate vaccines. When this new disease came along, it was a natural transition to say, ‘Could we use this process to develop a vaccine candidate for COVID-19?’ We started doing that work toward the end of February, and we’ve been working on that ever since. We’re now starting animal models that will allow us to test whether or not the vaccine was effective at generating an immune response that gives protection against subsequent challenge with the live virus. Because we had certain facilities and capabilities in place, it was possible to focus those efforts on addressing what has become an emerging, international threat to our communities.

How much has your pace of work increased since COVID-19 emerged?
It has obviously increased dramatically. COVID-19 is the problem of the day, the year, and it is certainly one that deserves the majority of the focus of our efforts. We’ve refocused some of our other efforts onto projects related to developing new ways for surface decontamination, developing diagnostics and more-rapid detection of disease or new ways to do the testing, so we can increase feedback to the community and decrease backlog.

What is your lab’s level of cooperation with other scientists?
We’re working quite a bit with folks at the National Institutes of Allergy and Infectious Diseases (NIAID) and with people from private-sector companies who have stepped up to donate equipment and supplies. We have a lot of international cooperation as well. A lot of what we’ve learned and have been able to apply came because of colleagues that we’ve been in touch with in Australia who were some of the first to be able to isolate the virus and grow it. There’s a lot of sharing of knowledge, and it shows that people are uniting in the scientific community as a whole to try to pull and marshal resources as well to solve this problem.

What is the potential timeline for a vaccine?
I don’t think I would say anything different than what [NIAID Director] Dr. Anthony Fauci has said publicly, which is timeframes of 12-18 months. The reality is that that’s already a really accelerated pace. If we weren’t in the midst of a crisis, we probably would take much longer than that. It takes a lot of work to bring products like this forward and make sure they’re safe and effective. I wish it could be faster; I’m sure everybody does. But I’m convinced everybody is doing everything they can to make it as fast as possible.

What inspired you to get into this field?
I guess from the time I was very young, I always had an interest in medical research and being able to apply my knowledge to dealing with disease. When I was in high school, I read a book called Microbe Hunters by Paul de Kruif, and it tells the story of the early researchers in infectious disease, like Louis Pasteur. I was inspired by reading their stories and by seeing the kind of work that they did, and I decided that’s what I wanted to do with my career.

What were your early years like at Ohio State?
I started out as an undergrad in microbiology, but I took some courses in chemistry early on and was really inspired by some of the teachers that I had: Drs. Harold Schechter, Leo Paquette and someone who became my mentor, Dr. Matthew Platz. I remember having a conversation with Dr. Platz, and he said, ‘You could do research in biology, but from a foundation of understanding chemistry.’ And I thought to myself, ‘Well, Louis Pasteur was actually trained as a chemist.’ So, I ended up majoring in chemistry, graduating, went to Cal Tech and got my PhD in chemistry. But my view was always not just making molecules, but seeing how those molecules could treat disease and translated into products that could help people.

Is there something about your time at Ohio State that set you up for what you’re doing now?
When I entered, I came in under what was called at that time the Freshman Scholar Program, which really afforded me the opportunity to do research as an undergraduate. That experience really transformed my life in many ways. It allowed me to do the classroom learning, yes, but also work in the Platz Laboratory at the time on a project. I was able to interact with graduate students and postdocs. I not only did a senior thesis, but I co-authored a paper that got published in the Journal of the American Chemical Society. It really helped me launch my career and inspired me to do the work I ultimately ended up doing.

Is that part of why you and your wife started a scholarship at Ohio State?
My wife, Laura, and I felt so strongly that we established a scholarship for chemistry, biochemistry and chemical engineering undergraduate students who have a financial need because I was one of those students. So, we were very proud to establish the Raymond and Laura Goodrich Scholarship. We also were inspired to help with the creation of the CBEC building and provided some funding support in honor of Matthew Platz to help build out the new CBEC building. It was a very formative time in my life, and Ohio State really afforded me the opportunity to come out of my shell. It was such a large place that you could be yourself in a group. You could go out and find opportunities and pursue those, but you also felt that you were part of something much bigger. That allowed me the time I needed to come out of my shell, and it gave me all these myriad opportunities of education and people and connection that were so important to me in becoming the person I became as a scientist, professional and human being. 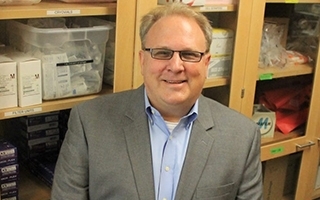