Planting seeds for a more diverse, equitable future in STEM 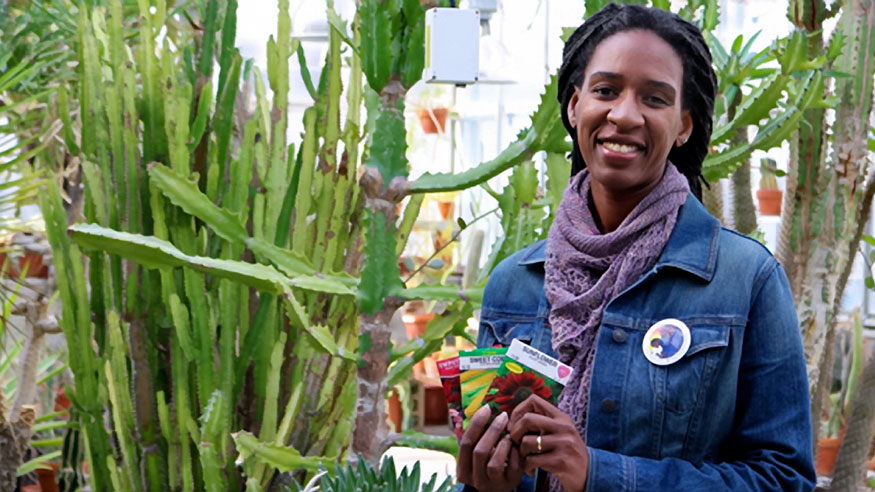 Maria Miriti visiting Ohio Wesleyan University in 2018 to give a talk on management of plant populations and attracting urban youth to ecology. Photo courtesy of Ohio Wesleyan.

For much of Maria Miriti’s career, she has been an “only.”

So when the Black Lives Matter movement drew renewed attention this summer to racial inequity in the United States, she was motivated to think more deeply about how that applied to her own field.

“It made me recognize a pattern in that diversity initiatives frequently have single-axis categorical targets,” Miriti said. “They will promote inclusion of women or they'll promote inclusion of Black Indigenous people of color (BIPOC) or LGBTQ people, (but) these categories are broad within themselves, and so when you just focus on the category, it's not really as inclusive as it seems.”

Such limitations in diversity, equity and inclusion (DEI) efforts in higher education, which are often more prevalent within STEM fields, have propelled Miriti to advocate for change. Building off years of community engagement and outreach, she now also champions deeper and more comprehensive efforts to recognize and support Black women in STEM.

We set the bar for Black women going into STEM so ridiculously high," Miriti said. "There are a lot of ways to be a successful scientist without being a superhero scientist."

Miriti said despite increasing awareness of climate change, environmental justice and recognition of the connections between human life and the natural world, ecology is still an invisible discipline for many people, with the exception of the white middle class demographic largely populating the major.

Instead, students among underrepresented groups — first-generation college students, people from rural areas or people who are poor — gravitate toward fields that represent established measures of success.

“Becoming a doctor, a lawyer, getting a business or engineering degree, these are visible to people, and so that's where they go,” Miriti said. “I think it's important to raise the visibility of ecology and environmental biology to a broader group of people so that it can be on their radar in terms of what they might want to do when they grow up.”

Miriti also noted the need for realistic role models for Black women. She said their scientific contributions are often underrecognized, meaning many times the only visible scientists are those who are the most iconic in their field.

“People can probably tell you who Mae Jemison is, but most doctors are not going to be accomplished astronauts like Mae,” Miriti said. “Sometimes what that means is we set the bar for Black women going into STEM so ridiculously high. … There are a lot of ways to be a successful scientist without being a superhero scientist.”

To introduce more students to ecology, Miriti has been a leader in developing education outreach efforts through community garden projects, programs for local minority high school students, and recruitment and mentoring of undergraduate and graduate students. For her efforts in this area, Miriti received the Commitment to Human Diversity in Ecology Award from the Ecological Society of America (ESA) in 2019.

“People can't pursue what they don't know,” Miriti said. “Even just showing up and saying, ‘I am a plant ecologist’ all of a sudden changes the landscape for some people … because there's a different image being presented.”

Visibility and recruitment are only one component of effectively increasing diversity within EEOB and other STEM fields. Retention is an equally important piece of DEI success, which Miriti knows well.

Her undergraduate education had left her burnt out; being one of the only Black students was an isolating experience. When, after a few years of working, she was ready to go back and get a PhD, she made diversity and inclusion a central factor in choosing a university.

“I made sure that I chose an institution by its demographic makeup and not necessarily by the reputation of the program because I learned enough to know that that amount of isolation, if I was in graduate school, would probably work against me and it would be harder to be effective in my own learning,” Miriti said. 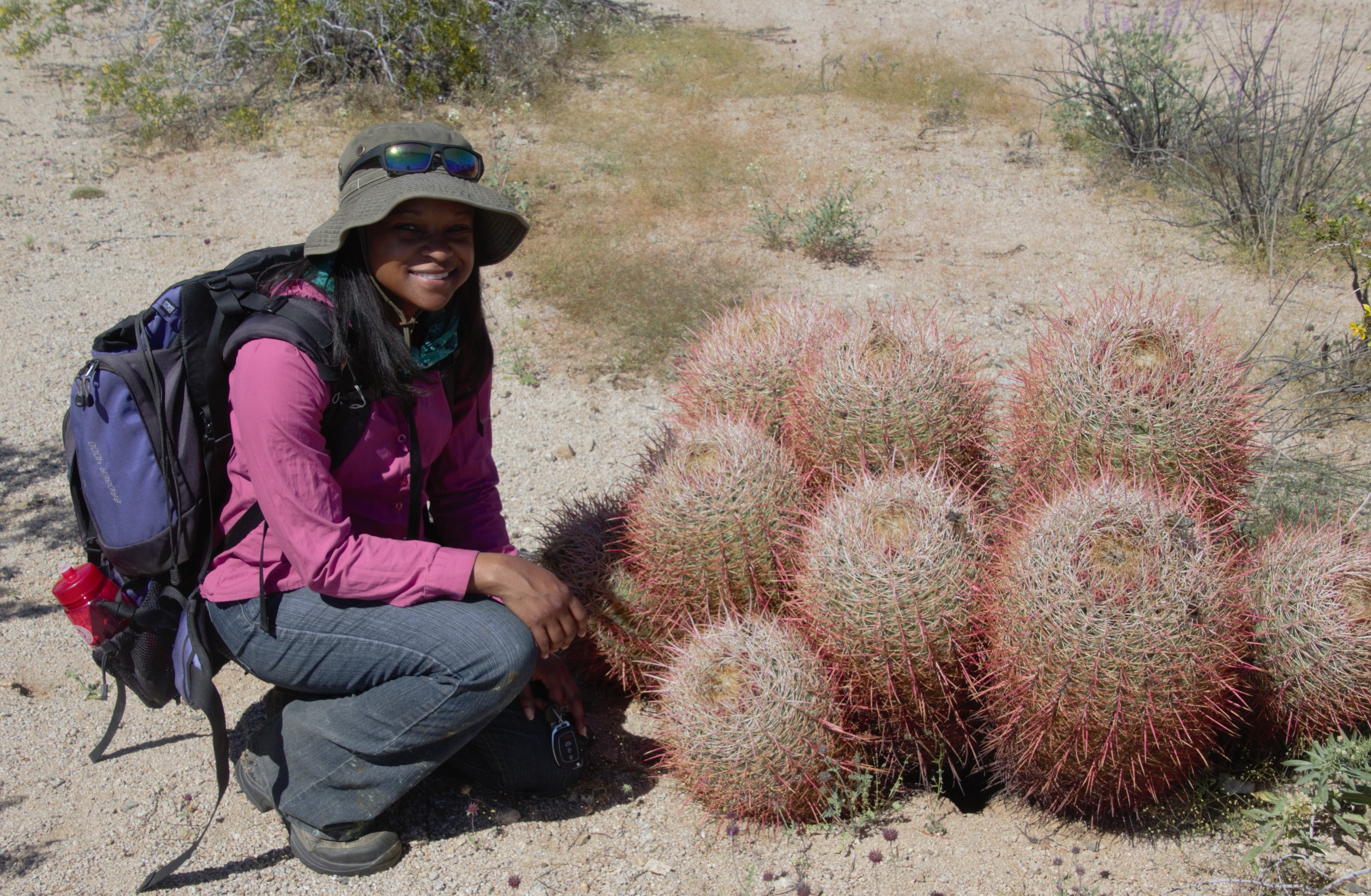 Natasha Woods, now an assistant professor at Moravian College, is an alumna of Miriti's lab through which she conducted field work researching desert plants, pictured above. Miriti's lab is now researching equity and inclusion in ecology and environmental sciences and how environmental factors impact desert perennials.

Recognizing the importance of having diverse faculty and students within STEM, Miriti has penned two articles this year in Nature Ecology and Evolution and BioScience with suggestions for how the academic and scientific STEM community can better uplift Black women.

“Being the only Black woman can be exhausting,” Miriti said. “For both students and faculty, people get discouraged and burned out and they move into a different area where they might not experience as much marginalization or isolation from being on the vanguard of representation in STEM.”

Miriti recommends three things. The first is intersectionality, which means DEI measurements that more intentionally consider a person’s multidimensional identity — like being Black and a woman.

Second is increased institutional support. The first part of this process is confronting the biases within institutional systems. For example, reward systems tend to undervalue outreach and service, which Black women are often more heavily involved with. Then, institutions must make accommodations or changes to mitigate those disadvantages.

The third is cultural change. This “requires taking the time to understand the cultural biases that live within disciplinary and institutional practices,” Miriti said.

“I would be remiss if I didn't acknowledge some of my colleagues in my department who have been supportive of me as I've been moving deeper than I ever thought I would in outreach initiatives and writing papers that expose the inequities that live in my discipline in ecology and evolution,” she said.

Placing diverse faculty in leadership positions and hiring diverse faculty members in clusters are two strategies that can help create a more robust environment of support for faculty and students. Miriti says with so much energy and hope being directed toward social equity, now is the moment to actually implement such practices. That potential, though, adds pressure, since people have been speaking to justice and equity for a long time but little has changed within STEM.

“For some of us, like for me this summer, it has meant throwing a lot more energy toward equity issues and trying to really make sure I do what I can to move the bar forward in a meaningful way,” Miriti said. 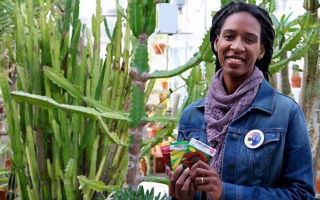