Teaching the "hard history" of slavery and racism in America

Earlier this year for Martin Luther King Jr. Day, Hasan Kwame Jeffries, associate professor in the Department of History, found himself in front of his daughter’s preschool class. The task at hand was to teach 4- and 5-year-old girls about the civil rights movement in a way they could understand — to move beyond their ideas that King was an actual king who was slain by a dragon.

“At first I said no,” Jeffries laughed, thinking about when his daughter’s teacher first approached him with the request. “4-year-olds make me nervous.”

But he eventually came around to the idea, and he decided to open the conversation by talking about aspects of King’s life that directly related to the students’ own experiences. He discussed what King could and couldn’t do growing up in segregated Georgia, and he talked about the Birmingham Children’s Crusade in 1963 in which thousands of children, including those the same age as the students he was presenting to, marched and went to jail with King to end segregation. 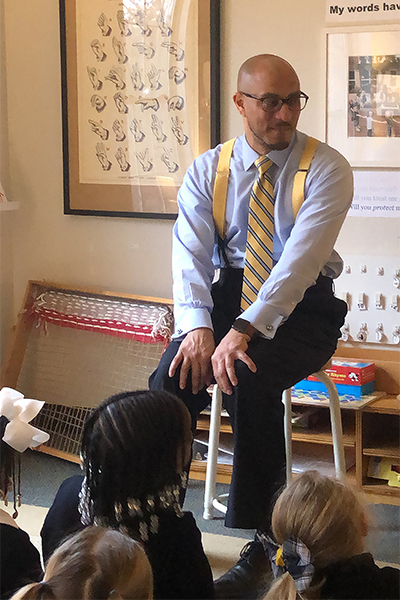 Hasan Jeffries, pictured to the right, presents to his daughter's preschool class for MLK Day.

Finding ways to teach students of all ages what Jeffries calls “hard history” is why he became a professor. Now, he uses his community engagement, his work at Ohio State, his efforts to support fellow educators and the conversations he has with his daughters to encourage a more complicated understanding of American history.

Jeffries’ interest in American and African American history started back when he was in high school. Originally from Brooklyn, he grew up in the 80s and remembers taking the subway through the segregated neighborhoods of New York.

“You're crisscrossing the city, and you're seeing extreme wealth, extreme poverty and rigid segregation, and this is the middle of the crack epidemic and the start of mass incarceration and all that sort of stuff,” Jeffries said.

His education wasn’t providing the insights he was looking for to understand the disconnect between what he was learning in the classroom and what he was seeing and experiencing out in the world.

“When I went to college, I went in as a history major knowing I wanted to get a PhD because I wanted to teach, but I also had this really insatiable thirst for figuring this thing out,” he said.

History education has largely been stagnant since the 1980s, Jeffries said. By that point in time, schools were no longer ignoring slavery and they mentioned civil rights, but there were no deep, critical discussions about race in America. He said that fundamentally has not changed in recent decades.

“We are usually given the Disney version of history, which in short is nostalgia,” Jeffries said. “It's stories about the past that make us feel good about ourselves in the present, and so we actually run from what I call hard history: those troubling aspects of the past that make us uncomfortable. That's what we're trying to break through.”

Jeffries advocates for educational scaffolding, a strategy already employed in math and science. The idea is to introduce basic concepts at a young age and build on that foundation as students mature, so when they are eventually asked to grapple with contradictory situations — say, recognizing that the Founding Fathers both advocated for freedom and owned slaves — students have the educational and analytical tools needed to understand such facts.

We are usually given the Disney version of history, which in short is nostalgia,” Jeffries said. “It's stories about the past that make us feel good about ourselves in the present, and so we actually run from what I call hard history: those troubling aspects of the past that make us uncomfortable. That's what we're trying to break through.”

Talking about African American history from a young age is important, in part, because children can identify race as early as six months, and it can help them understand the world they live in, Jeffries said. Additionally, he says children are often more comfortable discussing and learning about “difficult” topics than adults, who can be unsure of how to approach those issues.

“We as adults project our discomfort onto those more difficult topics, and we think we're doing children a favor or protecting them, but all we’re doing is creating confusion,” Jeffries said.

To help history teachers teach “hard history,” Jeffries is working with the Southern Poverty Law Center to develop a framework and supplemental resources on slavery and civil rights that K-12 educators can incorporate into their lesson plans. 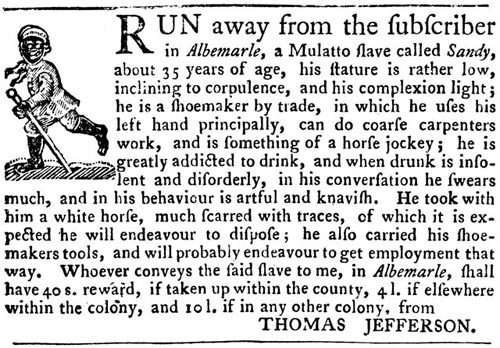 A focus of the upcoming K-12 Institute on Teaching Difficult Subjects will be on how to cover American slavery remotely, using resources such as Cornell University's Freedom On The Move online database of fugitive slave advertisements.

He said teaching such subjects accurately and effectively means providing a nuanced picture of African American history, something Jeffries has to remind himself of at home when talking with his own daughters.

Jeffries is also leading a new initiative, the K-12 Institute on Teaching Difficult Subjects, through the Global Arts + Humanities Discovery Theme. The initiative will bring together 20 central Ohio teachers for a year-long exploration of multidisciplinary approaches to understanding and teaching difficult subjects in America’s past and present. This year is focusing on American slavery.

Sometimes, Jeffries said the best thing teachers can do is provide the information and context before allowing children to process the information themselves. When done well, the connections and ideas students take away from this kind of education can be profound.

A few days after Jeffries spoke to his daughter’s class, his 4-year-old was postponing bedtime by asking her father more questions about King. He told her about the four girls who had died in the 16th Street Baptist Church bombing, and how even though children were scared, they still came out to support King. Then, right when Jeffries thought she had fallen asleep, she had something to say: “Daddy, I think he was trying to say that America was damaged.”

That’s something Jeffries has been trying to say for 25 years.