How do you get to Carnegie Hall?

Performing at Carnegie Hall is a dream rarely realized.

Thanks to the national reputation of School of Music faculty member Hilary Apfelstadt, The Ohio State University Chorale, four high school choirs, and a college choir were invited to perform in a concert at Carnegie Hall’s Stern Auditorium on Saturday, April 17.

“For musicians, Carnegie Hall is one of the most prestigious venues in the world,” said Chorale member Michael Goede. “It’s humbling to realize that in a small way, I’m now woven into the fabric of its history.”

Tim Poorman had lunch with his New York cousin before the concert. Tim’s cousin told him he was about to perform on the same stage as every major classical musician for the past 100 years. “Until that moment, I didn’t realize the significance of what Dr. Apfelstadt has accomplished and the incredible opportunity she’s given us,” he said.

Apfelstadt, director of choral studies and associate director of the School of Music, is a frequent guest conductor and adjudicator of all-state and honors choruses. She has conducted in Europe and Cuba. In 2009, she conducted the Mormon Tabernacle Choir in a live broadcast of “Music and the Spoken Word” from Temple Square in Salt Lake City. She is also immediate past-president of the American Choral Directors Association.

Under her direction since 1993, Chorale has collaborated with the Columbus Symphony and ProMusica Chamber Orchestra and sung at divisional and national choral conferences. In 2008, members of Chorale participated in the Lucerne International Choral Festival in Switzerland. Chorale, the select mixed-voice ensemble of juniors, seniors, and graduate student singers, was founded by professor emeritus Maurice Casey in 1967.

Chorale and its combined choirs of 275 singers performed Brahms’ Nänie, a lament based on a poem by Schiller, and Festival Jubilate by American composer Amy Beach. The work premiered in 1892 when Beach was only 24.  It was the first piece commissioned by a woman in the U.S.; both pieces were accompanied by an orchestra.

“On the night of our performance, hearing that first sound of our combined choirs filling such a magnificent hall is a moment I’ll never forget,” said Brett Czekaj. 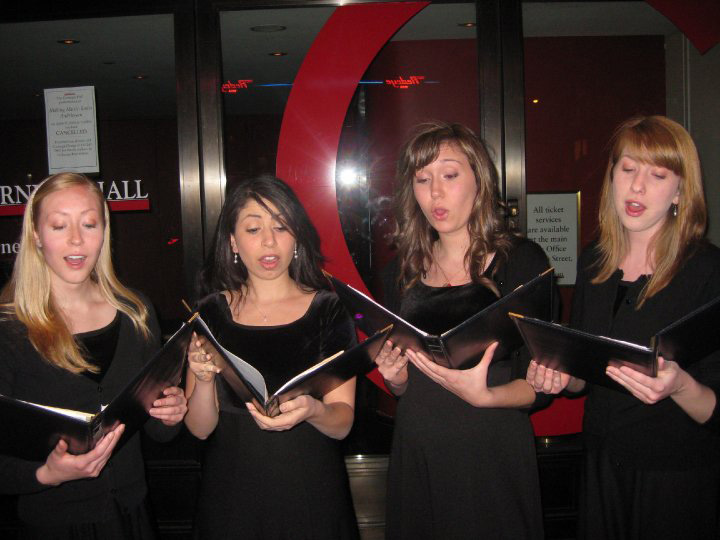 Students praise Apfelstadt for her musicianship, her calming presence, her energy, and her ability to challenge singers to bring out their best.

“It was a wonderful concert. I was so proud of our students and all of the singers,” said Apfelstadt.

She has her own memories of singing at Carnegie Hall with the Robert Shaw Festival Singers. “It’s a unique experience and creates lasting memories.”