Determined To Make A Difference

When Helina Selemon was in the first grade, she told her school counselor that when she grew up, she wanted to be a doctor. By the time she turned 12, Selemon narrowed her specialty to infectious diseases. She would become a doctor and find a cure for tuberculosis (TB).

"I saw so many people, including some of my own family members, stricken with tuberculosis."

Selemon, a first generation student from Gahanna, Ohio majoring in microbiology, has a very strong tie to Ethiopia.

“My parents came to this country as refugees from Ethiopia,” said Selemon. “I grew up knowing that education was always important to them—not in the ‘if you don’t get an A, you’re a failure’ way, but they set the bar pretty high. They demonstrated hard work and sacrifice for a dream and for a better life.”

When Selemon was 12 years old, she visited Ethiopia with her parents and siblings. What she witnessed on that trip changed her life.

“I saw so many people, including some of my own Ethiopian family members, stricken with tuberculosis,” explained Selemon. “Many people died because they either couldn’t afford treatment, or the medication simply wasn’t available.”

By the time Selemon returned to the United States she too had been exposed to TB and required medical care. That she was able to access the health care she needed so readily, when others could not, troubled her. “I wanted to click my heels and be a doctor, fly off to Ethiopia, and cure the world,” said Selemon.

Selemon is in her fourth year at Ohio State majoring in microbiology. She is carrying a full load of classes while also working part time as a student research assistant at the Davis Heart Lung Institute. She is also a Resident Advisor in Jones Tower, a co-ed residence hall for upper-level students.

“It takes a tremendous amount of time but it’s worth every minute,” she said. “I get to know a lot of students, make new friends, and try to make a positive mark on their college experiences.”

As a freshman, Selemon was selected to participate in Ohio State’s Program for Advising in Scholarship & Service (PASS), a first-year learning community for students with an interest in the academic, cultural, and professional aspects of diversity.

PASS afforded Selemon the opportunity to network with 3rd and 4th-year students, access leadership training, and work directly with professors on research and scholarly projects.

Selemon volunteered the next several years as a mentor in the PASS Peer Leadership Program. In her role as a Peer Leader, Selemon provided one-on-one mentoring to underrepresented minority students, many of whom were also first generation students.

Selemon summed up her experience as a mentor. “As a PASS Peer Leader, I had the opportunity to provide freshmen with the tools and advice that I was given so that they too could have a rewarding undergraduate experience.”

Selemon’s dreams don’t center on money or fame. When asked about future plans, she smiled just a bit and said softly, “I believe everyone has the power to contribute something to the world.”

To the countless number of students whose lives Selemon has touched over the past four years as a mentor, friend, and advisor—she already has. 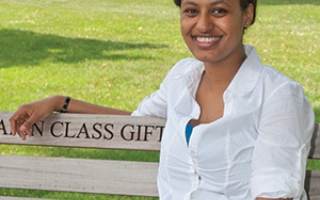