Math + Biology = The Cure for What Ails You

For those of us whose eyes glaze over at the mere mention of a word like “algorithm,” it is hard to believe how excited people can become over mathematics. Spend an hour with Marty Golubitsky, director of Ohio State’s Mathematical Biosciences Institute (MBI), and one begins to get it.

“Our MBI scholars tackle problems and make discoveries that push the envelope for what can be done to make real progress in the biological and biomedical sciences,” said Golubitsky. They have discovered new methods for helping wounds heal using calculus; tracked the worldwide spread of viruses using statistics; and gained a new understanding of the body’s immune response, using mathematical models.

In 2002, the National Science Foundation established MBI at Ohio State to maximize opportunities for the mathematical sciences to accelerate progress in the biosciences. MBI is one of a handful of math institutes around the country that must compete regularly for continued funding. As a result of the 2010 competition, MBI received a five-year, $16.2 million grant.

The news makes Golubitsky beam, “We are delighted that our peers in the mathematical and biosciences gave MBI the green light to explore the interface between these two exciting areas. The continuing quantification of biology and medicine requires new math, and MBI can now foster programs that show how both disciplines benefit from this interaction.”

MBI spends its money well. It supports the work of 12 or more postdoctoral fellows annually, along with a number of long-term visiting scholars. Their collaborations with Ohio State researchers produce work published in the world’s top scientific journals, including Science, Nature, and the Proceedings of the National Academy of Sciences.

MBI provides a wealth of other opportunities for researchers to learn, explore, and develop partnerships. Its annual “Emphasis Year” programs are one-week, theme-focused workshops held several times per year at the MBI. These examine various key issues, such as how climate change affects marine ecology or the role of randomness in public health models.

Additionally, MBI runs a summer program based on tutorials and team projects led by postdoctoral fellows, along with occasional “Current Topic” workshops that introduce mathematical scientists to new opportunities for research.

If by now you’re not convinced that mathematics is both relevant and fun, attend one of MBI’s free public lectures that delve into mesmerizing topics like, “Math at top speed: exploring and breaking myths in the drag racing folklore,” “Real democracy: how honeybees choose a home,” and “Heart attacks can give you mathematics.”

Visit the Mathematical Biosciences Institute for more information on programs, lectures, and workshops. 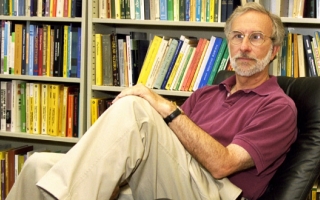