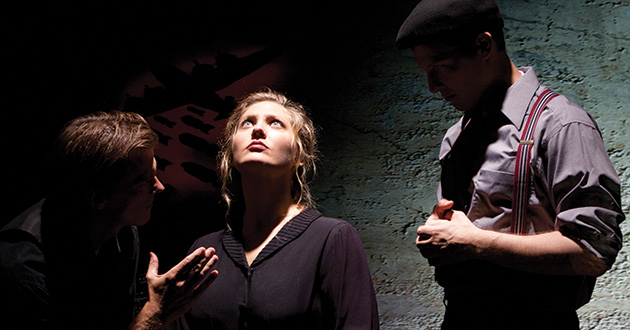 A three-part interdisciplinary endeavor at Ohio State took a close look at secret agents, camouflage, deception and disguise during World War II. The Camouflage Project, a joint venture with the Department of Theatre and the Advanced Computing Center for the Arts and Design (ACCAD), is giving new meaning to the expression “theater of war.”

On one level, the project theatricalizes the history of military camouflage, particularly the Special Operations Executive in France, and the role played by British women secret agents, according to Lesley Ferris, co-director of the performance with Jeanine Thompson, both from the Department of Theatre. It also revealed the artistic side of these activities. A wide variety of artists, such as scenic, costume, and makeup designers, along with vaudeville magicians, were employed to use their theatrical skills to deceive the enemy.
The collaborative project was conceived by Ferris and Theatre’s Mary Tarantino and was funded by the Mershon Center for International Security Studies and the College of Arts and Sciences. It included, a new, multi-media performance work combining digital animations, mapping, and video projections with live performances in May. A companion exhibition was created parallel to the performance space, and featured historical background on the art of camouflage, and examples of military equipment, disguises, and gadgets. On May 19-21, an international symposium focused on the multiple artistic and instrumental meanings of camouflage, and attracted participants from as far away as London, New York, Glasgow, and Leeds. Plans are underway to tour the project to London in 2012. 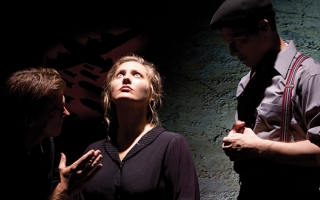