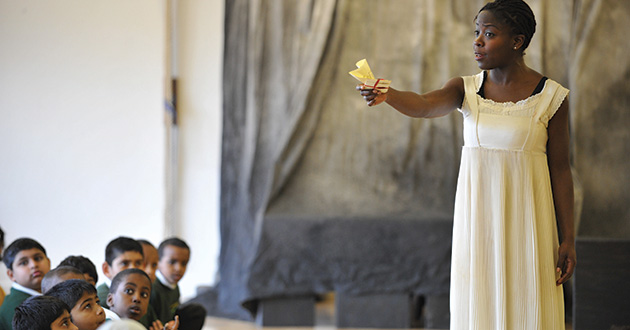 Ohio State is bringing the UK’s renowned Royal Shakespeare Company (RSC) and its Young People’s Shakespeare production of Hamlet to Columbus in June for six performances. The performances will be the North American premiere of the 70-minute production, created especially for young people and families.

The Arts Initiative at Ohio State presents the performances with support from the Department of Theatre and CATCO/Phoenix.

Bringing the Royal Shakespeare Company’s production of Hamlet to Columbus represents a remarkable opportunity for our community, said President E. Gordon Gee. “It builds on the university’s deep and creative collaboration with an unparalleled theatre company and underscores the University’s central role in sustaining and growing artistic expression.”

Hamlet, directed by Tarell Alvin McCraney, RSC/Warwick International Playwright in Residence, will be performed twice daily on June 25, 26, and 27 at the Columbus Performing Arts Center—show times are 3 and 7 p.m. on June 25; 1 and 5 p.m. on June 26; and 3 and 7 p.m. on June 27. The earlier shows each day will be followed by a 45-minute workshop; later shows will conclude with a Q & A session. Performances are free but ticketed and will be available in June by calling the Ohio State Theatre box office at (614) 292-2295.

As a related event, central Ohio author Lisa Klein will be reading from her book, Ophelia, which is told from the perspective of Hamlet’s Ophelia.

Support the Stand Up for Shakespeare America program at the core of the partnership of The Ohio State University and Royal Shakespeare Company, as well as arts outreach at Ohio State.

Stand Up for Shakespeare America and Arts Outreach (Fund Number: 313492) 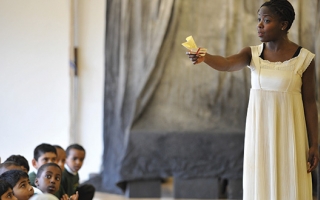