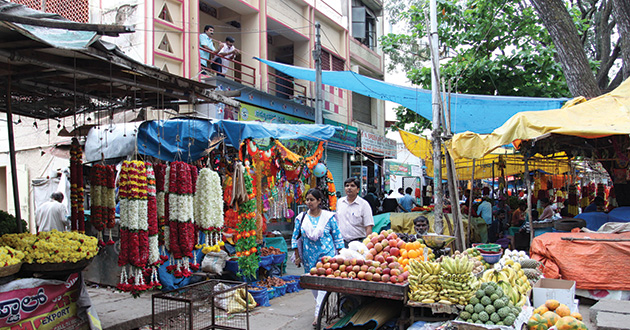 "THE STREET MARKET IN BANGALORE IS AN INCREDIBLE MASS OF HUMANITY, WITH VENDORS AND CARTS LOADED WITH EVERYTHING YOU CAN IMAGINE—COLORFUL SILK SCARVES AND SARIS, SUGAR CANE, VEGETABLES, JEWELRY, FLOWERS, MEATS, AND LOTS OF SEAFOOD."

India was chosen by DreamWorks for a reason. “There’s an incredible amount of talent in India, and this particular area has exploded in the past decade with all sorts of technology, internet companies and a lot of ex-pats,” Bain said. “And with the rich tradition of Bollywood movies, India has a very up-and-coming movie industry.”

Bain earned his master of fine arts (MFA) from Ohio State in 2008 in the Department of Design’s digital animation and interactive media program. He studied at Ohio State’s Advanced Computing Center for the Arts and Design (ACCAD) and upon graduation was immediately hired by DreamWorks Animation.

Last fall, Bain and his wife Tracy left for India, where he joined the Final Layout Department at DreamWorks.

“I was there to train and support the staff,” Bain said. “In animated films, final layout comes right after rough layout is finished. It’s our job to support the other departments down the line, including camera moves, stereography (3D animation), set dressing (adding sets like buildings, trees and rocks), and the animation and lighting departments.” 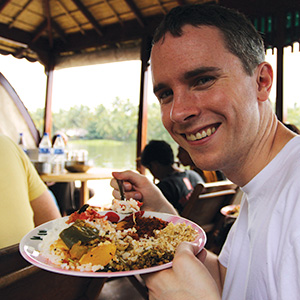 The Bains returned to California in late December, and Matt is now at work on the film Madagascar 3, scheduled to be released in 2012. He is not the only Buckeye at the studio; Bain regularly runs into other Ohio State alumni in the hallways. “ACCAD does a great job of giving students a solid foundation for all aspects of the animation pipeline,” he said. “It also let me explore my own interests – animation and music visualization. That’s what got DreamWorks Animation interested in me; I was actually hired about four or five months before I graduated!”

On weekends, Matt and Tracy explored Bangalore and its bustling outdoor markets, visited nearby villages, and even went on safari. “It’s definitely worth seeing how a different part of the world lives,” he said. “You can see pictures of a place, but nothing  compares to being there, seeing it, hearing it, smelling it, tasting it. . . even if you get violently ill from eating something from a street vendor that you shouldn’t have.” 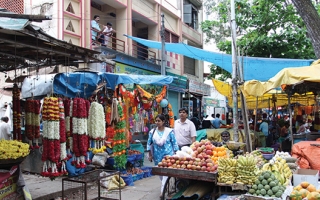