“I thought I was going to be a lawyer,” said Shanda in a recent interview.

Shanda grew up in Perry, Iowa. His uncle was an attorney and television shows like Matlock and Perry Mason piqued Shanda’s interest in the law. His career path changed in high school, when he was offered the chance to design and build the stage props for a play his freshman year.

As a senior in high school, he made his last appearance as an onstage performer, that of a talking fireplace, and he has been working behind the scenes ever since. He was hooked and theatre (design and production) became his passion.

Shanda went on to earn a BA in speech/theatre and political science from Iowa State University and an MFA in theatre technology from the University of Wisconsin-Madison.

Shanda served as the resident technical director in the Department of Theatre as well as teaching courses in drafting, technical direction, sound, theatre technology, properties, and metals. He co-authored Drafting for the Theatre, a theatre technology textbook in use by virtually all major theatre programs in the country and is a long-time contributor to Theatre Design and Technology magazine.

When he assumed chair of the Department of Theatre, Shanda exchanged the role of a daily, hands-on decision-maker for that of a long-range planner and visionary, which suited him just fine.

“There is always more than one answer to a question,” explained Shanda. I am amazed at the level of creative and analytical thinking that results when you look at a problem from multiple ‘what if’ perspectives.

As divisional dean of arts and humanities, Shanda will be juggling the interests and demands of over 6,000 students, 500+ faculty, and a large staff in 21 departments.

“I am an advocate for the arts and humanities,” Shanda stated. “My greatest challenge is to enable and inspire excellence in our faculty, staff, and students and identify those connections across departments and colleges that will redefine Ohio State as a national and international leader for innovative research and teaching.” 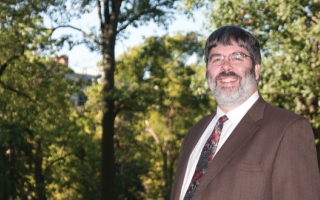