'Miss Alex' Shakes It Out

On a rainy, early spring day in central Ohio, Alex Powers, a fourth-year student in the Department of Dance, arrives in the ground-floor classroom for kids with orthopedic impairments at Indianola Informal K-8, just north of campus. Moments later a parade of children enters, most in wheelchairs or with walkers, some assisted by an aide.

As soon as they spy Alex, their faces brighten with big smiles. With lots of chatter and giggling, and more than a few hugs, they get started on another Tuesday with Miss Alex.

"OUR UNDERGRADUATE STUDENTS ARE ABLE TO FOCUS COURSES AND A FINAL PROJECT AROUND THEIR OWN INTERESTS. THIS IS AN EXAMPLE OF ONE OF THE MANY EXTRAORDINARY, CREATIVE APPLICATIONS OF DANCE WE SEE FROM OUR STUDENTS." {Susan Petry, chair of the Department of Dance}

For her senior project, Powers, a dance major with a physical therapy emphasis, is bringing dance to the class one day a week. Most of the children involved have cerebral palsy, and are in the 6th grade.

“I’m really interested in how dance can relate to their physical movement,” Powers said. “I want to help them move as much as they can, and have fun too. They really get excited about it, although some of them think I’m a little cuckoo!”

Powers went into the class thinking she’d have them explore more serious musical styles and movement. But she quickly realized that she would have to use something that is current and really speaks to the children.

“They absolutely love Justin Bieber, so we are all working together to choreograph a dance to his song,  Baby,” she said.

As soon as the music cues, she stands at the front of the class as she shouts out the next part of the dance — “Shake it out! Make a heart! Give yourself a hug! Rock the baby!” The happy students sing and bop along to the beat of the song, stretching their arms in the air with movements in synch with Powers and with one another.

After running through the choreography a few times, Powers, the students, and even the aides, join in for some rather noisy and definitely upbeat freestyle dancing to a few Michael Jackson and Beyoncé tunes.

“Everyone pitches in to choreograph the dance,” she said. “It’s great to watch them get excited about something maybe they’ve never done before. Their range of motion has improved a lot, and they really feel a sense of accomplishment.”

Their teacher, Lindsay Sapp, sees a lot of value in Powers’ visits. “The students have grown in their knowledge of different movements as well as expressing themselves musically,” she said. “They’ve also grown as a group, and have learned to interact with each other in a more positive, supportive way. They love Alex, and she’s done a wonderful job of accommodating their different needs and getting them engaged.” 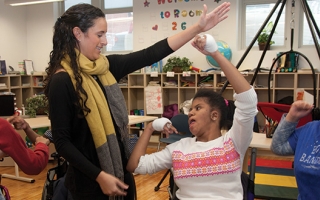