On Oct. 4, Ohio State celebrated the kickoff of the public phase of a $2.5 billion fundraising campaign with an event-filled day, including a concert on the Oval with the band O.A.R. — five members are alumni.

As Ohio’s land-grant institution, Ohio State is the doorway to the American dream for hundreds of thousands of students and alumni.

Students wouldn’t have access to ultra-intense lasers for undergraduate research.

By investing in Ohio State through the But for Ohio State campaign, you, our alumni and friends, represent the possibility that exists when people believe in an enduring mission. With your help, there is no predicting the magnitude of our impact on people’s lives. Please consider supporting the campaign and the college with a gift to the Ohio State Fund for the Arts and Sciences.

Ohio State’s high energy density physics SCARLET Laser Lab in the College of Arts and Sciences is one of only a handful of such labs in the nation. These laser systems produce star-like conditions generating high-energy X-rays of intense brightness that easily penetrate high-density matter. Most such laser facilities are located within national labs whose priorities revolve around national security.

But Ohio State wanted to build a significant laser facility driven by scientific curiosity to educate and train students to be the next generation of laser scientists. 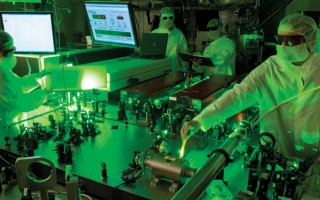