Jonathan Waters officially assumed the role of director of The Best Damn Band in the Land on Oct. 10. Waters, who had been interim director following the recent retirement of longtime director Jon Woods, was given a standing ovation by the band. (photo courtesy of Crockett Photography/The Ohio State University Marching Band)

"I am profoundly honored to be named the ninth director of Ohio State’s Marching and Athletic Bands. The bands have given me so much in my life and it is now my opportunity to pay forward. I view my role as that of stewardship and service, and I have the tremendous opportunity to guide, nurture, and instill the tradition of excellence in each student who passes through our ranks. My philosophy this season is ‘tradition through innovation,’ and I will direct every rehearsal and performance so that today’s innovations will become tomorrow’s traditions." {Jon Waters}

Waters’ football halftime shows this season have gained an enthusiastic audience; the halftime show during the Ohio State vs. Nebraska game posted on YouTube has been viewed by millions. 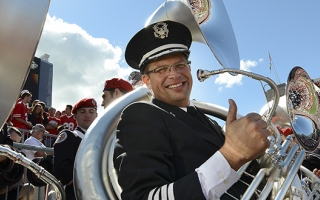