"I’m grateful I can move, so I’m moving." {Koritha Mitchell}

That’s the chant that keeps women motivated in a running club called Black Girls RUN!, according to Koritha Mitchell, founder of the Columbus chapter. This isn’t her only claim to fame; she is also an associate professor of English and author of an award-winning 2011 book on lynching dramas.

“I always talk about the importance of balance in your life,” she said. “It’s important not only to have reading and writing in my life, but also some serious exercise. I run to relax, and that’s crucial. I’m very serious about creating goals in every other part of my life, so I try to make running fun and about being grateful for being able to move. For me, that keeps it light.”

Black Girls RUN! is a national organization started in 2009 to combat obesity among African-Americans and to provide encouragement and resources to black women embracing a fitness routine.

“I had only been running for about nine months when I heard about Black Girls RUN!, and they were looking for an ambassador in our own city … and I was willing to give it a try,” Mitchell said. “It doesn’t matter if you’ve been running for years, or if you want to run some/walk some. It’s all about getting out there and moving.”

The group attracts African-American women from their late teens to their late 50s, Mitchell said. They meet several times a week including Saturday mornings, Thursday evenings, and a “Divas in the Dark” group that runs before the crack of dawn.

Finding an outlet for fitness and relaxation provides equilibrium in Mitchell’s otherwise-hectic life, which is focused on teaching, writing, reading, and research.

Her book, Living with Lynching: African American Lynching Plays, Performance, and Citizenship, 1890-1930 (Illinois Press, 2011) recently was honored as the best book published in 2011 by the American Theatre and Drama Society (ATDS).

“I was totally shocked to receive that award,” Mitchell said, “because their focus is usually on the history of mainstream stage productions. The fact that the ATDS could see the importance of my book’s very different focus really floored me.”

Living with Lynching also won the Society for the Study of American Women Writers award for the best book published between November 2008 and November 2011.

The book examines the role of lynching plays written in the early 1900s to help black communities come to grips with mob violence and the lynchings of black men.

Lynchings, she explained, were often portrayed as a way to stop a man deemed an “evil criminal,” when in fact, the killings were often in response to black men in post-Civil War society gaining status as landowners and business owners with families and voting rights.

“The plays I researched were looking at communities under siege,” she said. “They looked at the point of view of the targeted communities and targeted families. They helped people cope with violence, and examined the quality of black citizenship through stories about the black soldier, the black lawyer, the black family man.”

The dramas were one-act plays that could be read aloud or acted out in living rooms, in churches, and in schools. “They were a way for the people to share their stories. They helped people affirm themselves, and helped answer the questions, ‘How do I cope as a surviving family member, and as an American whose right to belong is constantly attacked? How do I hold on and preserve community truths for people who come later, for future generations?’” Mitchell said.

Her book looked at numerous black-authored lynching dramas written before 1930, many penned by women. She started her research when she was working on a doctoral degree at the University of Maryland.

“I got really interested in what black women authors were saying in the late 1800s and early 1900s,” she said. “I wanted to see if black women and white women ever worked together to create political change.

“I thought lynching would be an example of when they came together. But I was definitely wrong; it wasn’t an interracial issue in that time period. But by then, I was already hooked on the plays.”

This fall, Mitchell, who joined Ohio State’s Department of English in 2005, is teaching a class called “Womanhood in Black and White,” a course about how being a woman, white or black, shapes your experience as an American.

She also recently wrapped up a media leadership training program called Progressive Women’s Voices, directed by the Women’s Media Center, an organization founded in 2005 by Gloria Steinem, Robin Morgan, and Jane Fonda. She was chosen as one of 21 members of the 2012 class from more than 200 applications.

“It’s an amazing group of women who are poised to change public conversation and I’m honored to be in their company,” said Mitchell. “The class included three days of intensive media training, focused mainly on television. I learned a lot and it gave me a great respect for people who are progressive in the media.” The program has teleconference follow-ups and results in She-source — a national database resource of women who can be referred to the media.

What’s next on Mitchell’s to-do list? This fall, she started a monthly radio segment focusing on black-authored literature called Black LIT Radio. “It’s a way of extending my classroom. The 10-minute segments will feature the host interviewing me about black authors of classic works, and I’ll also interview living authors.”

The show airs on a radio station in Austin, Texas, but will be streamed live online, and can be accessed via the TuneIn app for Droid and iPhone, or through iTunes. Updates will be placed on her book’s blog (livingwithlynching.blogspot.com) and facebook page here.

Mitchell, who grew up in the South, now considers Columbus — and the university — home. “Ohio State is a top-tier research institution,” she said. “That allows me to do what I feel I’m meant to do.”

That, and it’s got some nice running trails. 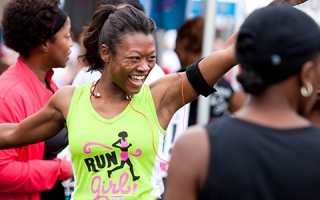