"Every day I remind myself that it is my duty and obligation to do my best for all of the (Tampa Bay Buccaneer) players and everyone whose path I cross. I’m a Buckeye; it’s what we do."

Kevin Elder has been dispensing invaluable care and advice to the Tampa Bay Buccaneers players for close to four seasons now—something he says his Buckeye experience trained him well for.

Kevin Elder (Microbiology, 1995) has a lot of ties to Ohio. He went to Jackson High School in Massillon, Ohio, near the home of football legend Paul Brown and more than 20 NFL greats. He attended Ohio State as an undergraduate, where he discovered a love of microbiology, and he earned his MD from the Medical University of Ohio/University of Toledo. He fell in love with his wife Stephanie in Ohio at a Buckeye football game.

“I had a wonderful experience at Ohio State,” said Elder. “Some of my closest friendships were forged my freshman year in Taylor Tower (Taylor 12) — we still get together every year!”

Elder enters his fourth season with the Tampa Bay Buccaneers as team physician this year. Additionally, he is an assistant clinical professor of family medicine for the University of South Florida and practices as a partner of the HealthPoint Medical Group in South Tampa.

Elder earned his way to Ohio State from Jackson High School with an engineering scholarship. However, late in his freshman year he changed his major to microbiology with the ultimate goal of going to medical school. A death in the family, two deaths actually, opened his heart and eyes to the idea of a career in medicine.

“My great aunt lived with us and I watched her die of breast cancer,” said Elder. “It made such an impression on me — I decided right then and there that I wanted to be in a job where I could help people heal.”

Elder’s grandfather died just a few years later. Watching and interacting with the doctors who cared for his grandfather gave Elder insight into the possibility of combining compassion with science.

In his sophomore year, Elder was invited to join HELIX, a student honor society dedicated to social interaction and service for students majoring in the biological sciences who demonstrate superior academic and leadership capabilities. At the same time, he began serving as a member of the arts and sciences student council.

“Those years volunteering in HELIX and serving on the student council, my junior year as vice-president and my senior year as president of the ASCSC, taught me a great deal about working with faculty and students,” said Elder. “You learn to listen and be receptive to others’ needs and viewpoints.”

Listening and leading has served Elder well as he has helped countless numbers of high school athletes as a volunteer for several community schools and organizations, including Tampa Catholic High School, where he is going into his tenth year as volunteer team physician.

"I believe in service to community, said Elder. I can offer my skills and expertise and I have a responsibility to — it’s an opportunity for me to hopefully model a good career path and an example of someone who can give back to a community."

Elder has seen firsthand how sports teaches invaluable lessons to young athletes and even younger students. “Sports teach you how to fail, get up, and try again,” said Elder. “You learn to focus and take pride in a task, and those skills follow you the rest of your life. Work ethic and determination are major factors that cultivate success and can separate you from the pack.”

With his own children, Emma, Liam, and Lily, Elder practices what he preaches. “It matters more that my children care about what they are doing — it isn’t all about winning, it’s about making a choice to care,” said Elder. “At the end of the day, I want them to be able to say ‘I did my best.’”

Elder’s work and family are now in Tampa Bay but a large piece of his heart is still in Ohio. 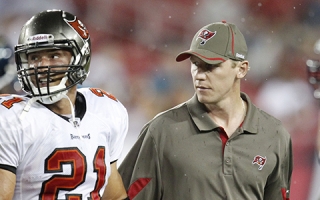