A Place in History 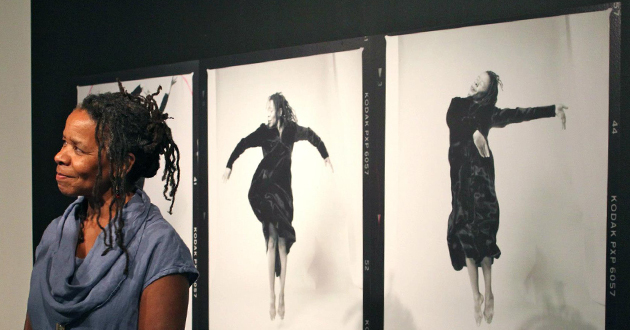 “It turns out I’m pretty good at steering a sailboat. I like the way my body weight shifts with the movement of the water.”

That’s how Bebe Miller describes the new maritime hobby taken up with her husband of four years, an ocean engineer who lives in Seattle. Moving and shifting with the waves is also an apt description of Miller’s very approach to life, as she, at 61, continues to embrace all sorts of new directions, endeavors, and accolades.

Miller, Arts and Humanities Distinguished Professor in the Department of Dance, dancer, choreographer, and founder and director of the New York-based Bebe Miller Company, just wrapped up quite a summer with a residency, a world-premiere new work, a retrospective exhibition, and several prominent awards.

“These honors are incredible, and it made me think, ‘OK, I guess I know what I’m doing.’ But the questions are still there. As a teacher, you don’t have to know everything but you do have to keep asking the questions,” Miller said. “I guess I am measurably comfortable with my own uncertainties.”

Department of Dance Chair Susan Petry concurs. “One of the things I find remarkable about Bebe is her persistence,” she said.

“Choreographers sometimes stop what they’re doing or feel like they’re done — but not Bebe. She stays curious, stays thoughtful. She’s a mature woman and artist, and she is still doing experimental and envelope-pushing projects.”

For example, Miller recently completed her fourth creative residency at Ohio State’s Wexner Center for the Arts where she created an evening-length duet called A History. The piece, featuring longtime Bebe Miller Company dancers Angie Hauser (MFA, Dance, 1999) and Darrell Jones, drew upon their history of collaboration to generate new material. A History was staged Sept. 27-30 at the Wexner Center for the Arts. She is on sabbatical this academic year, and will take the performance on the road, touring across the United States.

Miller has partnered with the Wexner Center in the past, too, and for good reason, according to Chuck Helm, director of performing arts.

"Bebe Miller may very well be the artist who has received the highest degree of support to create new work, through creative residencies and commissions, in the history of the Wexner Center, ranging from work for her dance company to unique collaborations, multimedia explorations, and works for video." {Chuck Helm}

As a companion to the premiere of her new work, the Urban Arts Space in downtown Columbus hosted Bebe Miller: Tracing History, an exhibition that explored the history of her choreography, from her earliest days as part of the downtown New York City dance scene to her current endeavors.

In recent months, Miller also has been honored with several national awards. She was one of 21 of America’s most vital and productive performing artists announced as the first class of Doris Duke Artists. They shared a total of $5.775 million awarded in a new initiative of the Doris Duke Charitable Foundation, and will receive an unrestricted, multi-year cash grant of $225,000, plus as much as $50,000 more in targeted support.

Additionally, Miller was a 2012 recipient of the J. Franklin Jameson Archival Advocacy Award given by the Society of American Archivists. The national award honors an individual, institution, or organization that promotes greater public awareness, appreciation, or support of archives. Much of Miller’s archival materials are housed at Ohio State’s Jerome Lawrence and Robert E. Lee Theatre Research Institute.

A key to Miller’s success seems to come from being part of a larger community, a larger conversation. “Students appreciate her so much,” said Petry, “because of her thoughtfulness, her ability to stay curious, to stay interested in their work. She is completely engaged with them as a faculty member, always thinking and asking questions, and looking at the macro level.”

In fact, as Miller was working on the exhibition, sorting through boxes of photos and journals, she said, “I realized that I am a community person. If an idea is gnawing at me, I bring it up and we have a forum about it, an ongoing conversation. I get a lot of inspiration from people in the room, from our collaborative work.”

The New York native, who considers Columbus her home, also is proud to be a Buckeye. “I can trace my connection on a daily level to Ohio State,” she said.

And vice versa. “It’s a big deal that Bebe Miller is part of Ohio State,” said Petry. “For the university to have a premier artist like Bebe in our midst is wonderful. People always want to see what Bebe Miller is doing.” 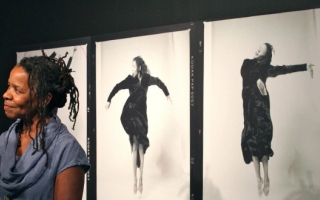