Ohio often finds itself in a national news media spotlight as a bellwether in presidential politics and 2012 will be no different.

No Republican has ever made it to the White House without carrying Ohio; no Democrat since John F. Kennedy has won the presidency without Ohio either.

Voters in Ohio correctly picked the winning presidential candidate in the last 11 elections.

Two arts and sciences alumnae, both Ohio natives, have been following and documenting the race to the White House from a unique perspective — as winners of a Huffington Post contest to cover the political conventions as citizen journalists.

Pamela Powers Hannley (Journalism, 1973) and Jessica Wilt (MFA, Dance, 2002) were two of eight citizen journalists selected from around the country to participate in Huffington Post’s Off The Bus, a citizen-based reporting project created to cover the 2012 elections from a distinctively “un-Beltway point-of-view.” 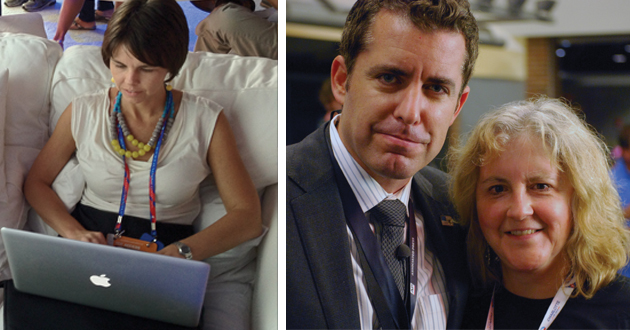 Jessica Wilt (left) in Tampa, Florida, along with bloggers from around the country, was working around the clock covering the unconventional at the RNC. Pamela Powers Hannley (right) and Comedy Central’s Jason Jones, took aim at the stories behind the scenes at the DNC.

“I’m delighted that these eight community reporters, by bringing their unique insight and perspective to the campaign, will be joining HuffPost’s mission of going beyond the one-dimensional, horse-race aspect of election coverage,” remarked Arianna Huffington, president and editor-in-chief of HPMG, in an online announcement of the winners.

“If someone had told me a few months ago I would have been reporting for the Huffington Post at the Republican National Convention, I would have told them they were nuts,” mused Wilt. “After all, I’m a tap dancer from Ohio!”

Wilt, a native of Dublin, Ohio, is director of arts education for Flamenco Vivo Carlota Santana in New York City. Actively involved in arts and education advocacy, she is a member of the board of directors for the New York City Arts in Education Roundtable, a VOICE Charter School Board Trustee, and sits on the Arts Education Council with Americans for the Arts where she is a guest ARTSblog contributor. Previously, Wilt served as the education and outreach manager for Dance Theatre of Harlem’s Dancing Through Barriers program.

“When I entered Huffington Post’s Off The Bus contest, I did it not because I thought I had a chance at winning, but as a way to actualize and affirm my interest in politics and journalism,” said Wilt.

“Although I wasn’t able to cover half the ground at the RNC that I had planned before the week began, I happened upon a few surprises along the way, like meeting local activists in the Tampa community such as the CODEPINK women’s rights activist group and having two guest appearances on Huffington Post’s new online news outlet HuffPost Live.”

Wilt earned a BA in modern dance with a dance education emphasis from the University of South Florida and an MFA in choreography from Ohio State. She began her career as a dancer and musician where she eventually realized she wanted to contribute to the arts world not just as a performer, but as an educator, arts administrator, and advocate.”

“I wish I could have gone to Charlotte as well to cover the DNC,” said Wilt. “I was just finding my rhythm and figuring everything out and then it was ‘time’s up!’ I hope to continue exploring career options in the fields of journalism, television, or even running for public office someday. I see a new door opening up for me.”

You can read Wilt’s posts from the RNC at huffingtonpost.com/jessica-wilt. You can also follow Wilt on Twitter: @JessicaLWilt.

Hannley’s journey to the DNC was 40 years in the making. As a journalism student at Ohio State, Hannley, then Pamela Powers, covered the 1972 McGovern-Shriver race for The Lantern, Ohio State’s student newspaper. A self-described political junkie even then, she grew up in a working-class household in Amherst, Ohio. She wrote about campus campaign activities, traveling on the press bus with national media, while covering candidate appearances. But, she never got as far as Miami, the site of the 1972 DNC.

“I wanted to go to Miami in the worst way but there was no money to send students to a convention and I couldn’t afford to pay my own way,” said Hannley.

Forty years later, Hannley was thrilled to be chosen as one of a handful of bloggers from around the country to visit the DNC in Charlotte, North Carolina, by the Huffington Post. She covered the convention to tell the stories that mainstream media miss, the ones that slip through the convention halls — both inside and out.

“While some reporters covered the convention from inside the DNC media center or the arena by watching the speeches, mainstream news coverage, and the social media, Huffington Post’s Off the Bus citizen journalists like myself covered the street-level stories that would have been missed otherwise,” observed Hannley. “It was exhilarating; I felt like a real citizen journalist.”

Hannley writes for the Huffington Post, Blog for Arizona, and TucsonCitizen.com, as The Tucson Progressive. She has had more than 30 years of experience in written, visual, and electronic communication — including freelance writing, photography, graphic design, and consulting. She is the managing editor of The American Journal of Medicine and has published scholarly articles with the journal.

Hannley received her BA in journalism from Ohio State in 1973 and a master’s degree in public health from the University of Arizona. Although a native Ohioan, she has lived in Tucson, Arizona, since 1981.

Just how much has changed since the early days of covering a national political campaign?

Hannley sums it up this way: “How different from 1972, when we had to take the shuttle bus or the bike back to The Lantern news room to use the manual typewriters to compose our stories and the darkroom to produce our photos.”

You can read Hannley’s posts from the DNC at huffingtonpost.com/pamela-powers-hannley. She is also on Twitter, @p2hannley; her videos from the DNC can be viewed on YouTube.

In the 2008 presidential elections, 51.1 percent of American citizens between ages 18 and 29 voted, according to the Center for Information and Research on Civic Learning and Engagement, a 2.1 percent increase from the 2004 election and the highest turnout since 1992.

Read about our undergraduate students at the conventions. 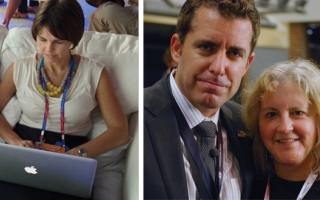