"Geographers are specialized in focusing at the heart of the relationship between humans and their environment, and in recognizing that the connections are two way." {Kendra McSweeney, associate professor of geography}

In spring 2011, three Ohio State geographers ventured up the Patuca River in the remote rainforests of eastern Honduras. A goal of the trip was to work with the indigenous Tawahka and Miskito who live there to assess the potential impacts of a massive hydroelectric dam under construction upstream. 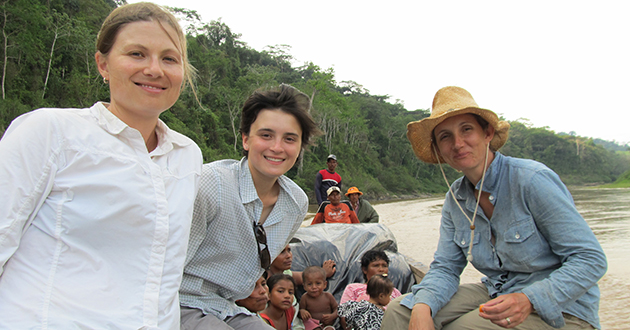 The trip was led by Kendra McSweeney, an associate professor of geography who has a primary interest in the relationship between people and natural resources. She was joined by Zoe Pearson, a PhD student in geography with several years of field work in Ecuador under her belt, whose research focuses on understanding how political dynamics shape human-environment interactions. Sara Santiago, a senior majoring in geography and international studies, also joined the trip, bringing with her experience of fighting social injustice in Ohio.

During the trip, the three conducted a survey of more that 150 Tawahka households to assess how Tawahka health, agriculture, and income have been changing. They also did in-depth interviews with indigenous leaders, and spent time with river dwellers to understand locals’ perspectives on their ongoing adaptation, and the likely impacts of the dam on their lives and livelihoods.

“The Tawahka are irrevocably linked to the land,” McSweeney said. “Their livelihoods are based on their ability to grow and sell cacao, rice, beans, cassava, plantains, and other crops.” 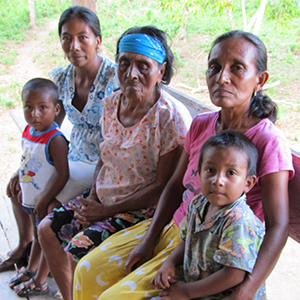 For centuries, the Tawahka, one of Honduras’ smallest indigenous groups, have lived and worked along the Patuca River, the central artery of the Moskitia rainforest, Central America’s most biologically diverse tropical wilderness and one of the region’s largest remnants of intact rainforest. There are no roads in the Moskitia rainforest, so the Patuca River is a life-line for the group; it transports crops for sale and its fish provide a vital source of protein.

And now, the construction of a dam threatens it all.

In January 2011, the Honduran government signed a contract with the Chinese company, SinoHydro, to start construction on the first of three dams within the Patuca River basin. The Patuca is Honduras’ biggest river, and it has stoked the dreams of hydroelectric developers for more than 40 years. Designed to sell power to neighboring Nicaragua, two of the three dams would block the main river channel.

McSweeney began her work in the Tawahkan community in 1994, as a research associate for the Harvard Institute for International Development (HIID). Since then, she has traveled to Honduras to track the effects on Tawahka lives of climate-related disasters, such as Hurricane Mitch; land loss from an aggressive colonization frontier, outside encroachment (narco-trafficking), as well as the Tawahka’s own population growth.

This was the first time McSweeney brought an undergraduate and graduate student into the field with her. She was aware that the trip would put physical and mental demands on the students. Temperatures were routinely in the high 90s; they stayed primarily on the floor of a local building where they could rig up their mosquito nets. Getting and treating water to drink could take more than an hour each day. Bathing was in a local stream. But McSweeney was confident that the students were not only up to it, but would benefit from the challenge, especially given that Tawhaka families were eager to collaborate.

“Whenever possible, it’s great to engage students in this kind of hands-on research and collaboration,” said McSweeney. "They bring an added curiosity and inquiry that enriches and informs the project; and, in turn, they get to have a life-changing experience."

Pearson helped conduct the household surveys and acted as a sounding board for the villagers to voice their concerns about the construction project. For more than a month, Santiago accompanied Pearson on interviews and together they lived and worked alongside villagers.

“Working as a team is an amazing experience,” said Pearson. “You learn how to forge relationships and what a long-term research project can look like.”

For an undergraduate, the experience of being in the field and working so closely with a graduate student and professor can be transformative. “I really learned how to be a geographer,” said Santiago. “I was able to see another way of life and the very real risks to that way of life.”

For her part, McSweeney believes that Pearson and Santiago’s participation in the project was invaluable.

“Having Zoe and Sara as part of the research group forced me to go beyond simply stating what I know to explaining how I think I know it,” said McSweeney. “As a researcher, you never really learn anything, until you have to teach it.”

What they all have learned is that the proposed Patuca III dam will choke off the enriching sediment in the Patuca River, slowly starving the downstream agricultural systems of the Tawahka and other groups. It will result in lower water tables and soil humidity, which in turn will negatively impact crop-growth. Canoe-based trade and navigation will be severely curtailed, effectively destroying trade.

“The Tawahka are river people,” said McSweeney. “Their lives and livelihoods pulse with the river. If this dam project moves forward, we may witness the complete decimation of a centuries-old way of life.” 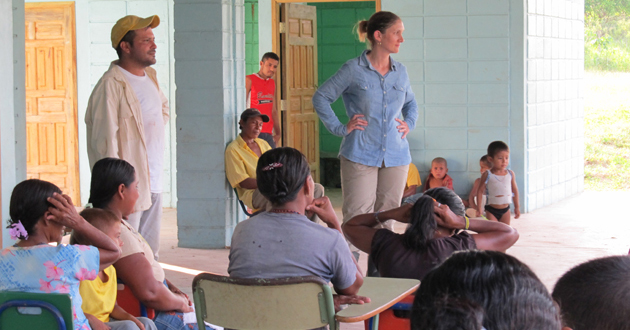 Back home, McSweeney, Pearson, and Santiago volunteer their time, as part of an international effort to encourage the Honduran government to work more closely with indigenous communities to mitigate the potentially devastating effects of the dam on downriver communities, and to explore alternative paths to electricity generation.

Pearson will be traveling to Bolivia this summer to continue her research on the impact of the war on drugs on indigenous communities there. She is expected to receive her PhD in 2015.

Santiago is president of the campus chapter of OxFam America, an international development organization working to find lasting solutions to poverty and injustice. She will graduate in June 2012 and plans to work in the nonprofit sector and eventually attend graduate school in geography. 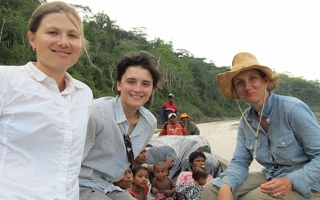