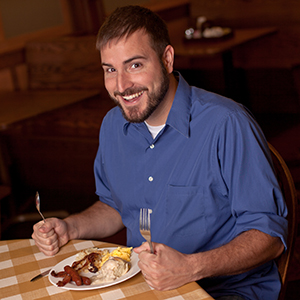 From the intense outdoor adventure seekers to the self-proclaimed breakfast foodies, Arts and Sciences alumni Nicholas Dekker (left) and Michael Evans are using social media to celebrate and explore the unexpected pleasures of Ohio with their blogs: Breakfast with Nick, and OHventures.

For Nicholas Dekker, breakfast isn’t just the the most important meal of the day, it’s also the most delicious. With hundreds of local restaurants and diners each serving up their own unique breakfast style, Dekker has discovered that Columbus is the perfect place for the breakfast connoisseur. “Breakfast can be solidly traditional or endlessly innovative. It features a wide range of foods: sweet and savory, light and heavy, fruits and meats, dairy and starches, vegetables and proteins.”

Inspired by his passion for breakfast food and love of Columbus, Dekker, a lecturer in the Department of Theatre, began Breakfast with Nick after completing graduate school at Ohio State in June 2007. “Most people are unaware that Columbus has a fascinating breakfast and brunch scene. This city has so much to offer and I want people to go out and experience these unique local places for themselves.”

The thriving success of Dekker’s blog ultimately led to his book, Breakfast with Nick: Columbus, which serves as a guide to the coffee shops, donut shops, and restaurants serving up tasty breakfast fare in Columbus. Dekker’s food blog and book have garnered him local attention from the Columbus Dispatch, Writers Talk, Columbus Alive, Columbus Crave, Good Day Columbus, WCBE Foodcast, and The Lantern. Recently, he was featured as one of Columbus Business First’s “Forty Under 40” honorees.

Fellow alumnus and adventure seeker, Michael Evans, is the voice behind the increasingly popular outdoors blog, OHventures. Evans created the blog to showcase the lesser-known outdoor activities that can be enjoyed throughout the Buckeye State. He uses video and images to capture his adventures to the less explored areas of Ohio. Evans said, “I love the outdoors and I wanted to inspire others to explore Ohio. You don’t have to go to California or Colorado to go hiking or parasailing; you can actually do that right here.” 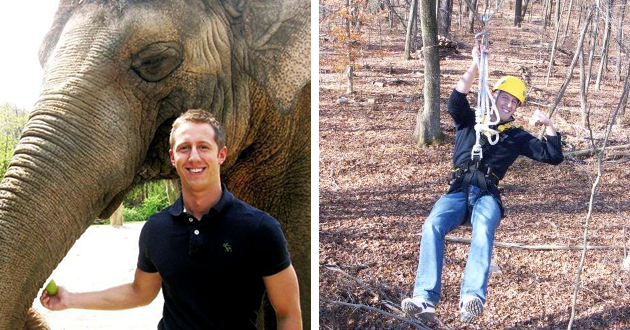 (left) Evans at Cincinnati Zoo & Botanical Gardens, posing with African Elephant; (right) Evans at the Ozone Zipline Adventures at YMCA Camp Kern in Oregonia, Ohio. This is the largest zipline tour in Ohio and the Midwest.

Evans has been to cities like Akron, Canton, Toledo, Chillicothe, Youngstown, Columbus, Zanesville, and countless others. He’s written about Ohio landmarks like the Statehouse, the Harding Memorial, and the Mansfield Reformatory; as well as staple events such as Warrior Dash, Pelotonia, and the Ohio State Fair.

For the past two years, OHventures has seen a significant increase in readership and followers. Evans partners with the Ohio Division of Tourisms blog, Discovering Ohio, as a guest blogger. He’s currently blogging about his training for the Capital City Half-Marathon in Columbus, Ohio, where he’ll be featured as a celebrity runner.

Evans has been interviewed by Columbus Alive and Writers Talk. Currently, he plans to transform his blog into a book, like fellow blogger, Dekker. 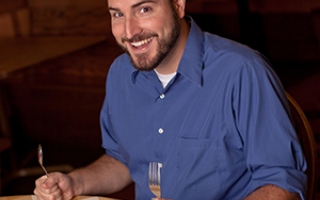