The College of Arts and Sciences 2013 Distinguished Alumni Awards dinner was held on April 26. The event gave us an opportunity to recognize and honor some of our outstanding alumni whose accomplishments are tangible evidence of the growing distinction of arts and sciences alumni. This years winners are: Kim Jacobs and Dennis Liotta for distinguished achievement; and Jack and Zoe Johnstone for distinguished service. 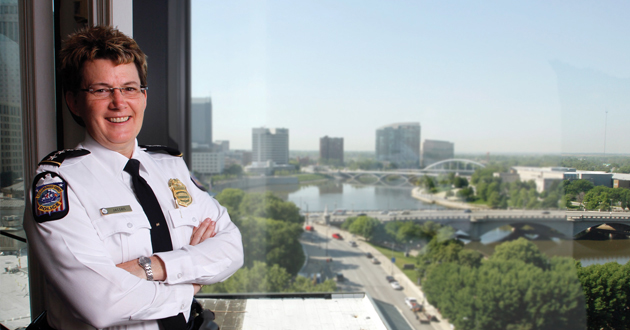 "I grew up at Ohio State. I met people from all walks of life and from different backgrounds. I found my calling in the sociology and criminology classes."

Kim Jacobs (sociology, 1979) has had a remarkable, pioneering career inside the Columbus Division of Police. On April 6, 2012, Jacobs completed her climb from patrol officer to take the helm of the Columbus Division of Police, becoming the first woman to hold the post—one of only a handful of female chiefs in a major metropolitan area in the nation—and the first open member of the lesbian, gay, bisexual, and transgendered community to wear the city’s top badge.

A native of Ashland, Ohio, Jacobs graduated from Ohio State in June 1979 with a degree in sociology. In October 1979, she entered the Columbus Division of Police. This was only four years after Columbus Police started training women to work in patrol. After patrolling the streets of Columbus for seven years, Jacobs was promoted to sergeant. In 1991, she was awarded the rank of lieutenant.

In 1995, Jacobs earned the rank of commander—the first woman in the history of Columbus police to do so. She commanded the Communications, Training, and Internal Affairs Bureaus and a Patrol zone that included the Ohio State University campus area, the Short North, Clintonville, and the far northwest neighborhoods.

In 2009, Jacobs attained another first—by being the first woman to be promoted to the rank of deputy chief. As a deputy chief, Jacobs oversaw the Administrative Subdivision, which handles budgeting, personnel, and other areas. She also served as the Division’s liaison to the mayor and city’s safety director.

Throughout her career, Chief Jacobs has been involved in projects aimed at improving operations, community relations, and recruitment. Among those accomplishments are her work in helping to set up the Division’s Citizen Police Academy, the development of a separate Domestic Violence report, the reorganization of the Internal Affairs Bureau to focus on citizen complaints, and the establishment of new precincts. For more than 20 years, Jacobs has volunteered her time to speak to Ohio State undergraduates enrolled in sociology classes on policing and criminology.

Jacobs serves on the board of directors for the Center for Family Safety and Healing, the board of trustees for the Ohio Law Enforcement Foundation, and is a member of the United Way’s Women’s Leadership Council and Pride Council. 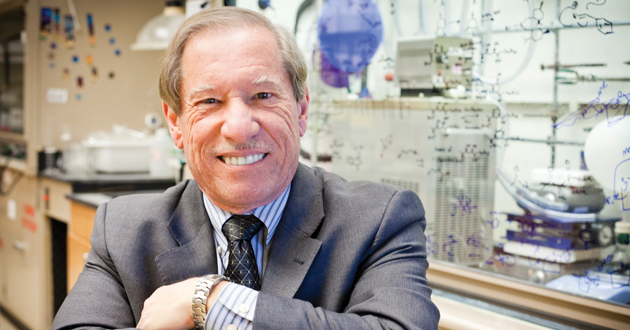 "The quality of the scientific community I encountered during my postdoctoral training in the Department of Chemistry was simply amazing. Professor Leo Paquette set my standards for professionalism, productivity, and scientific quality."

Dennis Liotta (postdoctoral research fellowship, chemistry, 1974-76) has distinguished himself as an international leader in academic organic chemistry. He is the Samuel Candler Dobbs Professor of Chemistry at Emory University, executive director of the Emory Institute for Drug Development, and co-director of the Emory/Republic of South Africa Drug Discovery Training Program. He also is co-inventor of several of the world’s most successful and commonly used anti-HIV/AIDS drugs.

As the HIV/AIDS epidemic emerged as a national and global crisis, Liotta began research and experimenting with anti-viral drugs. In the late 1980s, he and his team developed two of the major drugs in the HIV/AIDS arsenal: 3TC and FTC. These breakthrough discoveries are used by approximately 80 percent of all HIV/AIDS patients who are receiving treatment.

For years, Liotta strove to establish a biotechnology company focused on the needs of the developing world. In 2008, iThemba Pharmaceuticals officially began operations in Johannesburg, South Africa. iThemba is just one component of Liotta’s effort to foster what he considers a vital, missing element in global health—human capital in the developing world. The Emory/Republic of South Africa Drug Discovery Training Program brings South African scholars to the U.S. for hands-on research training.

Liotta is a fellow of the Alfred P. Sloan Foundation, the recipient of a Camille and Henry Dreyfus Teacher Scholar Fellowship, an Alexander von Humboldt Senior Scientist Award, the 2005 Herty Award, and the Thomas Jefferson Award—the highest award given at Emory. Liotta was recently inducted into the American Chemical Society division of Medicinal Chemistry Hall of Fame.

Liotta has served as a member of the scientific advisory boards and boards of directors of several biopharmaceutical companies including: Achillion, Triangle Pharmaceuticals, Altiris, Pharmasset, iThemba Pharmaceuticals, and FOB Synthesis.

While at Emory, Liotta has authored more than 230 research publications and more than 70 issued U.S. patents.

During the past three decades, he has also developed a great deal of experience in the discovery and development of pharmaceuticals and has served as a consultant to many major pharmaceutical firms, including Merck, Glaxo, Burroughs Wellcome, Boehringer Ingelheim and Johnson & Johnson.

Liotta received his PhD in organic chemistry in 1974 from The City University of New York. He completed his post-doctoral training at Ohio State under the direction of Leo A. Paquette. 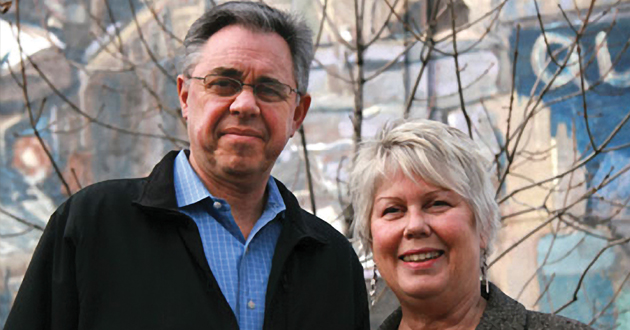 "We have a longstanding, personal, and increasingly urgent devotion to new music. Why? Because it shows us that integrity, hard work, and common purpose make a difference in life. The faculty, staff, and students of the School of Music embody these qualities through their composing, teaching, and performance." {Jack Johnstone}

Jack (PhD, musicology, 1984) and Zoe (honorary alumna) Johnstone met as music students at San Jose State University and have always shared an interest in contemporary music. In 1979, they moved Columbus from California so that Jack could pursue a PhD in musicology at Ohio State.

In 2000, they established the Johnstone Award for Excellence in Musicology as an endowment fund for the School of Music. The award provides $2,000 each year to an Ohio State musicology graduate student selected by School of Music faculty.

Spurred by a desire to stimulate the long-term health and vitality of the woodwind area in the School of Music, Jack, a bassoonist with the Upper Arlington Community Orchestra, and Zoe worked with faculty to develop a series that would focus on each woodwind instrument, one at a time.

The result was the Johnstone Woodwind Master Series, an annual event that enhances the School of Music’s curriculum by bringing eminent teachers and performers to campus, highlighting newly commissioned works by recognized composers, encouraging and presenting student compositions for woodwinds, and recognizing the work of an Ohio woodwind music teacher with an award.

In 2007, Jack and Zoe established the Johnstone Fund for New Music at the Columbus Foundation. Designed to generate new collaborations between local composers and musicians and to introduce new music to wider audiences, the fund offers grants to commission new art music, which includes contemporary classical music, some forms of jazz, and dance. The Fund for New Music provides support for performances by Ohio State’s New Music Collective, an ensemble of student and faculty musicians; ensembles in the university’s dance department; and new works for the School of Music’s annual Contemporary Music Festival.

The generosity of the Johnstones has created the most exciting and successful stimulus to the support of new concert music in the cultural history of Columbus and Central Ohio. They are committed to invigorating the learning experience and to advancing the energy and creativity of the faculty and students in the School of Music.

“We have had the privilege of meeting and working with some of the most talented and dedicated students and faculty from the School of Music – whether helping them realize their dreams of composing new music or supporting their efforts to build new collaborations and new performances. Their talent and energy inspires us and we find it so rewarding to see their works come to fruition. There is a mysterious energy at work when you bring such talented people together. What we do with our money, is, we fund energy and creativity.”

Over the last several years, Jack and Joe Johnstone have helped finance nearly 200 concerts and dozens of commissions of new music and other performances by Ohio State students and faculty as well as artists from Central Ohio and all over the globe! 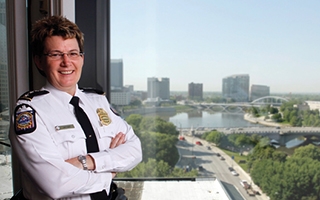