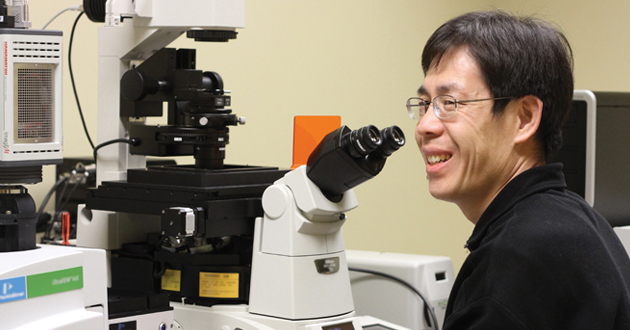 ERIC HEALY, associate professor, speech and hearing science; and DELIANG WANG, professor, computer science and engineering,  $1.8 million from the National Institute on Deafness and other Communication Disorders to develop an algorithm to improve speech reception in noise by hearing-impaired listeners.

TREVON LOGAN, associate professor, economics, elected president of the National Economic Association, founded in 1969 as the Caucus of Black Economists to promote the professional lives of minorities within the profession. Logan is the youngest president in its history.

BARBARA PIPERATA, associate professor, anthropology, received the Michael A. Little Early Career Award from the Human Biology Association for significant contributions to the field of human biology and the promise of future important work in the field.

R. KEITH SLOTKIN, assistant professor, molecular genetics, NSF CAREER Award for outstanding young researchers in their fields. Slotkin studies transposable elements—‘jumping genes’—stretches of DNA that can duplicate or move from one location in the genome to another.

WENDY SMOOTH, associate professor, Women’s, Gender and Sexuality Studies, has been elected president of the National Conference of Black Political Scientists, 2013-2015. Smooth focuses on women’s experiences in political institutions and the impact of public policies on women’s lives. Her new book, Perceptions of Power and Influence: The Impact of Race and Gender in American State Legislatures, will be published next year.

GALAL WALKER, professor, Department of East Asian Languages and Literatures (DEALL), and MARI NODA, DEALL professor and chair, $9.6 million from the U.S. State Department to implement the Critical Language Scholarship Program in East Asia. Ohio State is the only university in the country to receive this award. (see story pg. 11)

JULIA ANDREWS, professor, history of art, was the first American art historian to work in China after U.S.-China relations were established in 1979. Andrews is one of the few undisputed authorities on modern Chinese art in the English language. Her groundbreaking research, publications, and exhibitions are widely credited with establishing this now thriving subdiscipline of art and positioning Ohio State as one of the world's premier institutions for the study of modern and contemporary Chinese art. She has authored more than 40 scholarly articles and essays in high-profile journals, edited or co-edited five exhibition catalogues, and curated or co-curated seven exhibitions in the U.S. and abroad. As the founding director of the Institute for Chinese Studies, Andrews helped secure a $2 million grant for the development of Ohio State's undergraduate curriculum in Chinese studies. She is a recipient of an ACLS Post-Doctoral Fellowship and a Fulbright Senior Fellowship to Japan.

WILLIAM AUSICH, professor, earth sciences, is an international authority on fossil echinoderms, particularly crinoids, which he often describes as "starfish on a stick." His special interest is the evolution and taxonomic classification of crinoid species that existed between 550 million and 250 million years ago, along with the evolution of crinoid faunas through major episodes of climate and biosphere change. Ausich's work combines traditional descriptive and specimen-based approaches of paleontology with quantitative and model-based approaches of paleobiology. His publications include seven books and monographs, 19 book chapters, 11 field guides, more than 150 refereed publications, and 28 keynote presentations. His research has been funded almost continuously for the past 28 years by the National Science Foundation and National Geographic. He is an elected Fellow of the Geological Society of America, the American Association for the Advancement of Science and the Paleontological Society and its past president.

DAN LEVIN, SBS Distinguished Professor, economics, has made seminal contributions to economic theory and experimental economics, focusing on auction markets. He excels in carefully constructing experiments to test well-formulated theoretical questions and using the insights gained to advance economic theory. His contributions have led to important new public (and private) policy implications, establishing Levin as a world leader in experimental auctions literature. He has published more than 50 journal articles, which appear in his profession's top scholarly journals. His works cover a variety of topics that include auction markets, behavioral decision-making, industrial organization and mergers, international trade, political economy and public policy. His book, Common Value Auctions and the Winner's Curse, is universally recognized as the authoritative source on the subject.

ANNE MCCOY, professor, chemistry and biochemistry, is a leader in the field of theoretical spectroscopy. Her work focuses on developing relationships between experimental results from molecular spectroscopy, which describes how molecules interact with light, and the nature of the fundamental interactions between atoms that bond them into molecules and the weaker interactions that hold molecules together. McCoy has published more than 130 papers in leading journals in her field, including five papers published in Science. Her work has been funded by the National Science Foundation since 1999. She has received additional funding from the Office of Naval Research and the Air Force Office of Scientific Research. She is a past recipient of both the NSF CAREER and Camille Dreyfus Teacher/Scholar Awards; and is a fellow of the American Physical Society, American Chemical Society, and AAAS.

The President and Provost’s Award for Distinguished Service recognizes faculty whose service has been extensive and made a positive impact on the quality of the university.

BRIAN MCENNIS, professor, mathematics, Marion campus; colleagues say McEnnis’ commitment to the university is exemplary; Serving on University Senate; working tirelessly to extend the reach and visibility of Ohio State into our communities; making a significant impact on mathematics instruction both in the classroom, and work on policy committees.

The Alumni Award for Distinguished Teaching recognizes superior teaching by faculty nominated by students and colleagues.

KAY HALASEK, associate professor, English, is called, “awesome; unpretentious; engaging, inspirational,” by her students. One said, “If I hadn’t taken her course, I wouldn’t be starting a career in secondary English education.” Another commented, “She excels at fostering collaborative inquiry and genuine conversation, treating students as equal partners in learning.”

ERIN MCGRAW, professor, English; “dedicated, giving, enthusiastic, supportive;” were just a few superlatives students used to describe her. One said, “She made every student feel welcome and important in her classroom;” and another commented, “In one course, she taught me things I hadn’t learned in three years of graduate work.”

JUAN ALFONZO, associate professor, microbiology; is known for “infectious enthusiasm, positive energy, ability to connect and inspire students; approachability, and a real love and knack for teaching.” Several students said, “He treated us like equals and colleagues; I wish he taught more courses.”

REBEKA CAMPOS-ASTORKIZA, assistant professor, Spanish and Portuguese; ”Her dedication to her students is amazing—she is always available to meet with us outside the classroom,” students say. “She helps us achieve our full potential; is engaging, approachable and patient, but constantly challenges us to think for ourselves.”

DOUGLAS SCHUMACHER, associate professor, physics; his students say, “He makes learning easy and fun,” and  marvel at his accessibility and helpfulness to the point of “offering to help us prepare for the GRE!” One student's comment summed it up, "His enthusiasm for teaching other people physics is obvious--he breathes physics!”

MATHEW COLEMAN, associate professor, geography; Coleman’s students say he changed their lives. “He encouraged me to think critically and interdisciplinarily;” “His class is the reason I switched my major to geography;” “He helped tune my brain…If not for him, I wouldn’t be working on a graduate degree;” and the supreme accolade, ”He’s why I came to Ohio State.”

DAVID HOFFMAN, professor, history; students refer to him as, “a creative, innovative teacher, genuinely interested in both teaching his students and learning from them." One student said, “He is passionate about his subject and every day he brought his ‘A’ game.” 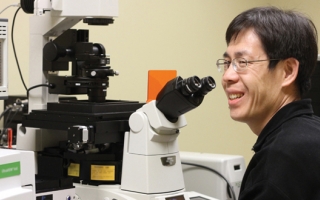