Brave Heart: Journey to Jerusalem and the MDA

Allegra Lewison’s Journey to Jerusalem and the MDA 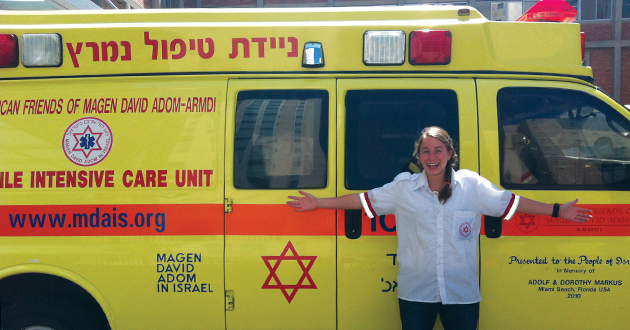 Allegra Lewison doesn’t shy away from the sight of blood. As a high school student in Parkland, Florida, she shadowed her neighbor, the assistant fire chief of the Coral Springs Fire Department, on ambulance runs.

“I always knew that I wanted to volunteer in the medical field,” said Lewison, a third-year neuroscience major with a minor in Hebrew.

A chance encounter at an accident scene further cemented Lewison’s decision that medicine was her calling.

In the spring of her senior year in high school, Lewison, along with her mother and grandmother, were heading north on I-95 toward Orlando, when they came upon an accident. Two men were lying in the emergency lane of the freeway — one on his side with his motorcycle helmet still on. Lewison ran over to help the man while others attended to the second accident victim.

“The man’s name was Boaz and he was mumbling in English and Hebrew,” said Lewison. “When I began to talk to him in Hebrew his eyes lit up.”

Ambulances and news trucks arrived on the scene. Both accident victims were taken to the hospital. Lewison continued on to Orlando, but she couldn’t get Boaz or the accident out of her mind.

That evening, on the way back from Orlando, Lewison decided that she needed to find the hospital where the motorcycle driver was admitted and stop by to see him.

“It was Friday — Shabbat — and I didn’t want him to be alone,” explained Lewison. “I just felt that I had to be there.”

Lewison carried that memory with her when she came to Ohio State and last summer when she spent six weeks in Israel, volunteering with Magen David Adom (MDA), Israel’s equivalent of the American Red Cross, a national ambulance, blood-services and disaster-relief organization.

One particular emergency run sticks out in her mind.

“We got a call that an 8-year-old girl was having a seizure,” explained Lewison. “I was riding alone, talking with the little girl at the same time I’m communicating vital information to the driver. It was big moment for me.”

Lewison is carrying on her commitment to MDA through a project she is organizing with the help of Ohio State’s Melton Center for Jewish Studies.

In April 2014, Lewison applied for and was selected to receive the Norbert and Gretel B. Bloch Endowed Scholarship, for deserving students who wish to create a program of Jewish interest. The scholarship, administered by the Melton Center, provides students tuition support and funding to develop, publicize and carry out a program of their choosing. Melton staff lend programmatic and academic support to scholarship recipients.

“The Melton Center is delighted to be able to support Allegra and her program on Magen David Adom,” said Matt Goldish, director of the Melton Center and the Samuel M. and Esther Melton Professor of History. “Our students have had the opportunity to run many terrific programs through the Bloch Scholarship and we are very grateful to the Bloch and Shore families who made it possible.

As for Lewison’s future plans, she may take a year off after graduation and then turn her attention to medical school.

About the Melton Center for Jewish Studies

The Samuel M. Melton Center for Jewish Studies was established at Ohio State in 1976 with a generous donation from Samuel M. Melton. The center was the first center for Jewish Studies at an American public university. The center develops, promotes and supports teaching and research in Jewish studies by faculty and students; actively encourages the study of all aspects of the Jewish experience; and sponsors educational programs that serve the public.