A distinctive feature of Ohio State’s new semester calendar is the May session, nicknamed Maymester, which was inaugurated in 2013. The four-week session encourages students to experience a class topic outside of their current educational track to expand their horizons.

The colleges of Arts and Sciences; Engineering; Education and Human Ecology; Food, Agricultural and Environmental Sciences; Nursing; Public Health; and Social Work contributed courses. May session 2014 took place from May 5-30. 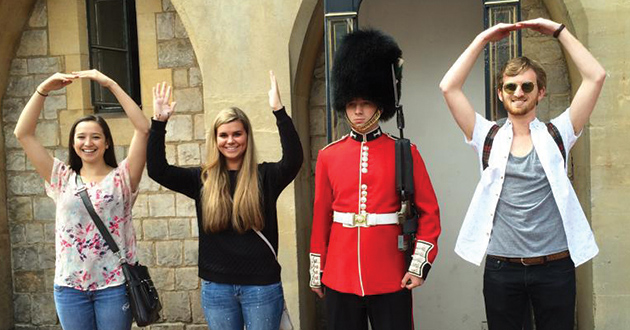 “We had a two-week ‘backstage pass’ into the history of rock and roll. I saw the places that have been cherished for the past 50 years due to their cultural significance. I walked across Abbey Road, aligning my footsteps with the 45-year-old shoe prints of The Beatles.”

So said Andrew Luft, fourth-year psychology and English major. He was one of 35 Ohio State undergraduate students enrolled in the School of Music May session course — British Invasion 2014. The course included a short-term class focused on British music of the 1960s and a study abroad trip to England.

“The 1960s was a remarkable, engaging and exciting decade that saw enormous change,” said Tim Gerber, professor in the School of Music. “We had Civil Rights, the British Invasion, Woodstock, the rise of Motown, JFK, hippies and free love.”

The course took a look at how British bands — including The Beatles, Cream and The Who — were influenced by American music styles. “African-American musicians had a huge impact on British rock and roll,” Gerber said. “Those British bands were listening to American R&B artists long before they were writing their own stuff.”

The class focused on artists and their music, lyrics, lyric analysis, songwriting processes and history. They took a trip up to Cleveland’s Rock and Roll Hall of Fame and headed out on a study abroad trip to London and Liverpool.

The general education course attracted students from such diverse areas as nursing and business, English and history. Most had never been overseas and many had never been on a plane. 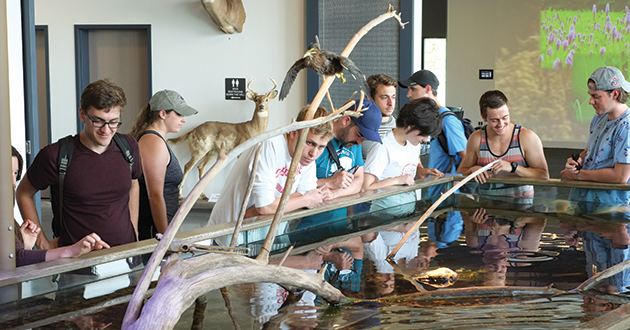 Last May, more than a dozen students took to the rivers and watersheds to learn about environmental citizenship.

Rick Livingston, associate director of Ohio State’s Humanities Institute and senior lecturer in the Department of Comparative Studies, designed the May session course, “A Place Between The Rivers: Ecological Restoration and Environmental Citizenship in Central Ohio.”

“My goal was to deepen students’ awareness and understanding of environmental citizenship by taking them beyond the classroom to witness, firsthand, environmental restoration projects along the rivers of Central Ohio — the Olentangy, the Scioto and Big Darby Creek,” said Livingston.

Students in Livingston’s class did their share of readings in environmental philosophy and ecocritical reflection, but the bulk of the class took place outdoors at projects restoring wetlands, removing dams, preserving habitat and native biodiversity and bringing back ecological keystone species, such as bison, which have been absent from Ohio for almost 200 years.

Rory O’Shaughnessy, a junior majoring in microbiology, was especially keen to get up close with river restoration projects. She is an avid rower.

“The rivers are so important to me,” said O’Shaughnessy. “Obviously, on some level, I knew that before this course. But this
class really taught me the importance of how to behave like a citizen — that it means being aware of your impact on the area around you.”

“Our corner of the world is currently being reshaped by projects both intentional and unintended,” said Livingston. “It’s critical that students develop a sense of citizenship and humanity that includes the physical world they live in.”

In his role as associate director of Ohio State’s Humanities Institute, Rick Livingston is leading the institute’s Environmental Citizenship Initiative to address the challenge of creating a culture of ecological literacy for the 21st century. The initiative brings together students, staff, faculty, researchers and community members to explore the many dimensions of environmental concern and sustainability, from climate change and biodiversity to local food systems and green cities. Committed to making the arts and humanities full partners in this transdisciplinary dialogue, the Environmental Citizenship initiative promotes innovative approaches to environmental awareness and understanding.  Current projects include “BioPresence: Bringing (Other Than Human) Animals into the Framework Plan,” a multi-media collaboration with the AWASH (Animal Worlds in the Arts, Sciences and Humanities) working group. Find out more on Twitter (@AnimalOSU), Facebook (BioPresence Animalosu) and Tumblr. 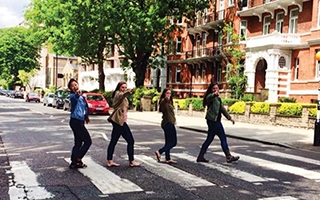