Anyone who’s spent any time on the Oval knows that the chimes of Orton Hall create the soundtrack for the Buckeye Experience. This year marks the 100th anniversary of this beloved tradition. Throughout each day, 25,000 pounds of bells chime in the key of E-flat on the quarter hour, helping all chart their course for the day. Students began signing their names on the door to the bell tower in the early 1900s and, although unauthorized, continue to do so today — names cover the brick walls inside the tower.

In 1949 the bells were renovated to chime at the quarter hour and the full Westminster Quarters melody to play at the top of the hour, as can be heard today.

Orton Hall, one of the oldest remaining buildings on campus, opened in 1893 and is named after Edward Orton who was Ohio State’s first president and a professor of geology.

From the tiles in the entrance hall to its walls and foundations, Orton is built from 40 different kinds of stone, laid in stratigraphic order according to relative positions in Ohio’s bedrock. Encircling the top of the bell tower are 24 columns with gargoyle-like figures, which feature restorations of fossil animals.

Today, Orton Hall is home to the Orton Geological Museum, the Orton Memorial Library of Geology and offices, classrooms and research labs for the School of Earth Sciences. 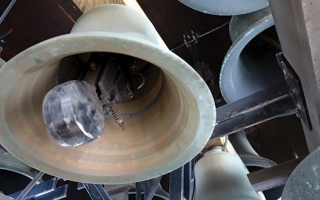