GEORGE WANG graduated Phi Beta Kappa in molecular genetics in 2003 and headed to Stanford for a PhD and a career investigating the development of the nervous system using genetics.

Several years into his doctoral work though, Wang began to look at alternative career paths.

“I went back to my days at Ohio State when I volunteered with Ohio Staters, Inc., and I thought, ‘I want to replicate that feeling again,’” said Wang.

So, shortly after he earned his PhD, Wang, along with fellow Stanford graduates Adam Kircher and Kiah Williams, co-founded SIRUM (Supporting Initiatives to Redistribute Unused Medicine), a nonprofit organization using a technology platform that allows health facilities, manufacturers, wholesalers and pharmacies to donate unused medicine rather than destroy it.

“Our mission is to reduce barriers to health for the underserved by increasing access to donated medicine. Think of us as a Match.com for unused medicine.”

“SIRUM’s technology aggregates unexpired, surplus medicine from donors and, at the same time, collects details on the needs of clinics.”

When a match is found, SIRUM’s system automatically generates shipping labels, packing slips and courier pickups, coordinating all of the donation logistics necessary to ship medicine directly from donor institutions to clinics in need.

Wang says that his experiences, as both a researcher and a volunteer at Ohio State, prepared him to tackle the task of creating a start-up company.

“One of the big projects I worked on as a member of Ohio Staters, Inc., was the creation of the University Museum [still in University Hall today]. I loved all of the aspects of that service project: designing, researching, testing and then launching the final product — that was my idea of a social scene.”

“When you are doing research, you’re trying to do something that no one has done before,” said Wang. “It’s the same thing when you’re launching a start-up company. You have an idea, you test your idea, you refine your idea, you go through starts and stops and then it hopefully comes together.”

To date, SIRUM has redistributed one million pills, which have benefited approximately 20,000 low-income patients.

“Our goal,” said Wang, “is to get medications to all 50 million Americans who currently skip their prescriptions due to costs. We want to make a difference in their lives.”

You can listen to an interview with George Wang on NPR’s Marketplace at go.osu.edu/sirum.

A Hard Pill to Swallow 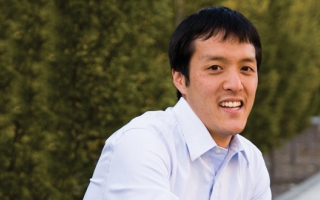