Researching the Sounds of Music

When you think of Ohio State as a top-tier research institution, you might think of its state-of-the-art medical research. Scientific investigations. Engineering explorations. Arctic climate research.
But music research?

Yes — Ohio State has a robust research program in music.

“We take our music research very seriously,” said DAVID HURON, Arts and Humanities Distinguished Professor of Music and a member of Ohio State’s Center for Cognitive and Brain Sciences. He is one of a growing number of music scholars in the field of music cognition, which attempts to answer questions related to the experience of music.

Huron, who has traveled the world studying people’s reactions to music, has delivered nearly 400 lectures in 24 countries. His research focus is on music and emotion.

One of his recent studies delves into the phenomenon of music and sadness. “It’s a curious problem,” he said. “Why would people intentionally seek out music that makes them sad? It’s kind of a paradox — if you’re feeling sad, why would you want to listen to music that makes you sadder? But 50 percent of the population would say that they like listening to sad music.” 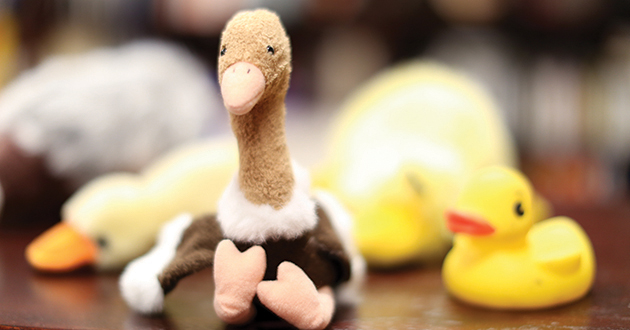 Some of the “squeaky toys” used in David Huron's cute-sound research.

Another study, carried out by postdoctoral researcher DAN SHANAHAN, examined the “pace of life” phenomenon reflected in music. This project compared people in urban environments with a faster pace of life, where they talk faster and walk faster, with people in rural areas with a slower pace of life. Sure enough, with the help of music streaming company data that correlated millions of music choices with geographic information, people in more urban areas chose faster-paced music compared with their rural comrades.

One of Huron’s most interesting recent studies, with doctoral researcher JOE PLAZAK, asked the question­, “What makes a sound cute?”

“We went out and bought a whole bunch of squeaky toys. We had people listen to a range of sounds – from the squeeze toys and music boxes to tuning forks, animal calls, electrical appliances and more. Listeners had no difficulty identifying the sounds that are cute.”

Huron took the sounds “apart” to determine where the cuteness comes from. He deducted that the cutest of the sound resonators were around 20 ml in volume — cute sounds apparently arise when a small resonant cavity is activated using a small amount of energy through a small aperture (think of a dog’s squeaky toy).

Interestingly, a baby’s vocal tract is similar to the 20 ml volume compared to a much larger volume in adults. “When an infant gurgles and coos, we agree that the sound is cute,” he said, “and that evokes nurturing and protective parenting behaviors.”

Huron’s studies are ongoing, and he sometimes collaborates with the Wexner Medical Center to gauge humans’ reactions to music.

Huron came to Ohio State in 1998, but the university has a long history in the psychological study of music, which has continued virtually non-stop since the 1920s. The School of Music holds a preeminent worldwide reputation in music cognition; at a recent international conference in Greece, Ohio State-affiliated researchers, including faculty, alumni and current students, made a whopping 24 presentations.

To support the musicology program at Ohio State, visit go.osu.edu/give-asc {#643468}. 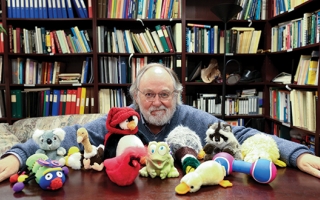