The College of Arts and Sciences is a powerful force for positive change. In the arts, in the humanities, in the sciences — scholarship, research and teaching is underway that is changing how we see and interact in the world and changing the world itself. We are among Ohio State’s leaders in gaining research support from state and federal agencies, business and industry and receiving top scholarly awards, honors and recognition for work that has had significant impact.

This winter, Chemist HANNAH SHAFAAT (pictured at right), mathematician DANIEL THOMPSON and mathematician/computer scientist ANASTASIOS (TASOS) SIDIROPOULOS learned they would receive NSF CAREER Awards — the top award given by the National Science Foundation to support the work of the nation’s most promising junior researchers. Selection means you exemplify exceptional research, teaching excellence and commitment to integrate teaching with research.

Shafaat wants to harness advantages of bioinorganic platforms to get molecular-level insight into mechanisms of catalysis to guide design of increasingly efficient and robust catalysts for application.

“We want to make hydrogen from water,” Shafaat said. “If we can see how it is produced in nature and figure out the mechanisms involved, we can build catalysts of our own.”

“Many researchers are making molecules right now, but we are taking a new approach to understand how it works on a detailed molecular level. Protons are so small, it is difficult to ‘see’ them. But if we can see how these processes happen, we can make it better.”

To do that, she has set up a new laser system to help her group get a better look at the proteins that are catalysts for hydrogen production. 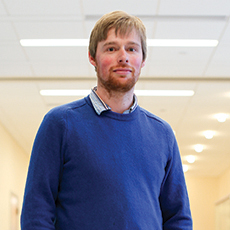 THOMPSON’S five-year, $445,000 award funds his core research program in pure mathematics and allows him to develop connections to the applied setting of bioinformatics.

Thompson said, “I’m always looking to relate my work to other areas. The grant allows me to work in the applied setting of bioinformatics at the NSF-funded Mathematical Biosciences Institute, where I can bring my training in pure math to bear on interpreting complexity and say something real about issues in bioinformatics. The connection is that a big complicated data set can look quite a lot like a chaotic dynamical system.

“The thing about basic research is that you are developing this foundation, building this world, and you’re free from worrying too much about anything practical, and then you hear about problems in biology dealing with big data sets and you realize that you have all these tools from the pure theory that can be adapted to measure those complexities.” 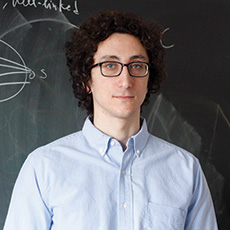 As the ability to collect massive, multifaceted, and sometimes seemingly unrelated, amounts of data has accelerated, the need for mathematicians who can wrangle them into relevant bits that can be extracted, managed and applied — and do it quickly and efficiently — has accelerated in tandem.

“Being able to extract meaningful information from the abundance of raw inputs is often a major computational challenge,” Sidiropoulos said.

“We know that somewhere in there lies any answer that we care to extract — eventually. The key is being able to do it quickly and efficiently. But in many complex systems there are no simple underlying rules for extracting information efficiently.”

“Geometrical methods have become an indispensable tool because data sets endowed with pairwise similarities can be interpreted as a geometric space.”

The American Astronomical Society awarded DAVID H. WEINBERG, Henry L. Cox Professor in Astronomy and Distinguished Professor of Mathematical and Physical Sciences, the Lancelot M. Berkeley New York Community Trust Prize for Meritorious Work in Astronomy. Weinberg was honored for leading contributions to SDSS-III, the third phase of the Sloan Digital Sky Survey, which has made dramatic advances in measuring the structure of the Milky Way and the history of the accelerating expansion of the universe.

This fellowship supports a partnership between Ohio State and five Ohio liberal arts colleges — Denison, Kenyon, Oberlin, Ohio Wesleyan and the College of Wooster — giving recent Ohio State language PhDs an opportunity to teach and do research at one of these exceptional colleges.

JOSHUA KERTZER (PhD, political science, 2013) was awarded the nation’s highest honor for doctoral dissertations for “Resolve in International Politics,” which was selected from 71 nominees representing 25 disciplines in the social sciences. Kertzer currently is assistant professor of government at Harvard University, where he specializes in the intersection of international security, foreign policy, political psychology, and quantitative and experimental methods.

Five-Year $2.6M NIH Grant Changes How Spanish For the Health Professions is Taught 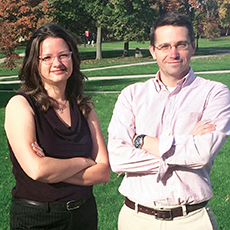 ANN COOK and DEREK SAWYER are part of a massive project analyzing deposits of frozen methane under the Gulf of Mexico. Methane hydrate, found in abundance beneath the ocean floor and under Arctic permafrost, has enormous potential to increase the world’s energy supply. 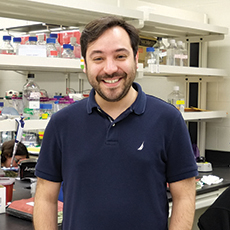 Biochemist MARCOS SOTOMAYOR is one of a select group of 126 scholars from top institutions in the United States and Canada named 2015 Sloan Fellows. The two-year, $50,000 Sloan Research Fellowships have been awarded annually since 1955 to promising early-career scientists and scholars to recognize achievement to-date and potential for significant future work.

Sotomayor’s research combines X-ray crystallography and molecular dynamics simulations to study the proteins that mediate our senses of hearing and balance.

“We use our inner ear in everyday life, all the time, not only to hear the world around us, but to detect motion of our head, to maintain our gaze and to discern up from down. Could you imagine going around the world without the senses of hearing and balance?”

Sotomayor and his seven undergraduate students, six graduate students and two postdocs are learning how these biological processes work at a fundamental, molecular level.

Combining X-ray crystallography, biochemical experiments and molecular dynamics simulations gives them a “magnifying glass” that lets them “see” these proteins in action at atomic resolution. The tools also let them look at adhesion proteins involved in the wiring of neurons in the brain or those implicated in cancer. 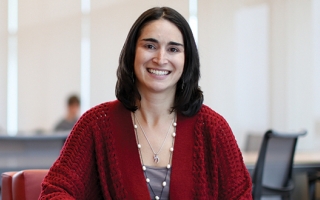