In 1945, DONALD DUNN was awarded the Silver Star for “conspicuous gallantry and intrepidity in action” against the enemy while serving with the 10th Mountain Division during World War II. It’s not something that Dunn talks about without prompting, but he does wear a Silver Star pin on his lapel. That pin launched the beginning of many conversations and a lasting friendship with Peter Mansoor, associate professor and General Raymond E. Mason, Jr. Chair in Military History.

Dunn (pictured, right at the Florence American Cemetery and Memorial, Italy) first met Mansoor over lunch at the Faculty Club several years ago. Mansoor noticed the pin and learned that Dunn had traveled to Italy to try and locate the battlefield where he earned his Silver Star but was unable to do so.

Mansoor then went to Washington D.C., to scour the archives to locate Dunn’s unit.

“It was part luck, part skill, but I found a treasure trove of documents about Donald’s unit — maps, combat diaries, after-action reports and overlays,” said Mansoor. 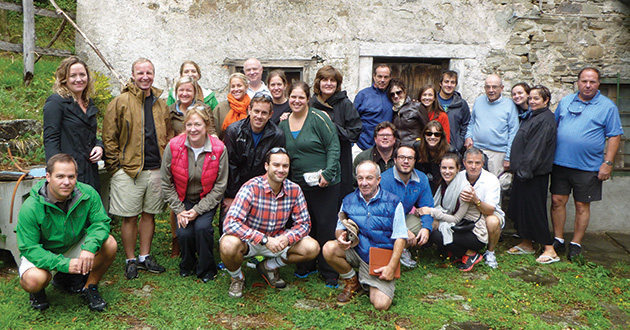 With that information in hand, Mansoor traced the route of Dunn’s company, from the time he got to Italy all the way through to the time Dunn was wounded, on Hill 775. Mansoor and Dunn then traveled to Italy twice; once in 2011 with a small group of friends and again in 2012, with Dunn’s children and grandchildren.

“It was quite a moment in my life,” said Dunn. “It will stay with me until my last breath.”

“Millions are impacted by war and we need to know how in order to move civilization forward,” said Dunn.

In 2013, Dunn’s family established THE DONALD G. AND MARY A. DUNN CHAIR IN MODERN MILITARY HISTORY, honoring Dunn’s service and the memory of their mother as well.

Andy Dunn, Donald Dunn’s son, accompanied his father on the family trip to Italy and said that the experience opened his eyes to the importance of preserving and retelling history.

“My family established the chair so that generations of students could study the causes and nature of war. Perhaps the knowledge from such study might be a factor in the promotion of peace.”

“I feel so good about this gift,” said Dunn. “What could be more significant to the study of world history than the history of wars? The aspects of war, how we humans get into them, the good as well as the mistakes, we need to study all of it so that maybe the world, going forward, will be stronger.”

According to Mansoor, most universities don’t have a single military historian on their faculty. At Ohio State, there are several; two of them hold endowed chairs.

“The gift that Donald’s family made in establishing a chair in military history has established the Department of History as the top in the nation, and arguably in the world, in the field,” said Mansoor. “This is a gift that will reverberate down the generations, as students come and learn all of the aspects of what has shaped mankind. You cannot ignore the impact of war and warfare on the development of civilization, for better or worse.”

Bruno Cabanes is the Donald G. and Mary A. Dunn Chair in Modern Military History. For the past 15 years, Cabanes has studied the transition from war to peace in the 20th century, with a focus on the aftermath of World War I. Prior to coming to Ohio State, he taught for nine years at Yale University.

“Thanks to the tremendous generosity of the Dunn family, I plan to build a strong research program, with my colleagues and our graduate students, on postwar transitions. Teaching the transition from war to peace can get really interactive in a university like Ohio State, where roughly 1,500 veterans are on campus,” said Cabanes.

Although he did not graduate from Ohio State, Dunn considers himself a Buckeye at heart.

Watch Colonel Mansoor’s conversation with Donald about the Climb to Glory, visiting Italy with his family and the impact of the Donald G. and Mary A. Dunn Chair in Military History on the military history program at Ohio State. 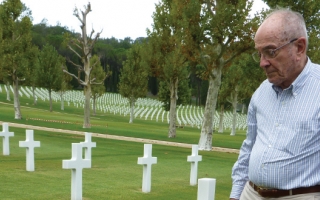