“I need to continue building my empire because I want to address major social issues through philanthropy.”

It’s not very often that we feature an alumna who hasn’t actually graduated – but TANISHA ROBINSON, 33, is an extraordinary individual — or a “unicorn” as she says.

“I’m a young, black, female entrepreneur, who is out — I’m sort of hyper marginalized,” said Robinson. “I’m two science classes short of my bachelor’s degree, but I’m too busy right now to think about it. I have an empire to build.”

Robinson, who recently has been featured by Huffington Post and Fast Company, is the co-founder of Print Syndicate, Inc., a rapidly expanding online retail business launched in November 2012. Print Syndicate earned $4 million in 2013, $12 million in 2014, is currently valued at $20 million and is on track to grow to upwards of $100 million in the next few years.

“I spoke at an event recently and asked the crowd, ‘How many of you want to change the world for the better?’ Nearly everybody raised their hands. Then, I asked, ‘How many of you want to be really rich?’ Hardly anyone raised their hands. I said, ‘I do! Money is a lever for change. Bill Gates is able to address global infant mortality rates because he’s a billionaire.’

“I need to continue building my empire because I want to address major social issues through philanthropy. Last year our staff gave 1,000 hours of service on company time. Next year our goal is 2,000.”

With workers at a new warehouse in nearby Grandview Heights and in their main offices in downtown Columbus, they’re up to more than 100 since their November 2012 launch started with just four employees.

They have 16,000 feet of office space at the corner of State and High Street facing the Ohio Statehouse.

“Our mission is ‘to enable self-expression through exceptional design.’ We’re always working to be super-relevant. We keep our eye on the news and social media and create goods and items that help people express themselves. A big part of our business model is technology-based.

“We’re going to be launching another brand soon, Craftpride, that focuses on knitting, cross stitch, crochet. People love to display their interests and express themselves in unique ways.

“We have a team of content designers, graphic designers, web coders and product photographers in the office and then people in the warehouse,” she said. “I’m a big believer in fair wages, so we pay all of our workers a livable wage and provide affordable health care.

“Columbus is ideal because of its central location and availability of skilled creatives (artists, designers and writers) because of Ohio State and the Columbus College of Art and Design.”

Not a Straight Path

Starting out in Liberty, Missouri, “the evangelical Bible belt,” in a conservative Mormon family, Robinson felt that there was really nothing there for her.

Her path to Ohio State was not a linear one; after Missouri, she attended Brigham Young University in Utah before joining the U.S. Army.

“It might sound funny, but actually joining the Army was less conservative than my life up to that point,” she said. “My parents were very devout and women were raised to be wives and mothers. But growing up like I did, and then being in the Army, gave me a strong work ethic, a commitment to service and the capacity for discipline.”

In the Army, she learned Arabic at the Defense Language Institute in California and later became a translator in Syria.

“I can’t sing or play music and I’m not artistic, but languages just come to me,” she said. “I speak Arabic, German, Spanish and English.

“When I was kicked out of the Army for being gay, I decided to go back to school. When I was at the Defense Language Institute, I met Mahdi Alosh, the previous chair of Near Eastern Languages and Cultures. I got into Ohio State and Georgetown but chose Ohio State.

“In 2007, I received the Huntington Fellowship at Ohio State and went to study in Damascus and when the fellowship was over, I didn’t come back. I stayed in Syria and taught English. I traveled; I worked on women’s rights and I explored the Mediterranean.”

“I came back to Columbus though. This is a great city with a lot of opportunity. It was the first time I felt like there were no consequences for just being me.”

To support the Department of Near Eastern Languages and Cultures, visit go.osu.edu/give-asc {#307883}. 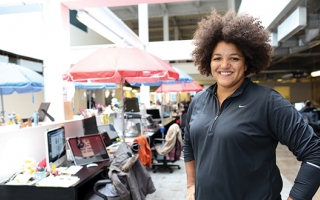