Transformational Investments: The Importance of Endowments in Arts and Sciences

Endowments allow donors to establish an enduring legacy that reflects their values; build a lasting relationship with faculty and staff working to become the best in the country in teaching, research and service; and transform the student experience in ways that have lasting and rippling effects far into the future.

“In the College of Arts and Sciences, there is one vision: to be the best arts and sciences college in the country. The greatest institutions have the best minds, the most-innovative researchers and inspiring teachers. That is what these chairs and professorships are all about.”

On Oct. 15, 2014, the College of Arts and Sciences hosted its inaugural Honoring Excellence ceremony to recognize endowed chairs and professors and donors whose transformational investment in the college has enabled our faculty to achieve a nationally recognized level of excellence.

At the ceremony, SKYLER CRANMER, the Carter Phillips and Sue Henry Associate Professor of Political Science, spoke of the transforming nature of an endowment.

“Why I’m at Ohio State has a lot to do with Carter Phillips and Sue Henry,” said Cranmer. “Their gift has given me the freedom to do political science, not within a narrow disciplinary boundary, but to follow the most interesting, the most relevant and the hardest problems, wherever they present themselves.“

Cranmer specializes in network science. He joined Ohio State from the University of North Carolina at Chapel Hill. He earned a BA in criminal justice and a MA in international relations from San Francisco State and then received his second master’s and PhD in political science at the University of California, Davis.

“During the three years before I graduated from Ohio State, I had the opportunity to work with extraordinary political scientists, which, when coupled with my classroom studies, prepared me for the rest of my professional life,” Phillips explained. “It’s hard to imagine a better gift that I could give an institution that gave so much to me and contributed so much to my professional success.”

“My perspective on philanthropic investment is summarized in the words of Maya Angelou: ‘When you learn, teach. When you get, give.’”

JOHN REEVE has held the Rod Sharp Professorship in Microbiology since 1999. Well known as the discoverer of archaea histones, small DNA-binding proteins that are the precursors of histones in eukaryotes, Reeve has witnessed firsthand the long-term impact of an endowment on graduate training and research capacity.

“Rod Sharp’s endowment has helped promote, expand and diversify graduate education and research in the Department of Microbiology and allowed me to pursue intriguing novel observations and investigate unusual microorganisms,” said Reeve.

W. RODNEY SHARP, co-founder, DNA Plant Technology Corporation and former professor of microbiology at Ohio State, believes that an endowment is the best way to maintain a valued relationship with the university.

“The endowed professorship has provided an opportunity to express my appreciation for 60 years of continuous collaboration with Ohio State, beginning with three years of undergraduate studies, a professorship, advisory roles and, more recently, service on the Arts and Sciences Dean’s Advisory Council,” said Sharp.

History Professor BRUNO CABANES (pictured above, right) is bringing more than 15 years of scholarly work on the transition from war to peace in the 20th century to Ohio State students thanks to the new Donald G. Dunn and Mary A. Dunn Chair in Modern Military History.

“Ohio State is well known for its long tradition of excellence in military history. Because of Donald Dunn’s tremendous generosity, I plan to build a strong research program, with my colleagues and our graduate students, on postwar transitions.”

Read more about the Dunn Family’s legacy of giving. 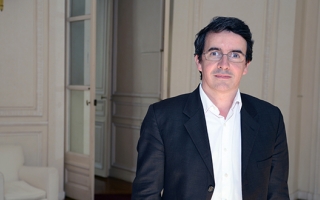