The words and works of William Shakespeare have inspired people for centuries. More recently, Ohio State has used his texts as a social and interpersonal intervention — helping children with autism and military veterans transitioning back into civilian life — as well as bringing Shakespeare’s words to thousands of Ohio schoolchildren. Ohio State’s Department of Theatre has been closely involved with all of these endeavors, employing Shakespeare’s texts to cope, socialize, communicate and learn.

A recently completed study, 400 years in the making, demonstrated marked improvement in the social and communication skills of children with autism spectrum disorder (ASD). The endeavor, the result of a collaboration between the Department of Theatre and the Nisonger Center at the Wexner Medical Center, used a signature approach pairing the recitation of Shakespeare’s rhythmic language with physical gestures. 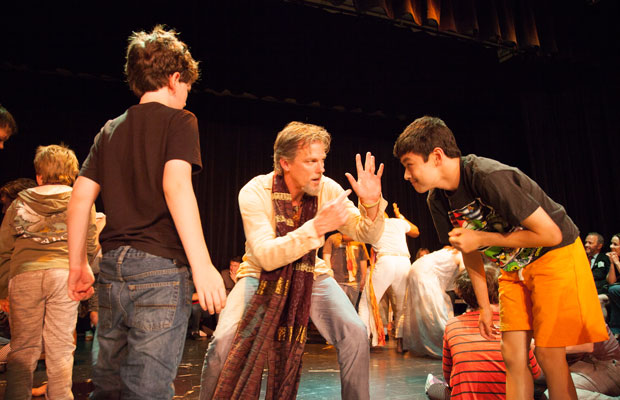 In the workshops, facilitators lead children through a series of games based on the plot of The Tempest. Their aim is to improve the social and communication skills of children with autism spectrum disorder, using a signature approach of pairing the recitation of Shakespeare’s rhythmic language with physical gestures.

Results of the study were published in the journal Research and Practice in Intellectual and Developmental Disabilities, showing better language skills and recognition of facial expressions in children with ASD. Fourteen children took part in the intervention, which included twice-a-week workshops for 10 weeks, led by Ohio State theatre students.

The successful research results came as no surprise to Kevin McClatchy, assistant professor of theatre, who directs the Shakespeare and Autism program.

“The project is a unique collaboration between the arts and the sciences. It uncovers the effectiveness of playing games based on the works of Shakespeare to confront the communicative blocks facing children with autism,” said McClatchy.

The program is based on an intervention known as the Hunter Heartbeat Method, created by Kelly Hunter, an actress who has worked with the Royal Shakespeare Company. She worked with McClatchy, the theatre students and researchers Marc J. Tasse, professor of psychology and psychiatry and director of the Nisonger Center, and doctoral student Margaret Mehling.

“There’s this ‘armor’ that they have. But over the course of an hourlong workshop with every child, you start to see the armor fall away. It’s amazing. This is what art is supposed to be — what it can do and should do.”

During the workshops, facilitators lead the children through a series of games based on the plot of The Tempest and focusing on skills such as facial-emotion recognition, eye contact, gross motor imitation, affective imitation, pragmatics of dialogue exchange, personal space, turn taking, affective expression, humor and social improvisation, while using the rhythmic Hunter Heartbeat Method.

Researchers describe the initial results of the study so far and share hopes for the program’s future.

Patricia Heaton, actress and Ohio State theatre alumna, known for her roles on Everybody Loves Raymond and The Middle, made a generous gift to support the program through the Patricia Heaton-Hunt and David Hunt Shakespeare and Autism Fund.

Heaton and her husband joined the Ohio State researchers and theatre leaders last summer when their funds made a workshop and performance possible at The Help Group in Los Angeles; the nonprofit organization serves children, adolescents and young adults with autism and other special needs. Ohio State participants and Kelly Hunter led 15 local children from The Help Group’s Bridgeport School in an interactive performance of The Tempest.

During a visit to Ohio State last fall, Heaton talked about the experience. “I support the Shakespeare and Autism project, and I think the success of this program clearly shows us that the arts are very worth funding,” she said. “The arts are essential to our well-being — for our mental health, for our spiritual health, for our emotional health.”

McClatchy and the theatre students continued to conduct workshops with children at the Nisonger Center this spring.

Shakespeare in the Schools

Through an unprecedented seven-year partnership, Ohio State and Great Britain’s Royal Shakespeare Company (RSC) brought Shakespeare to schoolchildren and their teachers across Ohio and supported international touring productions by the RSC to cities across the U.S. This collaboration has had a profound impact on the educational experiences of children in Ohio.

The partnership between the Royal Shakespeare Company and Ohio State was administered through the Arts Initiative in the College of Arts and Sciences. The partnership involved university faculty, students and staff – including MFA acting students from the Department of Theatre. They were closely involved with the more than 100 Ohio K-12 schoolteachers who were trained in the RSC’s Stand Up for Shakespeare program, which focused on active teaching approaches drawn from RSC rehearsal rooms. In turn, the program affected more than 15,000 Ohio schoolchildren in classrooms and at Shakespeare festivals. 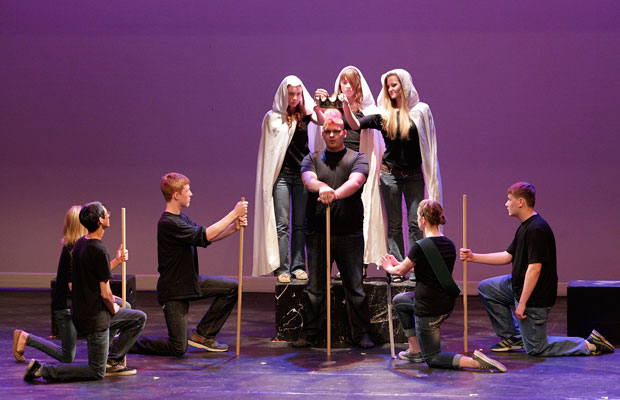 Ohio schoolchildren perform Macbeth (above), just one of the Shakespeare plays explored by nearly 200 young actors in grades 3-12 in a Stand Up for Shakespeare Festival.

Because of these approaches, 71 percent of children in the program said “Shakespeare is not hard to understand.” Related studies showed a reversal in a longstanding trend of growing dissatisfaction with reading and a long-held assumption that Shakespeare was no longer relevant to young people.

“It is unbelievably amazing as I watch students — who consider school to be extremely hard —work with Shakespeare’s text and understand it. They beg to do Shakespeare! How many times does a teacher get to hear that.”

The Ohio State/RSC partnership brought four RSC Shakespeare performances geared to younger audiences to Ohio, touring to schools around the state and reaching thousands of schoolchildren, as well as bringing RSC directors to the Department of Theatre for guest residencies. The program was made possible by a lead gift from the Abigail and Les Wexner Family Foundation, with additional support from organizations and individuals in Ohio and New York.

The Department of Theatre is embarking on a new program to use Shakespeare to help military personnel, veterans and military family members find new ways to process, understand and give expression to their experiences as they navigate the transition from soldier to civilian.

“Our goal is to build a safe and creative space where participants can find new ways of expressing themselves and develop new frames of reference for what they’ve experienced,” said Assistant Professor Kevin McClatchy. “Through a series of workshops, we will create invaluable opportunities for these individuals to explore their challenges and triumphs in a safe and playful atmosphere.”

McClatchy explained that theatre’s nine Master of Fine Arts actors will conduct the workshops. One set will be for veterans and military personnel; another set will be for families and caregivers. The group is working closely with the Chalmers P. Wylie VA Center in Columbus; counselors from there will be on hand for all events.

“Theatre is an amazing art form because anyone can relate to it, and it has meaning in the moment,” said Linnea Bond, an MFA acting student. “It’s incredibly powerful; you can’t be neutral or removed. So I’m excited to use theatre activities with veterans because it can help walls come down and let people really relate to those around them.”

“This outreach project will take full advantage of our students’ unique blend of training, talent and experiences to construct these original workshops to engage veterans,” McClatchy added. “Our acting students are genuinely breaking new ground in providing space and opportunity for these groups to be heard, to tell their stories and to witness the stories of others.”

Workshop participants include three Vietnam veterans and 10 active duty and post-9/11 conflict veterans, along with families and caregivers. In addition to partnering with the VA Center, he said the theatre team is working with the Whetstone Community Center, where workshops will take place; the Ohio National Guard; Blue Star Mothers; and Ohio State’s student veterans organization, Vets4Vets.

Workshops will take place throughout spring semester, and will result in a new piece of theatre devised by the MFA students based on the veterans’ experiences. “Ultimately, through the act of creative artistry, we aim to bridge the military-civilian divide,” said McClatchy.

“Shakespeare’s works are unique because he was obsessed with exploring and communicating what it feels like to be fully alive.” 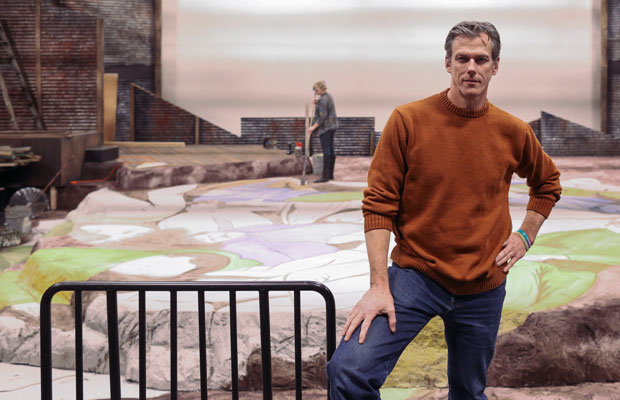 Theatre Assistant Professor Kevin McClatchy believes it is that obsession, expressed in brilliant language written in the rhythm of the heartbeat, that makes Shakespeare’s work timeless and able to help those facing challenges with communicating their own experiences of being alive. The heartbeat rhythm is familiar and physical and allows for opportunities in a visceral way to reconnect mind and body. McClatchy oversees the acting curriculum and directs both the Shakespeare and Autism program and the new Shakespeare endeavor with veterans. 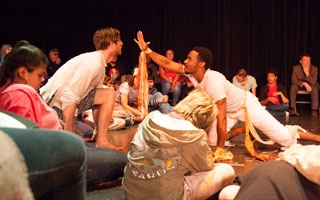