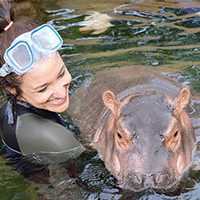 In her role, Angela handles everything from day-to-day social media, to media relations and website blog posts. On a typical day, you’ll find her running around the zoo, taking photos of all the animals to share with the masses, and always making time to visit the elephants — her favorite animal. “I’m so thankful for the education I received from the School of Communication. I wouldn’t be here today, with my dream job at the Cincinnati Zoo, without it.”

On Jan. 24, 2017, Fiona the baby hippo was born six weeks before her due date. Though the zoo was prepared for her birth, they were not ready for her to be born prematurely at 29 pounds — half the normal birth weight for a hippo. With help from Cincinnati’s Children’s Hospital, keepers were able to nurse Fiona back to health, and Angela and her team were with them every step of the way, posting updates daily on the zoo’s blog. Read more > 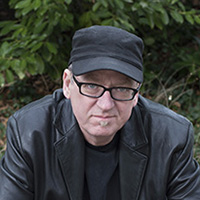 When award-winning cartoonist and Ohio State alum John “Derf” Backderf created "My Friend Dahmer," a graphic novel that explores his high school acquaintanceship with serial killer Jeffrey Dahmer, he couldn't have predicted the success of the 2017 film adaptation. The success of both the graphic novel and film — the book was selected by Time Magazine as one of the best nonfiction books of 2012, and the film racked up laudatory notices from the likes of Village Voice and Variety — solidifies Backderf’s place in Ohio State’s rich legacy of cartoonists and comics artists, which includes such legends as Milton Caniff, Jeff Smith and James Thurber.

Like those iconic creators, Backderf says that Ohio State — especially his time at The Lantern — had a potent influence on both his personal and professional trajectories. Not only did he meet his wife in the newsroom, he worked as a political and spot cartoonist, churning out upward of six or seven cartoons a week, a volume of work about which he says, “I can’t believe I was that productive! Fueled by youth.” Read more > 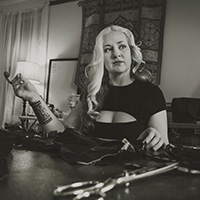 When Larissa Boiwka was an anthropology undergraduate at Ohio State studying ancient cultures, she never imagined where her degree would take her after graduation. After taking classes on witchcraft, archaeology and tribal cultures, Boiwka traveled extensively, tracking the sites she learned about in her classes. Boiwka’s adventurous nature lends itself well to life as an entrepreneur. Her bespoke corsetry business, “Wilde Hunt Corsetry,” formed serendipitously after she made a corset for herself for a Halloween costume. Under the Wilde Hunt Corsetry label, Boiwka creates custom leather corsets, often using historical beading and embroidery techniques and incorporating inspiration from the ancient cultures she studied in school.

Boiwka, who is an entirely self-taught designer, credits the education she received from Ohio State's Department of Anthropology with setting her up for success as an artist and small-business owner. “The things I read about, the cultural sites I visited and the relationships I formed as a result of my education at Ohio State still inform my work as an artist today,” she said. In addition to creating custom corsets for clients worldwide, Boiwka’s creations have also captured the attention of television and music producers. She has created pieces for music videos and, most recently, the PBS Civil War drama "Mercy Street," which premiered in 2016, starring Josh Radnor. Read more >

For more information about how to get involved with the Arts and Sciences Center for Career and Professional Success, please email or call Randy Dineen (614-688-4522). Arts and Sciences alumni are encouraged to visit the College of Arts and Sciences' Volunteer Match website to find volunteer opportunities from our Center and from departments across the college and to join Alumnifire, an online professional networking and mentoring tool for Ohio State alumni, students and staff.