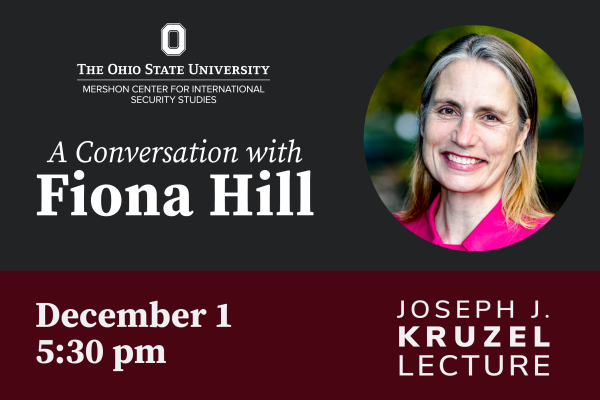 Fiona Hill visits the Mershon Center for a conversation on the latest developments in the war on Ukraine and their implications for world affairs. Hill is the Robert Bosch Senior Fellow at the Center on the United States and Europe in the Foreign Policy program at the Brookings Institution. She served as deputy assistant to the president and senior director for European and Russian affairs on the National Security Council from 2017 to 2019. From 2006 to 2009, she served as national intelligence officer for Russia and Eurasia at the National Intelligence Council. She has researched and published extensively on issues related to Russia, the Caucasus, Central Asia, regional conflicts, energy, and strategic issues. Most recently, she is author of “There Is Nothing for You Here: Finding Opportunity in the 21st Century” (Mariner Books, 2021) and co-author of “Mr. Putin: Operative in the Kremlin” (Brookings Institution Press, 2015). She holds a master’s degree in Soviet studies and a doctorate in history from Harvard University and a master’s in Russian and modern history from St. Andrews University in Scotland. She also has pursued studies at Moscow’s Maurice Thorez Institute of Foreign Languages. Hill is a member of the Council on Foreign Relations.

Each year the Mershon Center for International Security Studies selects a lecturer to honor the memory of Joseph J. Kruzel, an Ohio State faculty member in political science who served in the U.S. Air Force as well as other posts in the federal government. Kruzel was killed in Sarajevo, Bosnia, in 1995 while serving as deputy assistant secretary of defense for European and NATO affairs.