University Hall (commonly known as U Hall) was originally built in 1874. It was demolished in 1971. A new University Hall was constructed in 1976; almost an exact copy on the outside, but completely modern on the inside.

Much of the university’s history can be found in the University Museum on the first floor. The museum holds answers to all kinds of Ohio State-related questions — from how Brutus Buckeye got his name to what life was like for undergraduates back in the early 1900s. The museum is open every day for students and visitors.

The Department of Women’s, Gender and Sexuality Studies is located on the second floor. The department just celebrated its 40th anniversary of women’s programming at Ohio State!

Thinking about graduate school after you earn your undergraduate degree? Counselors in the university’s Graduate School, located on the second floor can help you through the decision process (whether it’s Ohio State or another college or university you are thinking about).

Located on the third floor of University Hall is the Department of Philosophy. The department is home to the Ohio State Center for Ethics and Human Values and several student organizations including the Philosophy of Mind Group, the WiPhi Reading Group; and Consilience: The CCBS Student Organization Reading Group. 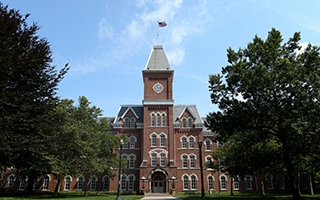