Arts and Sciences alumni pay forward by giving back

Buckeyes give back — to the university, to their communities and across the world. Three Arts and Sciences alumni are doing just that by helping those suffering from hearing loss from the ongoing airstrikes in Syria, rebuilding New Orleans after Hurricane Katrina struck and providing medical services to those in need in Haiti. 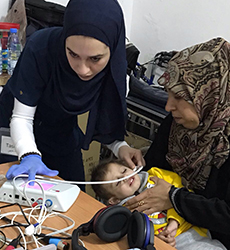 Airstrikes deliberately targeting Syrian civilians have led to unprecedented rates of hearing loss among child refugees. While there are a number of nongovernmental organizations and humanitarian aid organizations on the ground providing food, clothing, water and crucial medical assistance, audiological care is not a priority. Without it, however, children will suffer delays in language, communication and academic development.

Tasnim Hamza, a recent graduate of the doctor of audiology program in the Department of Speech and Hearing Science, was born in the United States. Her parents are Syrian, and she has relatives who live in Aleppo, a city in northern Syria.

“I’ve always known that I wanted to go into a humanitarian profession focused on improving the quality of life of people,” said Hamza. “I want to use the skill set that my education at Ohio State has given me to help people who have been displaced from their homes by war.”

As fate would have it, Hamza received an email from a friend asking her to join a humanitarian aid trip to refugee camps in Lebanon. Without hesitation, she signed on as the audiology coordinator and the only student-member of the world’s first deaf-led humanitarian aid mission, sponsored by Deaf Planet Soul, a Chicago-based nonprofit providing resources and support for the deaf community.

In March 2017, Hamza and the team of audiologists and therapists from Deaf Planet Soul arrived on the ground in Lebanon. For 10 days, they moved from camp to camp setting up makeshift diagnostic stations, dispensing hearing aids, teaching sign language and providing mental health therapy to Syrian refugee children and their parents.

Because this was the first humanitarian group to offer audiological care in the camps, no one knew for sure what to expect in terms of numbers and demand.

“You can never really prepare yourself for what you’ll see,” Hamza said. “Every morning, we were met with overwhelming need. Hundreds of children and their parents lined up, desperate for help.”

Hamza and the team began their days at 6 a.m. and worked 12- or 13-hour shifts. For most of the children, it was the first time they had sat down with therapists and audiologists for treatment. The team brought 130 hearing aids to disperse, but the demand far exceeded that, and the team made the difficult decision to give each child only one rather than two, to help as many as they could.

At least 50 percent of the children were profoundly hearing impaired or deaf. For these children, hearing aids were of no help. Hamza and others had to teach them — and their parents — enough basic sign language to survive. Hamza, who is fluent in Arabic, didn’t learn sign language until she boarded the plane to Lebanon.

“We needed to give these children and their parents a means to communicate,” Hamza said. “Without language or hearing aids, they would continue to live in isolation, and many would be ostracized.”

At the end of the trip, the team had provided services and support to nearly 300 children. “We barely scratched the surface,” she said. “There are thousands of kids on the waitlist for future trips.”

According to Gail Whitelaw, director of Ohio State’s Speech-Language-Hearing Clinic and an audiologist herself, the humanitarian work that Hamza has undertaken is exactly the type of outreach that Ohio State audiology strives to have in the world.

“We prepare our audiologists to provide the highest quality of care for those in need of our services, whether across the street or across the world.” 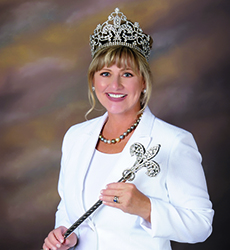 From using her public relations firm to aid in the repopulation of a parish devastated by Hurricane Katrina to being crowned goddess of the largest all-female Mardi Gras krewe, Karen Boudrie Greig’s connection to the Big Easy has blossomed quickly.

In August of 2005, the dynamic and character of New Orleans changed forever when Hurricane Katrina slammed into the coasts of Louisiana and Mississippi. Neighborhoods were flooded. Buildings were destroyed. There were people who were trapped, scared and alone.

In the New Orleans suburb of Kenner, Greig was in the middle of it all. “Half of that city was basically underwater,” she said. “I was embedded within a bunch of emergency crews and the public works and Homeland Security folks. We were all together making decisions on how we were going to handle things.”

The chaos and tragedy of that fateful summer left deep scars that are still felt to this day. Though New Orleans has managed to emerge from the ashes galvanized and united, communities in and around southeastern Louisiana are still impacted by the storm 13 years ago.

And Greig remains immersed in the effort to restore and rebuild. St. Bernard Parish — which is situated on the shore of the Gulf of Mexico on New Orleans’ southeast side — was obliterated. A 25-foot storm surge created by Katrina destroyed levees protecting the parish from the sea, leaving almost the entire community flooded.

Today, much of St. Bernard’s infrastructure has been rebuilt, and the community has gone from recovery mode to redevelopment mode. Sold on St. Bernard is a program dedicated to moving folks back to the community. Greig’s public relations firm built the program’s website, handles its social media, develops marketing strategies and promotes its media.

“They’re redeveloping smartly, and they’re doing it better than it was done before as far as revitalizing neighborhoods and bringing back communities,” Greig said.

Greig’s tie to New Orleans doesn’t end there. Last February, she led a massive Mardi Gras parade down the city’s historic St. Charles Avenue as goddess of the Mystic Krewe of Nyx. The krewe, which formed in 2012, carries out charity and philanthropic work throughout New Orleans. Greig became involved with the krewe because of her role as president of the Military Officers’ Wives Club of Greater New Orleans. This year, she is helping fundraise for Hero Dogs, a group that trains service dogs for military veterans.

Greig once thought New Orleans would be just another stop on a longer journey. But now, after 26 years, she can safely say she’s found her destination.

“There’s just something special about the people here and the culture here,” she said. “Hurricane Katrina and Mardi Gras just makes you tied to that community in a way that you might not be in other places.” 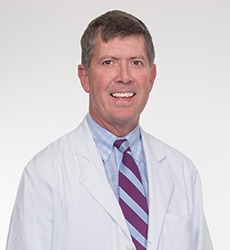 “Each step of the way, I give a lot of credit to Ohio State for giving me opportunities and educating me in the way that they did, and I always felt like I wanted to do something to give back to the community.”

Mark Peters grew up with scarlet and gray in his blood. His uncle was a professor at Ohio State, and both were huge fans of Buckeye sports. So, when it came time for Peters to go to college, it was no surprise that he packed his bags for Columbus. He had planned on becoming a doctor, but his journey to medical school was not as typical as others.”

“I went to Ohio State with the intent of ultimately going to medical school, but I ended up exploring different pathways. I had always really liked math and had excelled at it in high school, so I pursued a degree in mathematics — and enjoyed every minute of it.”

His undergraduate years as a math major prepared him for the next step in his education: attending medical school at, you guessed it, Ohio State. Once he completed the program in 1987, he moved on to his residency, focusing on internal medicine and pediatrics. From there, he became a pulmonary specialist for both adults and children, practicing in Nashville, Tennessee. Peters and his family have been in Nashville since 2001, but it wasn’t until three years later that he started doing outreach work in Haiti.

“When I got to Nashville, our church had just started a relationship with a parish in Gobert, Haiti, and one of the organizers asked me to participate in the trip. We arrived at this village in a very rural area of northwestern Haiti in the mountains and worked pretty much from dawn until dusk,” Peters said. “When I left that first time, I thought that I’d never return. After several months of reflection, however, I went back the next year and just never stopped going back.”

Peters has been traveling back and forth to Haiti for 15 years now, with no plans to stop any time soon. His missions are primarily medical, but they also focus on clean water projects at the same time, because many of the primary forms of disease in Haiti are caused by dirty water. In addition to clean water and general medical care, the mission offers women’s health services and, for the past few years, dental care.

“About three years ago, I became involved with an organization called Be Happy Haiti, which does dental prevention for school-aged children. It’s rewarding not only because of the students I got to work with, but also because this was a chance to utilize preventative medicine, rather than reactive medicine.”

For Peters, it’s important to pay forward, and he’s hopeful about the future of the missions. “Haiti is always going to have a place in my heart. I’ve fallen in love with the country, and I will continue to go back there as long as I am able, which hopefully will be a very long time.”

“I’m looking to really expand things that we’ve already done, including the Be Happy Haiti program, into other communities, mostly because I think prevention is really the way to go. If we can do more preventative care with the clean water, women’s health, dental care, immunizations and others, that would be ideal.”

And, though his journey has been long, Peters has not forgotten his time in Columbus and the impact it’s had on him, every step of the way.

“I am continually reminded what a great gift I was given to be able to attend such an amazing university and am so grateful to have had that opportunity. I’d love for others to have the same opportunity as well, and not only that, but to utilize the talents and the tools they gained at Ohio State to give back to their community.” 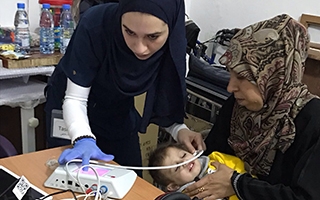