Ashley (Bartman) Watson (BS, chemistry and BA, art history, 2012; JD, 2017) grew up a Buckeye fan, in Toledo, Ohio. It may have been inevitable that this daughter of an Ohio State alumnus would come to Columbus. In 2007, she joined chemistry professor Terry Gustafson's London Honors group. A weekly presentation preparing for the London trip centered on a scientist who used spectroscopy to study pigments of old manuscripts.

“Before Professor Gustafson’s group, I had never heard of using science to study art and historical documents,” said Watson. After talking to him, I added the art history major combining my three loves — chemistry, art and history.”

She began work as an assistant paper conservator at Ohio State Libraries and her interests found their way into her undergraduate thesis. “Testing, Analysis, and Conservation of a 1566 Tyndale Bible,” examined a Bible once owned by a prominent English family, now housed in Ohio State’s Rare Books Collection.

“Dr. Gustafson helped me examine the book, using spectrometry and chemical analyses. An undergraduate research scholarship supported my travel to England to do research. I found the yellow coating was most likely a beeswax and turpentine mixture, with a yellow pigment — maybe saffron or yellow ochre. I still don’t know why, but maybe it was to preserve or disguise.”

Her junior year, Watson studied art conservation abroad — a true combination of chemistry and art history.  After graduation, she began a graduate program in art history and museum studies that offered an opportunity to work with conservators and curators at the Cleveland Museum of Art.

“My chemistry background was a real asset when it came to understanding how art should be displayed to avoid damage,” Watson said. “I also got to research the provenance of items that came into the collection under suspicious circumstances. I realized lawyers can play an important role in establishing museum ethics practices and fighting for the rights of artists and art works.”

Watson then returned to Ohio State to begin law school, and today, she is an associate at Brennan, Manna & Diamond, LLC in Columbus. She focuses on health law, but art law is still on her mind. “As I get established in the legal community, I want to work with artists and museums in the Columbus area and throughout Ohio.”

Her husband, a clinical research coordinator in Ohio State’s Nephrology department, is another connection to science — and is a connection that naturally began at Ohio State. They met their freshman year when they lived on the same floor of Lincoln Tower.

“Though my path has been, and still remains, quite circuitous, I have an enduring passion for both the sciences and the arts,” said Watson. “I look forward to seeing how they manifest themselves in the future.”

You cannot be afraid to fail. As high-school valedictorian, I thought I was pretty smart. However, when I walked into Honors Chemistry that first day, I quickly realized I was not the smartest person in that room, in fact—nowhere close. Getting a B seemed like a huge failure, but I had to get one (or a few) to realize that learning is not about the grades. Grades are important, but failure, however you might classify that term, is how you learn." 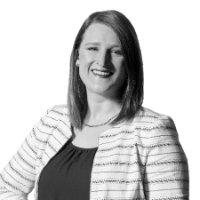