While still in high school, Ben Leubitz began producing and promoting DIY metal, punk, and hip hop shows with the sole motivation of being able to attend the concerts. “My mom was very protective and the only way I could go was by managing the shows -- everything from venue, talent and marketing to tickets, security and concessions”

He came to Ohio State as an engineering major, while still booking shows all over the state in cities like Athens, Cleveland, Cincinnati, Columbus and Toledo. He even booked mini tours for several acts, including the now-hit band Twenty One Pilots.

Eventually, Leubitz switched his major to marketing, and was in an advisor’s office when he saw a list of minors, including the Music, Media and Enterprise (MME) minor offered by the School of Music.

“I thought that sounded pretty cool, and suddenly realized this [side endeavor] could actually become a job!”

Today, Leubitz works as a booking coordinator at Paradigm Talent Agency in New York City, where he works with a team to help create, build and manage artists’ touring businesses and careers.

He says he owes a lot to the MME minor at Ohio State for positioning himself for his current job. “Dr. B (David Bruenger, director of the program) loved going into deep discussions about the music business and different business models,” he said. “He got us thinking about how to wrap your head around an industry that can be really hard to break into. He helped us learn how to analyze our decisions, break into the business and do some great networking.”

The minor also helped him look at some of the practical considerations of going into an entertainment field.

His job today keeps him on his toes from very early in the morning till the wee hours of the night, working on everything from getting show offers and scheduling to helping with artists’ immigration planning and concert contracts. “There’s really no typical day, but I just have learned to go after problems proactively and put out fires as they come up,” he said. “I love the fast pace of my job.” 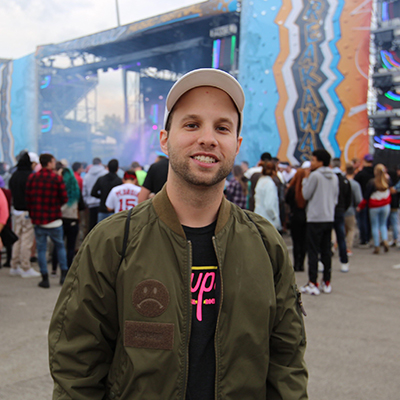