Alumnus Edward A. Gutiérrez (PhD, history, 2008) received the University of Hartford's Sustained Excellence in Teaching Award, which recognizes outstanding contributions to teaching and learning by part-time faculty. He is an adjunct professor in Hartford's history department.

Gutiérrez's scholarship has earned him several awards, including the 2010-2011 "War and Trauma, Memory and Memorialization" Fellowship from the Centre National de la Recherche Scientifique (CNRS), France; and a 2010-2011 Harry Frank Guggenheim Foundation Fellowship to complete the publication of, “Sherman was Right: The Experience of AEF Soldiers in the Great War," a study of the ways combat affects ordinary men and women. 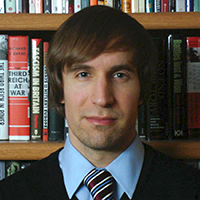