Farhad Choksy is a fourth-year senior, majoring in political science. From Irvine, California, Choksy is keenly interested in voter behavior, political psychology and the orle of big data and government. He recently placed first in the Denman Undergraduate Research Forum for his research project, Trust me: A look into whether Disclosure Mechanisms Effect Vote Choice.

How did you come up with the idea for your research project?

I took a semester off to intern at The Center for Responsive Politics in Washington, D.C. I truly became passionate about the issue of money in politics and how it is an issue that effects the entire American political system. This passion continued once I got back to Ohio State. It sparked my idea to research campaign finance reform attempts from a voter’s perspective, and see if disclosure mechanisms can truly impact our vote choice.

I also worked for EMC Research, a polling firm here in Columbus where I learned more about using surveys to measure campaign finance attitudes. So, I came up with this question for my Denman project:

If voters see where a politician gets his/her money from, will it change their votes?

How did you collect and conduct your research and what were the results?

Why did you choose the political science program at Ohio State?

The political science program and faculty here are great! I also wanted to experience something different.

I would like to expand my research to other places outside of Ohio and Southern California. I would love to take my work to a think tank or a research institute, that is my dream. In the meantime, I will continue to do research in an academic setting. 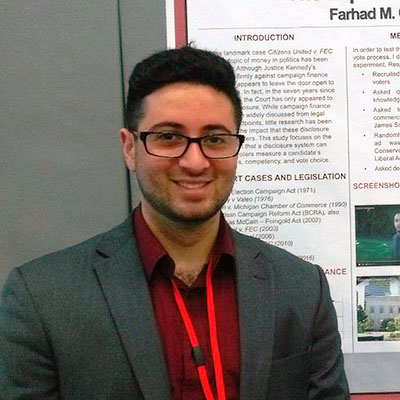