BUT FOR OHIO STATE, WORLD WAR II WOULD ONLY LIVE IN TEXTBOOKS.

Students recorded veterans’ stories, learning lessons that cannot be taught in any classroom.

History/political science major Nick Brill said, “As I talked with Sergeant Rigell, I realized that war stories are not simply stories about what occurred here in the Pacific during World War II, not just memories of actions past; but a window into a way of life forged on these islands, on the beaches and in the jungles where these men fought for and died for each other. This war defined their generation’s character. Embedded in these stories I saw courage, humility, empathy, honor, and selflessness. He taught me not just about the war, but how to live life. I believe this is the greatest legacy of the trip.”

The tour was co-led by College of Arts and Sciences History Professor Peter Mansoor, who as Colonel Mansoor led the 1st Brigade, 1st Armored Division in Iraq from 2003 to 2005. His brigade received a President Unit Citation for collective valor in combat. 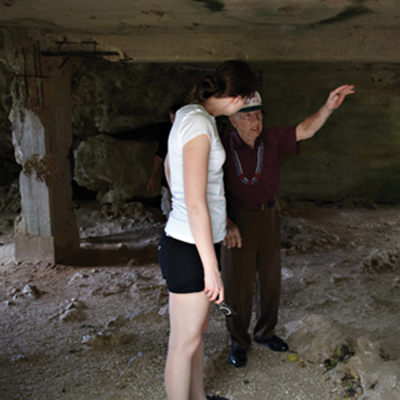